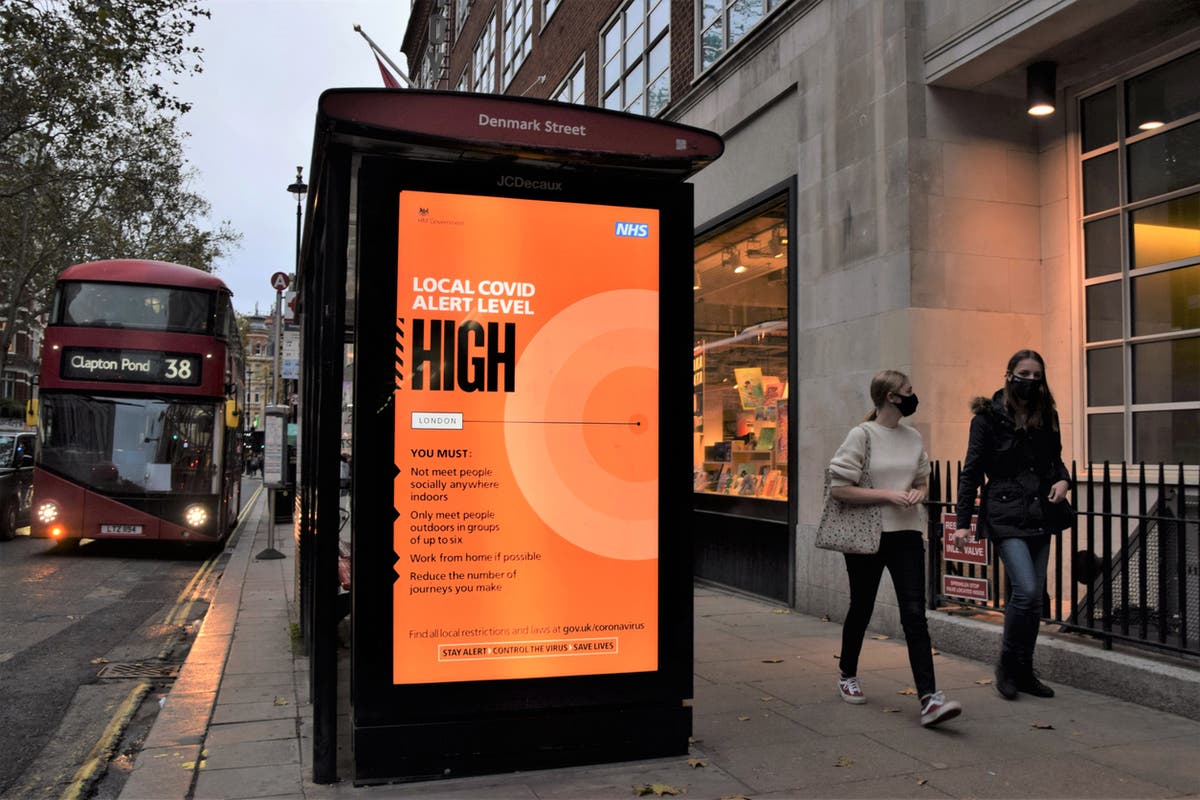 The emergence of the omicron variant of the coronavirus in southern Africa last month is causing concern around the world, not least because it is thought to be highly transmissible and because the 32 mutations of its spike protein suggest it might be able to resist current vaccines.

On Monday, the UK confirmed the first death from the new variant globally while health secretary Sajid Javid estimated that the rate of omicron infections was already at around 200,000 per day, with the strain expected to become dominant in London within 48 hours.

NHS England meanwhile announced that it will return to its highest level of emergency preparedness, level four national incident, meaning that the NHS response to omicron will be coordinated as a national effort rather than led by individual trusts.

Confirmed Covid cases have since risen to 59,610 in the latest figures, with daily deaths up to 150.

Boris Johnson’s government has been relatively quick to act this time around and has imposed its first social restrictions on the public since his ill-conceived “Freedom Day” of 19 July.

As preventative measures against omicron, Britons are again being ordered to wear face masks in shops, cinemas, theatres and places of worship and on public transport, to work from home order where possible and to show an NHS Covid pass in return for entry to nightclubs and other large venues and for outdoor events where there are more than 4,000 people, measures voted through the House of Commons despite a significant Tory revolt.

The government is further revising its approach to booster jabs, planning to make them available to all over-18s by the end of December and halving the amount of time between second and third injections from six months to three, all in the hope of staving off a “tidal wave” of infections.

A “Plan C” for further tightening social restrictions is currently being drawn up should the omicron outbreak worsen over the festive season and into the new year but, as for imposing a fourth national lockdown, that is considered the most extreme measure that could be taken, given the brutal economic toll it takes.

However, it could eventually become necessary and Professor Neil Ferguson of Imperial College London, a member of the government’s Scientific Advisory Group for Emergencies (Sage), told BBC Radio 4’s Today programme last week that such a step could no longer be ruled out despite Britain’s high rate of vaccination.

When last pressed on the question, Mr Javid told the BBC’s Andrew Marr in late November that Britain is “nowhere near” that stage yet and advised people to continue planning for Christmas as normal, a message subsequently repeated on Sky News by minister Gillian Keegan, who insisted the festive season remains “on track”.

But, when asked by Tory MP Richard Drax in the House of Commons whether he could promise there would be no further lockdowns, Mr Javid was unable to make a definite commitment, which is understandable given how much remains unknown about the new variant.

Both the PM and Mr Javid have repeatedly declined opportunities to definitively rule out tougher measures, with transport secretary Grant Shapps saying Parliament would be recalled over Christmas to vote on new restrictions should they become necessary.

Even before omicron began to cast its sinister shadow across the globe, many Britons were already glancing anxiously towards the continent as Austria and the Netherlands reintroduced lockdowns in response to spiking cases of Covid-19.

The World Health Organisation (WHO) had said it was “very worried” about the spread in Europe and warned 700,000 more deaths could be recorded by March unless urgent action is taken, bringing the total to 2.2 million since the pandemic began.

WHO has since expressed its concern about omicron, which threatens to wreak even more havoc.

Prior to these latest worrying developments, Mr Johnson’s government had been highly reluctant to reimpose restrictions despite consistently high case numbers, preferring to pass the responsibility for personal safety onto the public and pursue its “Plan A” of promoting vaccine take-up and boosters to counter the waning of the country’s currently impressive level of immunity.

According to the government’s figures, 41.9 per cent of the British population aged over 12 have had a third jab so far, but the increased threat level should see that figure climb rapidly, with demand expected to spike at drop-in centres at weekends.

Mr Johnson’s single-minded approach to the crisis this autumn has continued to attract criticism, with Kamlesh Khunti, a professor of primary care diabetes and vascular medicine and another Sage member, warning in mid-November that ministers in England have “lost the message” .

Professor Khunti said politicians needed to take Covid “more seriously”, arguing that citizens had become negligent regarding masks and avoiding crowded, unventilated spaces thanks to the poor example of their elected representatives.

Conserative peer Sir Desmond Swayne recently branding masks “mumbo-jumbo” and arrogantly claiming he is exempt from wearing one “due to my genetic predisposition for liberty” is precisely the attitude to which the professor was referring.

“There’s no room for complacency,” Professor Lawrence Young, a virologist at the University of Warwick, said last week. “Although we’re doing well at the moment, we’re not out of the woods yet. The government needs to keep urging people to get vaccinated and boosted, if eligible, but also to behave cautiously.”

While the vaccines have kept death rates low since the spring, the UK’s infection level has remained consistently high, typically hovering around the 40,000-per-day mark but more recently climbing closer to 60,000.

But the prime minister nevertheless refused to bend to scientists’ calls for the implementation of “Plan B” until it became unavoidable, no doubt out of fear that such a step could jeopardise Britain’s stumbling economic recovery.

What do you think? Tell us in our poll below

He might also have been keen to ward off the inevitable anger it would provoke, having seen anti-lockdown protests — some of them violent — erupt in Austria, the Netherlands, Belgium, Switzerland, Denmark, Italy and Croatia.

Londoners were certainly unhappy about the initial return of the mask mandate, accusing the PM of hypocrisy for declining to wear one himself at several public engagements.

However, in other quarters, there appeared to be a clear appetite for new restrictions even before omicron, at least according to the polls.

A recent survey of 900 managers and 1,200 employees carried out by Hack Future Lab found 53 per cent would welcome a “festive lockdown” for the sake of their own well-being after struggling to come to terms with the return to ordinary working conditions, often finding themselves forced to take on extra tasks to cover for absent colleagues.

Another poll by Savanta ComRes revealed 45 per cent of adults would be in favour of a selective lockdown targeting only those who had declined to get their Covid jabs and therefore could pose an ongoing risk to others.

Until Mr Johnson’s initial press conference on Saturday 27 November announcing the first set of changes coming into effect from 4am the following Tuesday, the government’s line had continued to be that it was keeping a close eye on the data and was ready to act, with a “firebreak” lockdown up its sleeve if needed, but would only do so if it became absolutely necessary – if the number of cases of Covid and winter flu again threatened to overwhelm the NHS, for instance.

Asked about the prospect of a new national lockdown on Sky News in October, business secretary Kwasi Kwarteng had answered categorically: “I would rule that out.”

And, until omicron threw a fresh spanner into the works, there was a credible case for believing that the UK was in such a strong position that it could avoid the worst of the outbreak currently marauding across Europe.

Although Britain’s infection rate has remained high for months, it has also been highly stable, lingering at a seven-day average of around 600 daily cases per million people, whereas Austria and the Netherlands have suddenly spiked to 1,500 and 1,250 respectively from well below that starting point since the beginning of October.

Part of the reason for this is that the UK was hit by the more infectious alpha and delta variants of the coronavirus sooner and was therefore able to tackle them ahead of its European neighbours and unlock earlier.

That strategy had been endorsed by chief medical officer Professor Chris Whitty and chief scientific adviser Sir Patrick Vallance because it meant Britain could take the hit in summer rather than waiting until flu season when more people were socialising indoors in response to plummeting temperatures.

Another key strength, which should continue to play a crucial role, whatever happens next, is the level of immunity built up by Britain’s strong vaccine rollout, which began back on 8 December 2020 when Coventry grandmother Margaret Keenan, 91, became the first person in the world to receive her jab.

The robustness of the UK’s immunity was demonstrated in late October by projections from the London School of Hygiene and Tropical Medicine, which found that, if everyone in the country were to be exposed to the virus, just 32 people out of 100,000 would end up in hospital, compared with 800 in Romania.

“We may be in the strongest position, but we could still see cases double and that would cause problems,” cautioned the study’s lead author, Dr Lloyd Chapman, in an interview with the BBC.

That outlook is representative of the opinion of many Sage experts, with Professor Whitty telling the CBI Annual Conference recently that the UK was still “firmly in Covid” and urging business leaders to help its staff get vaccinated and improve workplace ventilation systems to prevent the spread of the coronavirus and flu.

As always with this pandemic, so much remains unknown and nothing can ever be definitively ruled out.

Many will be haunted by memories of Christmas 2020, when plans had to be changed at the last moment to rein in climbing case numbers, and families were left frustrated, disappointed and unable to see vulnerable loved ones.

While the festive television adverts already being rolled out might be busy encouraging reckless spending and promising a bumper Yuletide to compensate for last year (while stocks last, that is), many would do well to temper their excitement by recalling the haunting words of public health professor Gabriel Scally from last December.

“There is no point having a very merry Christmas and then burying friends and relations in January and February,” he said.