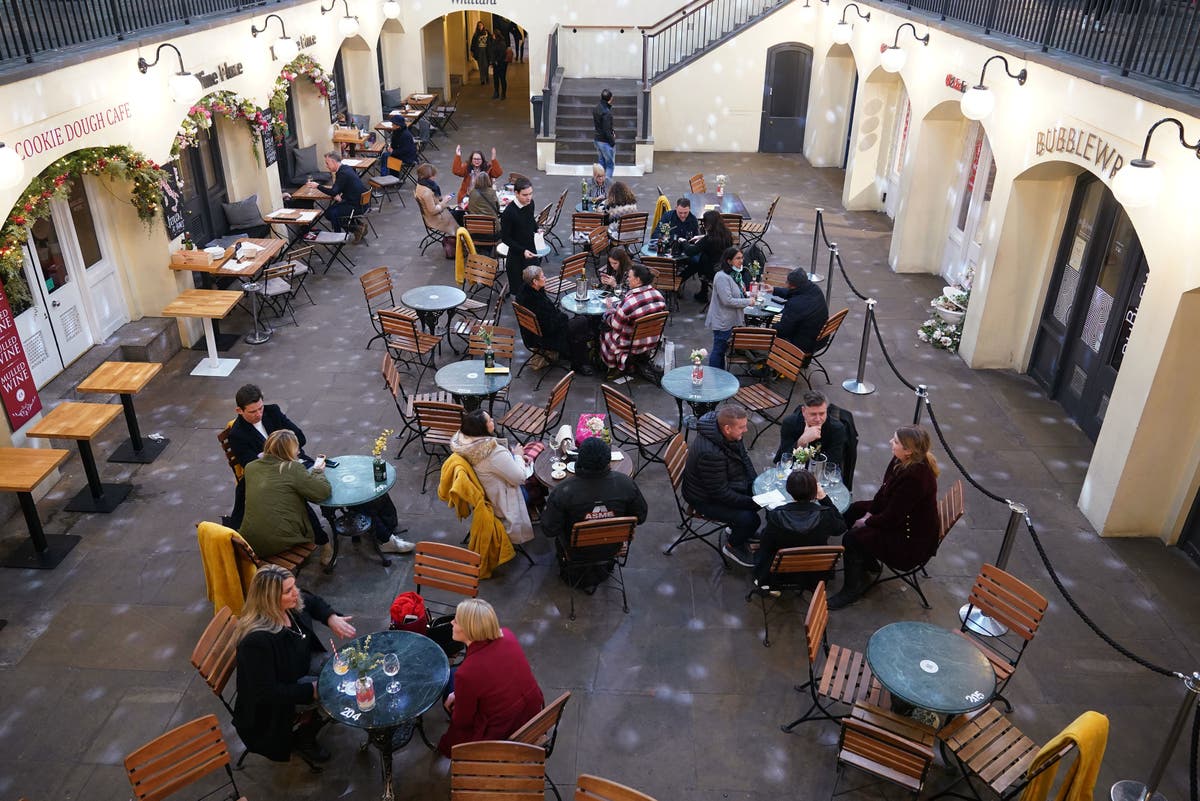 ritain’s Omicron R number is estimated to be between three and five, officials have revealed.

That means the a single person infected with the new Covid variant will go on to infect between three and five other people, on average – a clear sign the strain is on the rampage across the UK.

It comes after England’s chief medical officer Chris Whitty said it is “entirely possible” that the number of daily hospital admissions because of the Omicron variant could exceed the record set for Covid in January.

He told MPs on the health committee on Thursday the previous peak – 4,583 – could be exceeded.

Two-thirds of Covid cases in London are Omicron

More than two-thirds of Covid-19 cases in London are now estimated to be Omicron as it sweeps rapidly through the city.

Initial analysis by health chiefs showed the capital is being hit by a huge wave of the new variant, with cases of Delta also still rising.

Downing Street signalled there were no plans to ban French travellers from the UK after restrictions were imposed by Paris.

The Prime Minister’s official spokesman said the UK had been made aware of the announcement in advance, and Transport Secretary Grant Shapps had spoken to his French counterpart.

When asked if there were any plans for measures at UK borders, the spokesman said: “I mean we think, given the rising Omicron cases around the world, a red list and sort of tighter border measures wouldn’t be effective or proportionate in slowing the import of Omicron from abroad.”

The boss of pub group Young’s has called for Chancellor Rishi Sunak to “show up” and re-introduce a lower rate of VAT and business rates holidays.

Patrick Dardis, chief executive of 220-strong group, said: “I have no idea where Rishi Sunak is right now but he needs to show up and give the industry his backing.

“There are thousands of businesses – not just pubs – that could collapse in January if the current situation isn’t partnered with proper financial support.

“We have given up on this being the fantastic Christmas we had hoped, but will obviously continue to do our all for all the customers still with bookings.”

Chancellor Rishi Sunak is to hold talks with representatives of the hospitality sector seeking further Government support following the emergence of the Omicron variant, Downing Street has said.

The Prime Minister’s official spokesman said that Mr Sunak – who is currently in California – and Treasury chief secretary Simon Clarke would be speaking to about a dozen representatives from the sector later on Thursday.

Omicron is “spreading exceptionally fast, much faster than anything experienced so far in the pandemic”, Nicola Sturgeons has said.

She told MSPs in the Scottish Parliament: “Let me be clear, this is not a choice between protecting health and protecting the economy.”

She said a surge in infections “will cause and indeed is already causing staff absences that will also cripple the economy and other critical services”.

She added: “Please reduce your contact with people from households other than your own as much as you possibly can. For now, please stay at home much more than you normally would and as much as is feasible.

“Right now the risk of getting Covid from interactions with others is high and it is rising. So ask yourself before doing anything you might have planned over the coming days, is it as safe as it needs to be and is it vital enough to you to justify that risk.

“I suspect what is most important to most of us over the next couple of weeks is having time with our families at Christmas. Every interaction we have before then increases the risk of us getting Covid and so possibly losing that”

Music venues are calling on the Government to provide a “raft of financial assistance” to the live music sector as it struggles due to the rise of Covid-19 case numbers and the spread of the Omicron variant.

“We are now facing a crippling blow as individual venues scramble to cover the spiralling costs of Covid-related cancellations, which will inevitably result in permanent closures.

“The Government must step up to the plate and provide a raft of financial assistance now if it is to avoid much-loved live music venues and businesses closing up shop for good.”

Prof Whitty said he anticipates the height of the Omicron wave will fall faster than previous Covid-19 peaks.

He told the Commons Health and Social Care Committee: “I think what we will see with this – and I think we are seeing it in South Africa – is that the upswing will be incredibly fast, even if people are taking more cautious actions, as they are.

“That will help slow it down, but it’s still going to be very fast.

“It’ll probably therefore peak really quite fast. My anticipation is it may then come down faster than previous peaks but I wouldn’t want to say that for sure.

“I’m just saying that that is a possibility.”

The Oxford English Dictionary has updated its definition of ‘hybrid’ to incorporate hybrid working, reflecting the importance this practice has had over the past year.

Plan B measures introduced by the Prime Minister to limit the spead of the Omicron variant ask people to work from home where possible.

Mark Dixon, founder of IWG said: “Millions are now working long term in the hybrid model, so the Oxford English Dictionary’s decision to add hybrid working into the dictionary is very much welcomed to reinforce that hybrid working is here to stay.

“Hybrid working is delivering spectacular benefits for employees and employers alike. Team members gain better mental health and reduced costs through not having to travel into city centres, along with greater career opportunities closer to home.

“Not only that, but it gives companies the financial flexibility to invest in their staff and in growing the business, instead of the buildings from which they operate”.

The Queen has cancelled her traditional pre-Christmas family lunch next week.

It is understood the decision was a precaution with a source suggesting it could put too many people’s Christmas arrangements at risk if it went ahead.

Boris Johnson denied he was imposing a lockdown by stealth.

Speaking to broadcasters, the Prime Minister said the situation was “very different” from last year.

He said: “What we have is the additional protection of the vaccines, and the ability to test.

“But we’re not saying that we want to cancel stuff, we’re not locking stuff down, and the fastest route back to normality is to get boosted.”