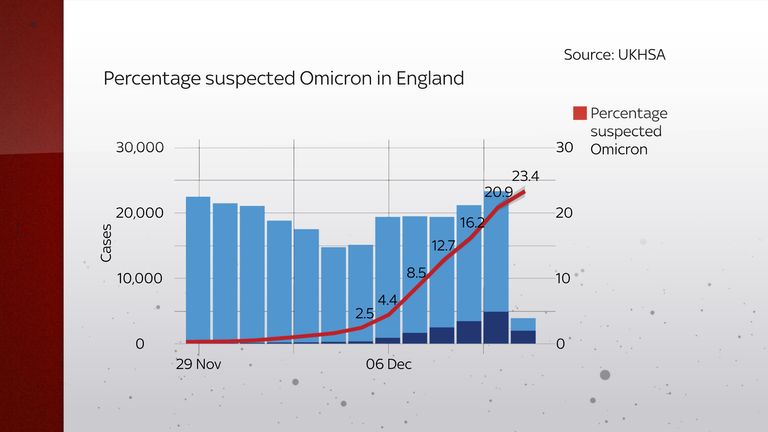 Omicron has now overtaken Delta as the dominant variant in London – and other regions are just a few days behind on the growth curve, new data suggests.

The figures, released by the UK Health Security Agency, reveal Omicron hotspots across England, with the East, South East and North West also having high rates.

The data also shows five people are in hospital suspected of being infected with the Omicron strain, in addition to the 10 confirmed cases already reported by the UKHSA.

The figures are based on PCR tests at four Lighthouse laboratories which can distinguish between Omicron and Delta, the other widely circulating variant in the UK, with a high degree of confidence.

The data shows that across England 24% of cases with specimen dates of 11 December and 12 December were likely to be due to Omicron.

But in London it was 51.8%, making Omicron the dominant strain of the virus. 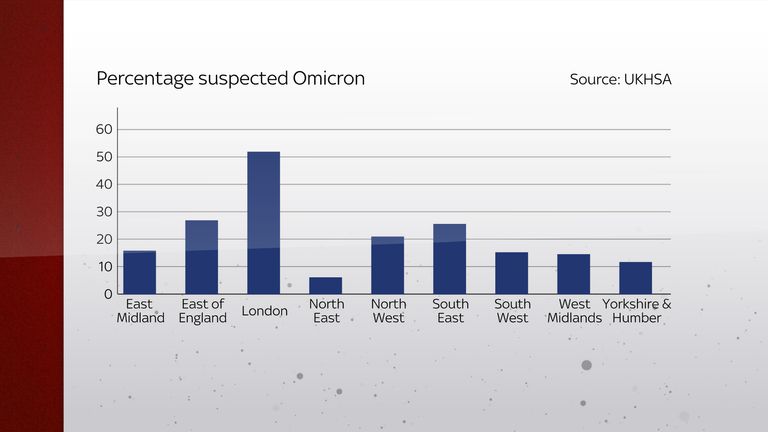 Image:
Omicron is now the dominant variant in London

Omicron is also likely to become dominant in those regions in the next three to four days, if cases follow the growth curve in London.

The North East had the lowest rates at just 6.8%.

What proof do you need for a COVID pass – and where will you need one?

Not all laboratories around the country contributed to the data and the Omicron rate in some regions may be higher.

PCR tests target three genes on the virus that causes COVID. Delta shows up positive at all three sites, but a mutation in Omicron means the test comes back as a blank for one of the genes, so-called S-gene dropout.

The figures were based on 9,156 samples where the presence or absence of the S-gene could be established.

The rate of growth is fastest in London. The proportion of COVID cases likely to be due to Omicron rose from 44.5% to 51.8% in just 24 hours.