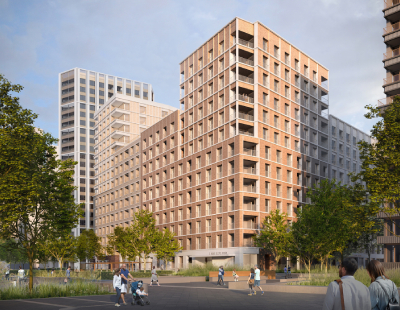 The acquisition also paves the way for the launch of London Square Living, the company’s new BTR division, which sources sites and develops them for rental.

A new partnership has been agreed with Moda Living, launching with Nine Elms Park. The BTR specialists will develop 437 ‘best-in-class’ apartments across two blocks ranging from nine to 13 storeys. The latest scheme will benefit from Moda’s usual provision of amenities including private dining rooms, resident gardens, 24-hour concierge, cinema room, co-working spaces with meeting rooms, gyms, sun decks and children’s play areas. All of the buildings sit at the heart of the wider Nine Elms Park masterplan, overlooking a central landscaped park.

The regeneration scheme, while huge, has faced criticism from some, who criticise it for lacking soul, for being too unaffordable and for being too full of shiny skyscrapers. The scheme’s issues were laid out in a Guardian article earlier this year.

Despite its prominence in the sector, Nine Elms Park will be Moda Living’s first London scheme. It is situated in Zone 1, designed exclusively for rent and will be operated by Moda ‘for the long term’. There are plans in place for the blocks to have 103 affordable rent homes, to be managed by Paragon Asra Housing, alongside 30 affordable BTR homes. London Square will be responsible for the construction.

The masterplan for Nine Elms Park has been created by Allies and Morrison, with architects Morris & Company and Gort Scott collaborating on the Moda buildings.

What’s more, the development will complete the last section of Nine Elms Park, which is located in the Vauxhall Nine Elms Battersea Opportunity Area. Spanning more than 560 acres, the area is the largest regeneration zone in Central London, aiming to deliver 20,000 new homes and 25,000 new jobs.

In addition, a Linear Park has been created to form a green ribbon of landscaped routes through Nine Elms Park, connecting public squares, green spaces, shops, cafes, and restaurants. The park, which runs through Nine Elms from Battersea Power Station to Vauxhall Cross, links at four key points to the Thames Path.

Nine Elms Park will aim to deliver nearly 2,000 homes and a primary school, as well as retail and commercial opportunities at street level. As well as the US Embassy nearby, Apple, Penguin Random House and the Royal College of Art will be moving into the regeneration zone.

Nine Elms, which is within walking distance of the Houses of Parliament and the South Bank, recently saw a station bearing its name open on the Northern Line, as part of that line’s much-awaited extension. This, as well as a new station at Battersea Power Station, means Westminster, the City and Leicester Square are all within a 15-minute tube journey.

We explored the area, formerly one of the capital’s largest industrial hotspots, in our London regeneration series a few years ago, and have since covered a range of stories on the regeneration site, which continues to divide opinion more than most.

Adam Lawrence, chief executive at London Square, said: “We are delighted to be working with Moda Living, with its excellent reputation for delivering high-quality homes and lifestyles. Nine Elms Park is an outstanding opportunity for us, delivering an exceptional landmark 22-storey building with homes for private sale in a prime location and enabling us to showcase the breadth of our offering with the launch of our build-to-rent division, London Square Living. We are building a much-needed pipeline of homes for rent, as well as affordable homes, alongside our longstanding track record of delivering exceptional homes for sale in the capital.”

Johnny Caddick, chief executive of Moda Living, added: “London Square and Ares are fantastic partners to bring forward this world-class masterplan. It’s a statement of our intent that our first London scheme is in Zone 1 alongside the American Embassy. We are excited to bring our brand to London, and this is the perfect place for our flagship scheme.”

Devastated mum of boy, 16, stabbed to death vows to return to Romania after moving to London for a better life