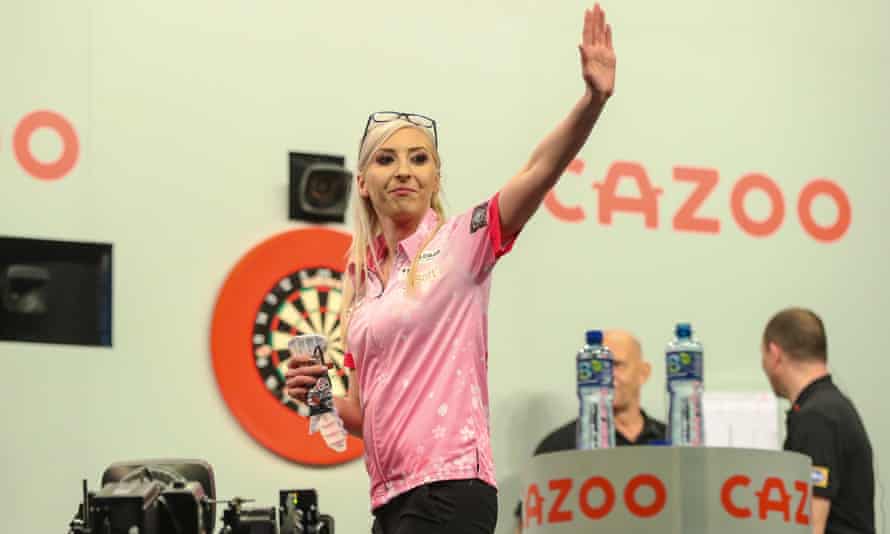 It is the little things that remind us Christmas is just around the corner. The songs on the radio, the plethora of Christmas jumpers … and the sight of thousands of lager-fuelled darts fans descending upon Alexandra Palace in north London for the start of the PDC World Darts Championship.

Few moments on the sporting calendar signify the start of the festive period quite like the darts, and throughout the period of sport being played behind closed doors, few events felt quite as hollow as darts’ biggest tournament of the year did 12 months ago.

Sure, there was the usual drama and tension on the oche, culminating in Gerwyn Price winning the Sid Waddell Trophy and the £500,000 winner’s cheque for the first time. But the sight of spectators returning this year and the world’s best players no longer having to awkwardly gesticulate towards an empty arena every time they hit a crucial double feels like the kind of sporting comfort blanket we have longed for over the past two years. It all begins in earnest on Wednesday evening with a compelling opening session that is headlined by Price, the 36-year-old former rugby player from Markham, in south Wales.

In truth the reigning world champion should have little trouble in seeing off either Ritchie Edhouse or Peter Hudson in his first match, but no first-time world champion has possibly ever had as tough a field to defend his title against. There are hazards everywhere you look, and while Price rightly pointed out in the run-up to the event he won’t have to face them all due to the nature of the draw, the real hurdles could come as early as his second match of the event.

Fallon Sherrock No stranger to creating history on the Alexandra Palace stage, Sherrock has been handed a tough draw. She will have to beat both Steve Beaton and Kim Huybrechts to get to round three where a likely tie with the reigning champion, Gerwyn Price, awaits. Sherrock will certainly have the crowd on her side, though.

Ryan Searle The 15th seed has risen up the rankings this year, and if an outsider does lift the trophy, the man known as Heavy Metal is a strong candidate. Searle’s position among the best in the world is all the more remarkable given he suffers with astigmatism, meaning he often can’t see where his darts land.

Raymond van Barneveld Back on the tour after initially retiring from the sport two years ago, the five-time world champion will almost certainly be roared on by a huge support in London. The Dutch legend has performed admirably since returning to darts, and vVan Barneveld will be eyeing another run deep into the tournament this year.

Jonny Clayton The world No 8 has perhaps been the form player of 2021. He has won four televised titles already, including the Premier League. Clayton is one of the most dangerous players on the circuit, and few would fancy facing him.

Rob Cross After his remarkable world title victory on debut in 2018, Cross’s performances faded somewhat. But the 31-year-old has returned to form with a vengeance this year, and he will be one of the biggest threats in the entire field this time around as he hunts a second world crown.

There, he stands to face one of Steve Beaton – the 1996 world champion who is making a record-extending 31st consecutive world championship appearance – the former major finalist Kim Huybrechts or, perhaps most intriguingly of all, Fallon Sherrock. Perhaps it was no bad thing that Sherrock did not qualify for last year’s event when there were no crowds, unlike two years ago when a packed Ally Pally saw her stun Ted Evetts and Mensur Suljovic to put her firmly on the darting map.

Fallon Sherrock reached the third round at the PDC in 2019. Photograph: Shane Healey/ProSports/Shutterstock

Sherrock has been at it again this year too. She became the first woman to qualify for the later stages of the Grand Slam of Darts, and although all eyes will be on her attempt to win a tour card at Q School in January, she could actually secure her place on the professional circuit via prize money if she reaches round four here. However, that almost certainly means she would have to eliminate Price but Sherrock is no stranger to an upset or two.

There are 11 former world champions in this year’s event including the two-time winner, Adrian Lewis, who is also in action on the opening night. Now outside the world’s top 32 – from where invites to the majors are guaranteed – Lewis will need to rekindle past form to spark a push back up the rankings. He faces Canada’s Matt Campbell on Wednesday while Raymond van Barneveld’s return to the Palace after coming out of retirement is a tie with Lourence Ilagan of the Philippines on Monday.

The PDC will certainly hope that the return of full houses at the Palace, which were pretty much guaranteed for every session, come to fruition. Last year, the opening night drew a limited crowd before the government moved London into Tier 3 restrictions, meaning the rest of the tournament was played behind closed doors.

With more than 95% of tickets sold already, and the inevitable knock-on in sales of food, drink and merchandise that go with that, any change to restrictions now could have huge ramifications for a sport that ploughed on commendably in the face of such financial adversity last year. Whether it is Price, Michael van Gerwen or anyone else lifting the trophy aloft on 3 January, you can only hope they do so amid a backdrop they and the sport deserve: a full house at darts’ most recognisable venue.