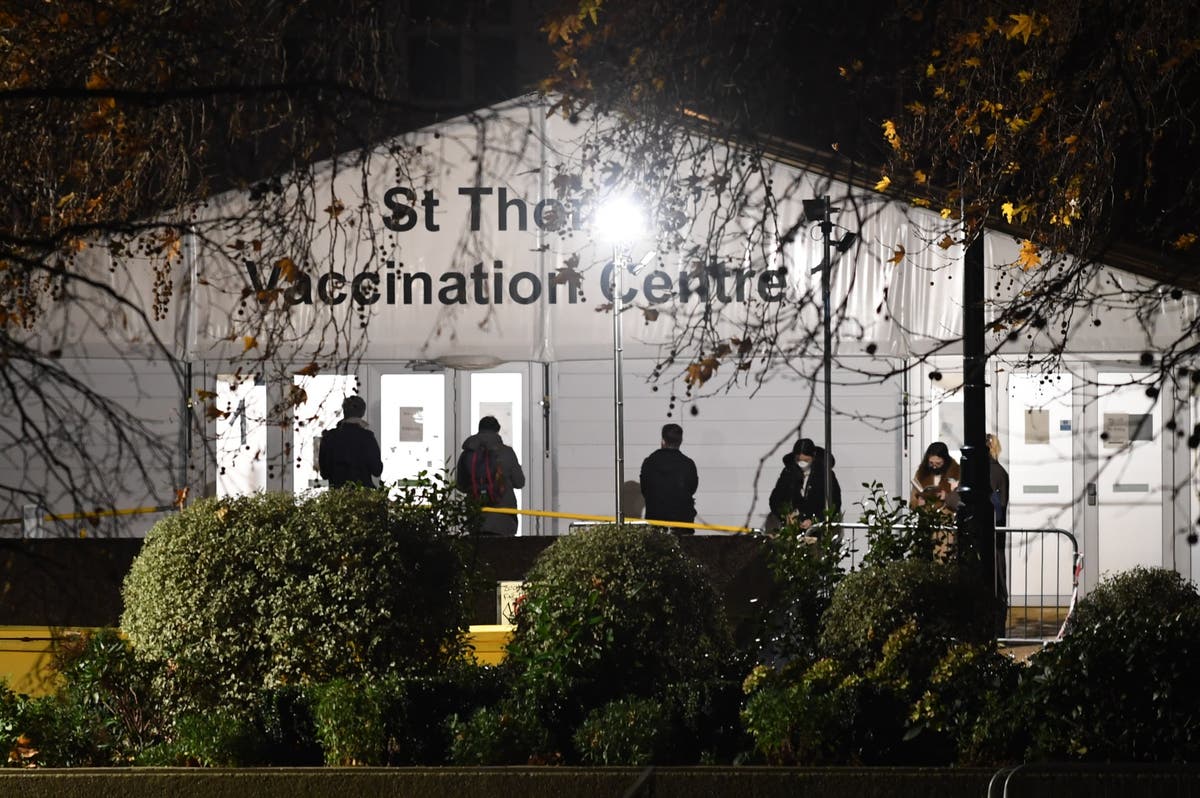 oronavirus cases in London are accelerating at their fastest since the first wave in March 2020, a public health expert said on Wednesday.

He continued: “We’ll be at 100 per cent very soon… that’s why so many people are going down with infections”.

Omicron ‘most significant threat to public health since start of pandemic’

Dr Jenny Harries, chief executive of the UK Health Security Agency, has told MPs the Omicron variant “is probably the most significant threat [to public health] since the start of the pandemic”.

She added the world is probably at too early a stage to be able to tell how serious the increasing infections will be turn out to be.

Transport Secretary Grant Shapps has condemned scenes of the Tory candidate for London mayor partying with staff last Christmas in a breach of coronavirus guidance at the time.

On Tuesday night, a photograph emerged in the Daily Mirror of a previously reported party held by Shaun Bailey’s campaign team at Conservative Headquarters on December 14 last year.

“It is unacceptable for people to be breaking the rules. That was not authorised by the Conservative Party.

“Those Conservatives who were on secondment from the party have already been disciplined and whatever further action needs to be taken will be taken.”

Shapps: We want people to be able to enjoy Christmas

Transport Secretary Grant Shapps has said he believes “with some confidence” that no further Covid restrictions will be required in England before Christmas.

“I think that, with some confidence, that we can say that people are going to be able to enjoy their Christmas get-together with their friends and families with only what has already been (announced).”

Grant Schapps: ‘People are going to be able to enjoy Christmas’

Cases are now at level seen at start of the year, says professor

Covid infections are now at the level seen at the start of the year and are set to go “beyond that” in the coming months, an expert has said.

Graham Medley, professor of infectious disease modelling at the London School of Hygiene and Tropical Medicine, said: “The numbers of infections with Omicron is increasing and has been increasing quite dramatically.

“We’re probably now at the level that we have been in the past, back in January, and it does look as though it’s going to continue beyond that and go over it.”

But he added that we are “in a very different position to this time last year in the sense that the majority of people have been vaccinated”.

Covid cases in London are accelerating more than was seen the very first wave of the virus, a scientist has said.

Professor Tim Spector, who helped found the Covid Zoe app, said the “majority of symptoms” of the Omicron variant are like a common cold, including headaches, sore throat, runny nose, fatigue and sneezing.

He told BBC Radio 4’s Today programme: “In London, where Covid is increasing rapidly, its far more likely to be Covid than it is to be a cold.

“We’re seeing doubling in the numbers equivalent to what’s being seen elsewhere, every two-and-a-half days, and that really means numbers are going up.

“If we look at our regional charts we see London accelerating more than we’ve seen it since the very first wave and this now means that Omicron is the predominant variant already.

“We’ll be at 100 per cent very soon, so that’s happened in just a matter of days – that’s is why so many people are going down with infections.”

Transport Secretary Grant Shapps has said that 10 people have been hospitalised with the Omicron variant – and one person who had a confirmed case of the variant has died.

Mr Shapps added that around 9,000 people have tested positive for Omicron.

The Government’s newest MP was among nearly 100 Tory politicians to oppose his own party’s Covid restrictions, which passed in the House of Commons on Tuesday morning thanks to Labour votes.

The rebellion of 99 Tory MPs against the Government’s Plan ‘B’ saw newcomer Louie French join forces with veterans to vote against the introduction of Covid passes.

Mr French, 33, who won the Old Bexley and Sidcup by-election less than two weeks ago, said he was fulfilling an election promise in doing so.

In a tweet, he said: “I fully support the booster rollout and I will get mine ASAP thanks to the efforts of the Government, NHS, pharmacies, army and volunteers.

“But, I made a clear pre-election pledge that I would not support Covid passes for our domestic economy and voted accordingly.”

Good morning and welcome to the Evening Standard’s live coverage of the Covid pandemic.

The trade union for more than 600,000 workers has described new legislation imposing mandatory vaccines for NHS and non-residential social care staff as “heavy-handed”.

“GMB’s position is consistent – we are opposed to legally enforced medical procedures as a condition of employment – it’s heavy-handed and will deepen the health service’s devastating staff black hole,” she said in a statement.

“Our union has encouraged take up of the vaccine and booster jabs, but the Government needs to look beyond strong-arm tactics.

“While they’re asking front line workers to go above and beyond once again, they are still not paying these workers properly.”

Dozens of Conservative MPs opposed the introduction of vaccinations on Tuesday evening, before the measure was passed by the Commons.

GMB said its members are facing mandatory vaccination while also enduring a “wage crisis” and “cost of living crisis”.

Covid: R number rises in England but falls in London