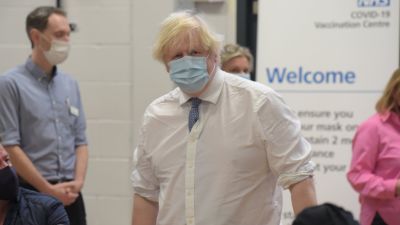 Tap above to watch video report by Simon Harris

Boris Johnson said that Omicron currently represents around 40% of coronavirus cases in London and “tomorrow it’ll be the majority of the cases” in the capital.

Speaking during a visit to a vaccination centre in West London he said: “The risk is plainly there, we can see Omicron spiking now in London and some other parts of the country.

“Here in the capital it probably represents about 40% of the cases. By tomorrow it’ll be the majority of the cases and it’s increasing the whole time.”

Boris Johnson has said those involved in delivering jabs should be “incredibly proud” of the vaccine rollout.

Speaking on a visit to a vaccination clinic in west London, the Prime Minister was asked whether the accelerated delivery of the booster programme announced on Sunday was too little too late.

And he said: “We now want to hit warp speed and we’ll have to attain a pace and a number of daily booster doses that will exceed anything that we’ve done before.

“But I’ve got no doubt at all that we have the people, we have the enthusiasm, we have the fundamental optimism about what we can do, which we’ve learned from the experience of the last 18 months.

“And I know that people are going to rise to this.

Mr Johnson also declined to rule out further coronavirus restrictions being introduced ahead of Christmas as the Omicron variant spikes, as he said the goal is to “offer a booster” to every adult by the end of the year.

“Throughout the pandemic I’ve been at great pains to stress to the public that we have to watch where the pandemic is going and we take whatever steps are necessary to protect public health,” Mr Johnson said.

Transport for London reported a decrease in demand for Tube and bus travel on Monday morning.

About a million London Underground journeys were made between the start of service and 10am.

That is an 18% reduction compared with 1.22 million during the same period a week ago.

Bus usage fell from 1.21 million journeys to 1.15 million over the same period, representing a 5% decline.

A TfL spokesman said: “The Government’s decision to require people to work from home from today will naturally result in a drop in TfL’s ridership.

“We continue to assess what impact this announcement has on overall ridership levels, and crucially our operating income which relies heavily on fares revenue.”