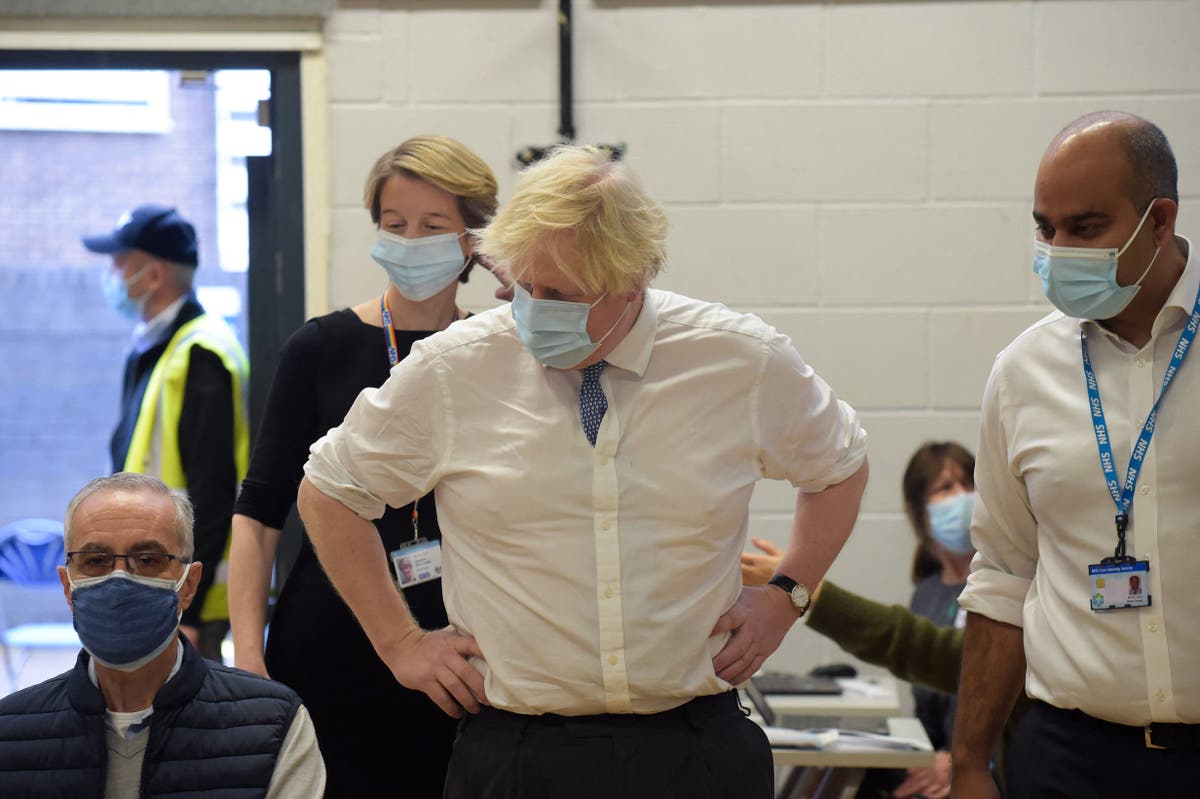 person has died with the Omicron variant of Covid, Boris Johnson said on Monday, as he warned the mutation would become dominant in London as soon as Tuesday.

The PM said the strain was “spiking” in the capital and other parts of the country, stressing that it “is producing hospitalisations” despite reports that it is more mild than feared.

Speaking outside a hospital, he told broadcasters: “Here in the capital it probably represents about 40% of the cases.

“By tomorrow it’ll be the majority of the cases and it’s increasing the whole time.”

Meanwhile, pictures showed large crowds waiting in line outside St Thomas Hospital in Lambeth – hours after the NHS website crashed amid a surge in bookings.

Mr Johnson said scientists had discovered that two doses of a vaccine is “simply not enough” to prevent the spread of the new Covid variant and that, without a lightning speed mass booster campaign, the NHS could be overwhelmed.

The mission to administer millions more jabs to everyone aged 18 and over by December 31 will see 42 military planning teams deployed across every health region.

PM insists ‘he broke no rules’ over Christmas quiz

Boris Johnson has insisted that he “certainly broke no rules” after a newspaper published a picture of him participating in a Zoom Christmas quiz last winter.

Speaking on a visit to a vaccination clinic in west London, the Prime Minister told broadcasters: “All that is being looked into. But if I may respectfully say to you… of course, all that must be properly gone into – you’ll be hearing from the Cabinet Secretary about it all.”

He said the Cabinet Secretary would report back “as soon as we reasonably can”, and the investigation could include a virtual quiz Mr Johnson was pictured at on December 15 last year.

Tube trips down as Plan B comes into force

Plan B rules have clearly had an effect in London, with TfL reporting an 18 per cent reduction in demand for Tube and bus travel this morning compared to last Monday.

Under measures introduced by the Government, Britons are urged to work from home where possible.

However, the policy comes as another blow to London’s beleaguered transport network, which relies on revenue from fares.

A TfL spokesman said: “The Government’s decision to require people to work from home from today will naturally result in a drop in TfL’s ridership.

“We continue to assess what impact this announcement has on overall ridership levels, and crucially our operating income which relies heavily on fares revenue.”

Shadow health secretary Wes Streeting said confirmation of the first person to have died with the Omicron variant “underlines the seriousness of the situation”.

He tweeted: “The awful news of the UK’s first Omicron death underlines the seriousness of the situation and my heart goes out to their family and friends.

“This is why the booster rollout is so vital and public health measures are necessary to reduce its spread.”

PM: Omicron to become dominant in London from tomorrow

The PM said Omicron was “spiking” in London and other parts of the country, stressing that it “is producing hospitalisations” despite reports that it is more mild than feared.

Speaking outside a hospital, he told broadcasters: “Here in the capital it probably represents about 40% of the cases.

“By tomorrow it’ll be the majority of the cases and it’s increasing the whole time.”

The first Omicron patient has died of the disease in hospital, Boris Johnson has confirmed.

Norway will further tighten its Covid restrictions this week in order to limit the spread of the virus, Prime Minister Jonas Gahr Stoere told news agency NTB on Monday.

“The situation is serious. The spread of infection is too high and we have to take action to limit this development,” he said.

Norway is setting record highs both in terms of new infections and in terms of hospitalisations, partly due to the spread of the Omicron variant.

In a new risk assessment released on Monday, the Norwegian Institute of Public Health (FHI) recommended the government act quickly.

“A lack of action now could lead to large negative consequences for society, not just for health services and municipalities,” the FHI wrote.

Starmer to broadcast to the nation on Covid jabs

BBC One will broadcast a pre-recorded address to the nation from Labour leader Sir Keir Starmer at 7pm, Labour has said.

The address will be a response to Boris Johnson’s own remarks on Covid booster vaccines made on Sunday evening.

Hospital admissions from Omicron ‘could double’ those from last January, expert claims

Dr Kit Yates, senior lecturer in mathematical biology at the University of Bath, said hospital admissions from Omicron could be “double” those seen last January.

He told Sky News: “Nadhim Zahawi has done a calculation which is based on exponential growth – yesterday we recorded 1,239 Omicron cases, it’s likely that there were more in the community, we’re missing some.

“And certainly in terms of hospitalisations, there’s been some estimates from Denmark suggesting about 1% of Omicron cases being hospitalised, so if we are up at a million cases, then we could be talking about 10,000 hospitalisations a day, which is more than double what we saw last January.”

Stephen Reicher, professor of psychology at the University of St Andrews, urged people to “think carefully” about their social contacts in the run-up to Christmas.

The member of government advisory body the Scientific Pandemic Insights Group on Behaviours (Spi-B) told ITV’s Good Morning Britain: “At the moment, we’re in a situation where the new variant in effect is coming at us like an express train.

“We’ve got to do something or else we’re in real danger of overwhelming our society and overwhelming the NHS.

“And there’s so many things you can do. The first thing, and the most obvious thing, is that if you reduce the number of social contacts you have you limit the spread of the infection.

“And I think, in the same way, we need to think really seriously about our contacts. How important are they? Do we really need them and is it more important to act carefully now so that the contacts we really want and we really need are still happening?”

NHS reminds those under 30 not to book booster yet

The NHS has reminded those aged under 30 not to book their booster vaccine until Wednesday.

In a tweet, they wrote: “ The COVID vaccine booking service is currently facing extremely high demand so is operating a queueing system.

“For users aged 18-29, please be aware that booking opens on Wednesday 15 Dec.

“For all others experiencing waits, we would advise trying again later today or tomorrow.”