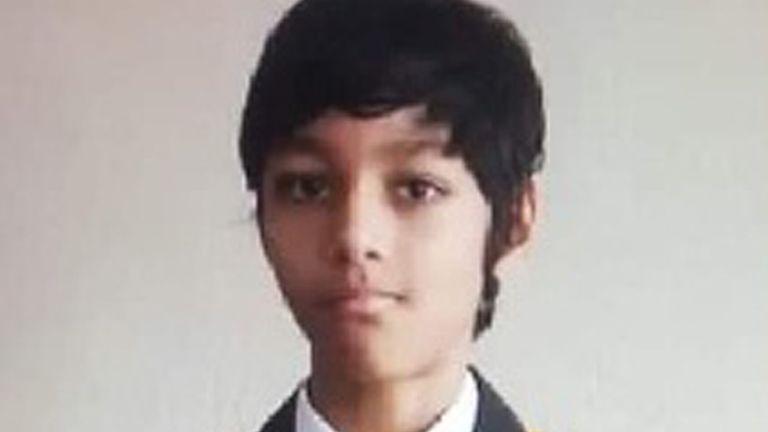 A teenage boy died when he jumped into the River Thames minutes after getting off a bus on his way to school, an inquest has heard.

Thirteen-year-old Zaheid Ali from Southwark, south London, was pulled from the river eight days after plummeting from Tower Bridge on 20 April.

The Year 8 pupil from Ark Globe Academy, in Elephant and Castle, had been travelling to school with a friend but left the bus a stop early before heading to the bridge.

Image:
Zaheid Ali was a pupil at a south London school

Bystanders threw lifebuoys into the water, while others went to save him, but they only managed to retrieve his coat and rucksack, an inquest at Inner London Coroner’s Court heard.

Over a week later, Zaheid’s body was found wearing a school uniform that was labelled with name tags, which helped to identify him.

A post-mortem examination found the cause of the teenager’s death to be “immersion”.

Assistant Coroner Dr Julian Morris said: “He was travelling to school by bus with a friend, got off the bus one stop early and made his way to Tower Bridge.

“He entered the bridge, climbed over the barrier before jumping into the river.

“Witnesses threw lifebuoys into the river and entered the river but were unable to save him.”

The inquest was adjourned and will resume on a date to be set.

Anyone feeling emotionally distressed or suicidal can call Samaritans for help on 116 123 or email [email protected] in the UK. In the US, call the Samaritans branch in your area or 1 (800) 273-TALK

Devastated mum of boy, 16, stabbed to death vows to return to Romania after moving to London for a better life

The hilarious reviews of the Shard left by unimpressed Americans