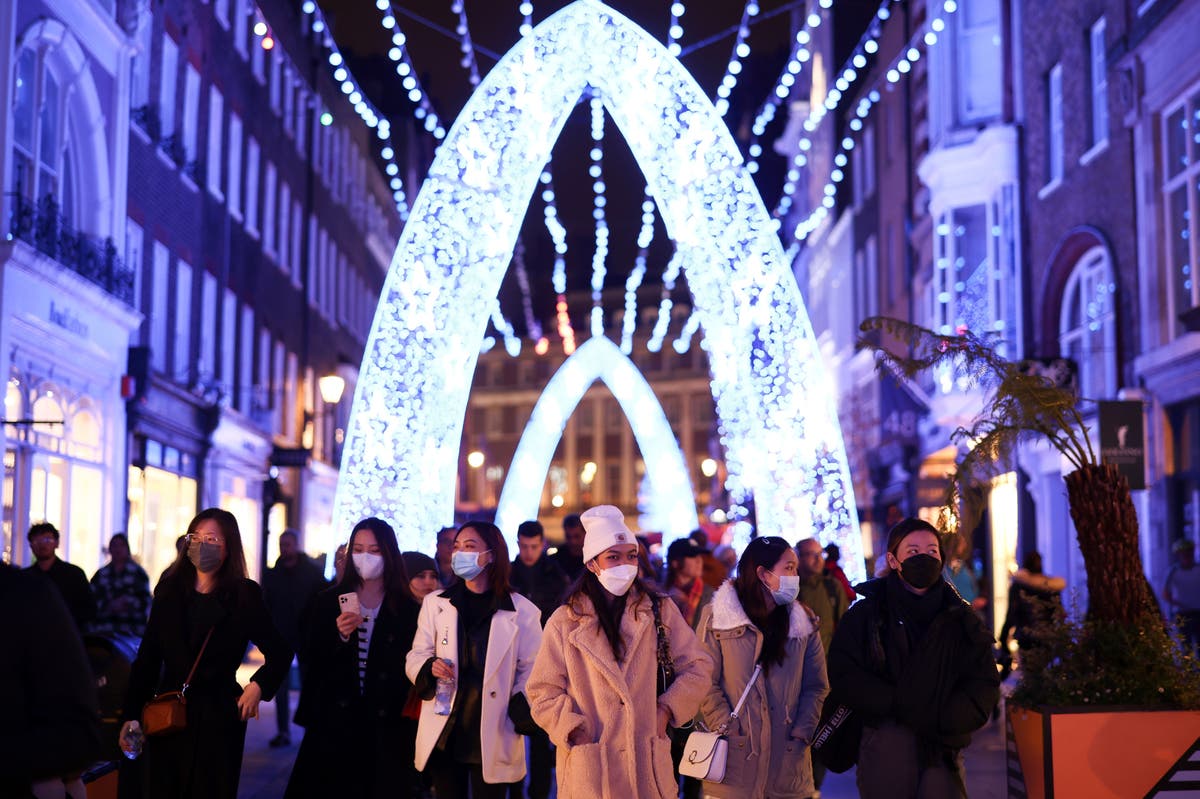 he UK’s top public health officials have advised ministers that “stringent national measures” need to be imposed by 18 December to avoid Covid hospitalisations surpassing last winter’s peak, according to reports.

Sajid Javid, the health secretary, received a presentation from the UK Health and Security Agency (UKHSA) on Tuesday warning that even if the new Omicron variant leads to less serious disease than Delta, it risks overwhelming the NHS with 5,000 people admitted to hospital a day, the Guardian reported.

Manager Patrick Vieira has revealed Crystal Palace will no longer have a Christmas party due to the escalating coronavirus situation in the country.

Vieira, who revealed he is double vaccinated ahead of Sunday’s game with Everton, remembers celebrating during the festive period as a player but revealed a joint decision had been made to scrap such plans for his squad at this time of year.

“This is part of the culture of this country, this Christmas party the players are doing,” he said.

“We did it a couple of years ago and this is something players like to do but obviously with the situation, we and the players decided to cancel the Christmas party and this was the right thing to do.”

Omicron will be dominant variant by early next week, professor warns

Omicron could overtake Delta as the dominant Covid-19 variant as early as next week, an expert has warned.

Professor Jason Leitch, the National Clinical Director of the Scottish Government, told Sky News: “All four countries are managing this the way they think they should. It’s not any different.

“There may be slight variations regionally around England but you’re pretty much where we are.”

He said Omicron will be the dominant variant by the beginning of next week.

“We’ve done this four times now… we’ve had four variants. Unfortunately two of them have come four weeks before Christmas. You couldn’t make this virus up, it’s like fiction.”

In the short film, the drivers take turns to urge fans to get the jab this winter.

Seven-time world champion Hamilton can be seen saying: “We’re finding our way back to things we love but Covid has not gone away.”

Verstappen is seen donning a face mask as he says: “Please do your bit.”

Sebastian Vettel says: “Get vaccinated – I think it’s the sensible thing to do.”

F1 Group chief executive Stefano Domenicali says: “I’ve had my vaccine – actually, I did my booster. Do your bit please.”

Health and Social Care Secretary Sajid Javid said: “It is fantastic to see F1 drivers playing their part, encouraging others to get their top up jab to secure the vital protection they need as the virus goes on the advance this winter.

“More than 21 million people have received their booster jab and I urge all those eligible to come forward, roll up their sleeves and get protected as soon as they can.”

Eleanor Riley, a professor of immunology and infectious disease, said Omicron is spreading so fast that people are “very likely” to meet someone infected with the Covid-19 variant unless they are “living the life of a hermit”.

The University of Edinburgh academic also warned “a lot of people” could still end up in hospital even if the coronavirus mutation proves to provoke milder symptoms than the Delta variant.

Prof Riley told BBC Radio 4’s Today programme: “Omicron is spreading so quickly that, I think, unless you are living the life of a hermit, you are very likely to come across it in the next few weeks.

“I don’t think anyone should be going around thinking they are not going to catch it, I think that situation has changed.”
She added: “There is a huge ‘if’ about this, ‘is it milder?’. I think it is very dangerous to compare data from South Africa, say, to the UK.

A hospital ward has been closed to new admissions due to a Covid-19 outbreak, an NHS spokesman said.

NHS Highland said that Ward 7a at Raigmore Hospital, Inverness, is closed to new admissions and visiting following the detection of a small number of cases of Covid-19.

Patients are being clinically assessed and monitored with normal in-patient care continuing.

The NHS spokesman said: “There is no evidence of any link between these cases and those in ward 5a, which also remains closed to new admissions and visiting.”

Tests are establishing whether any of the cases are of the Omicron variant and the results are expected next week.

Consultant microbiologist Adam Brown said: “The fact that we have apparently unrelated instances of Covid-19 in two different wards shows how prevalent the virus is in the community at the moment.

“It is more important than ever to keep to guidance about distancing, hand-washing and wearing a face covering.”

National Care Association hoping to get clarity on new restrictions

The chair of the National Care Association has said new rules on care homes have “almost” taken people back to the restrictions that were in place a year ago.

Nadra Ahmed, of the National Association of Care Providers, said she is hoping to get clarity on the new guidance.

“It was something that we’ve been having to plan for and, of course, now we’re looking at three nominated people. That kind of disempowers anybody else and for the residents, they may have been looking forward to it.

Some Treasury staff who worked on the Autumn Spending Review last year had office drinks while England was in lockdown, it has been reported.

It comes after more than a week of controversy over allegations of rule-breaking festivities in Downing Street in the run-up to last Christmas.

The Times reported that around two dozen civil servants were present for the drinks on November 25, 2020.

The newspaper quoted a Treasury spokesman as confirming that a “small number” of staff had “impromptu drinks around their desks”.

The Times said Chancellor Rishi Sunak was not at the event and that it is understood he was not aware of it at the time.

A Treasury spokesman told the paper: “In line with the guidance at the time, a number of staff came into the office to work on the Spending Review 2020.

“We have been made aware that a small number of those staff had impromptu drinks around their desks after the event.”

People being urged to get booster vaccines to counter Omicron

An additional 448 confirmed cases of the Omicron variant were reported across the UK on Friday, bringing the total number to 1,265.

Dr Mary Ramsay, head of immunisation at the UKHSA, said while early data should be treated with caution, it indicates that “a few months after the second jab, there is a greater risk of catching the Omicron variant compared to Delta strain”.

She added: “The data suggest this risk is significantly reduced following a booster vaccine, so I urge everyone to take up their booster when eligible.”

Britain’s top public health officials have advised ministers that “stringent national measures” need to be imposed by 18 December to avoid Covid hospitalisations surpassing last winter’s peak, according to documents leaked to the Guardian.

Sajid Javid, the health secretary, is said to have received a presentation from the UK Health and Security Agency (UKHSA) on Tuesday warning that even if the new Omicron variant leads to less serious disease than Delta, it risks overwhelming the NHS with 5,000 people admitted to hospital a day.

In an interview with the newspaper, the epidemiologist Prof Neil Ferguson said the total could be double that number.

No 10 has insisted there are no imminent plans to bring in more measures after plan B measures were announced for England this week but cabinet minister Michael Gove, who chaired a Cobra meeting on Friday, said the government had been presented with some “very challenging information” about the speed of the spread.

London crime: 4 people stabbed in horrific weekend of violence in the capital