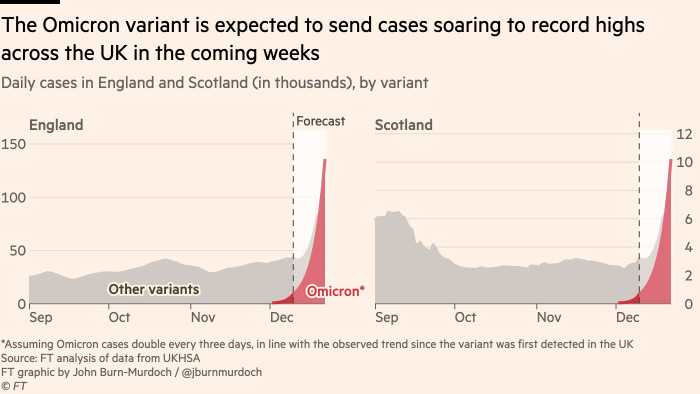 Covid-19 booster shots could be up to 75 per cent effective against symptomatic infection from the Omicron coronavirus variant, according to the first real-world study pitting the jabs against the new strain.

An analysis by the UK Health Security Agency looking at 581 individuals with confirmed Omicron found that two shots of either the Oxford/AstraZeneca or BioNTech/Pfizer vaccines provided “much lower levels” of protection against symptomatic infection than with Delta. But the study also showed that a fortnight after a third dose, protection was between 70 and 75 per cent.

Omicron is also expected to overtake the dominant Delta variant by mid-December, according to the UKHSA. The agency warned that on the basis of the current doubling time of between two and three days, “the UK will exceed one million infections” by the end of the month.

Sajid Javid, UK health and social care secretary, said the new data underlined “how important booster jabs are to protect us against this variant”.

Dr Mary Ramsay, head of immunisation at the UKHSA, said the early estimates “should be treated with caution” but added that they suggested “that a few months after the second jab, there is a greater risk of catching the Omicron variant compared to Delta”.

The report also found that the Omicron variant is transmitted twice as easily between close contacts than the Delta variant, and a preliminary analysis found that people who had previously caught and recovered from Covid-19 are more likely to become reinfected with Omicron than with Delta.

Michael Gove, secretary of state for levelling up, said after chairing a Cobra meeting with the devolved governments’ first ministers that the situation was “very challenging”.

I’d much rather be in our position than a country that has had much lower levels of infection so far.

“We recognise the importance of balancing people’s ability to get on with their lives with the need to protect them against this virus but action is absolutely required,” he said. “As new data comes in we will consider what action we do require to take in the face of that.”

Earlier on Friday, Nicola Sturgeon, Scotland’s first minister, warned of “a potential tsunami of infections” because of Omicron, adding that the worsening trends were “broadly reflected” across the UK.

Scientists and medical leaders said the fast-rising infection rate could quickly lead to unsustainable pressure on the health service. The UK on Friday reported 58,194 new cases, mostly from Delta, its highest daily caseload since January 9.

Tim Spector, professor of genetic epidemiology at King’s College London, predicted the government “will be forced to” resort to extra measures to stem Omicron’s spread if hospital admissions rise. “They’ll have no alternative as there’s no comfort room in the NHS right now,” he said. “They’ll need to reduce the speed of the peak so admissions don’t occur all at once.” Matthew Taylor, chief executive of NHS Confederation, which represents organisations across the healthcare sector, said Omicron might make the “unprecedented challenge” the NHS is already facing “almost impossible to cope with”.

Taylor welcomed the move earlier this week to implement Plan B restrictions, including working from home guidance, but stressed that the government “should keep their minds open about the need for more measures”.

Spector added that even though the UK had “paid the price” for a stubbornly high wave of infections over the summer and autumn, the extra immunity would help the UK weather the Omicron wave. “I’d much rather be in our position than a country that has had much lower levels of infection so far,” he said. 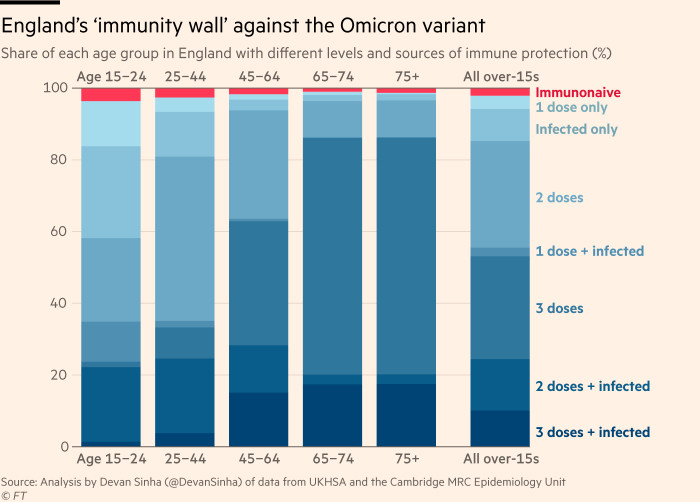 Marc Baguelin, a lecturer in infectious disease modelling at Imperial College London and also a member of the government’s Scientific Pandemic Influenza Group on Modelling, said the best-case scenario would still result in “a surge” of cases and hospital admissions, but that it would “not surpass” the height of the January wave.

However, he added: “The other way around is equally possible and it could be a lot worse. Boosters will be key.”

Nearly 470,000 booster shots were administed across the UK on Friday, bringing the total to more than 22m.