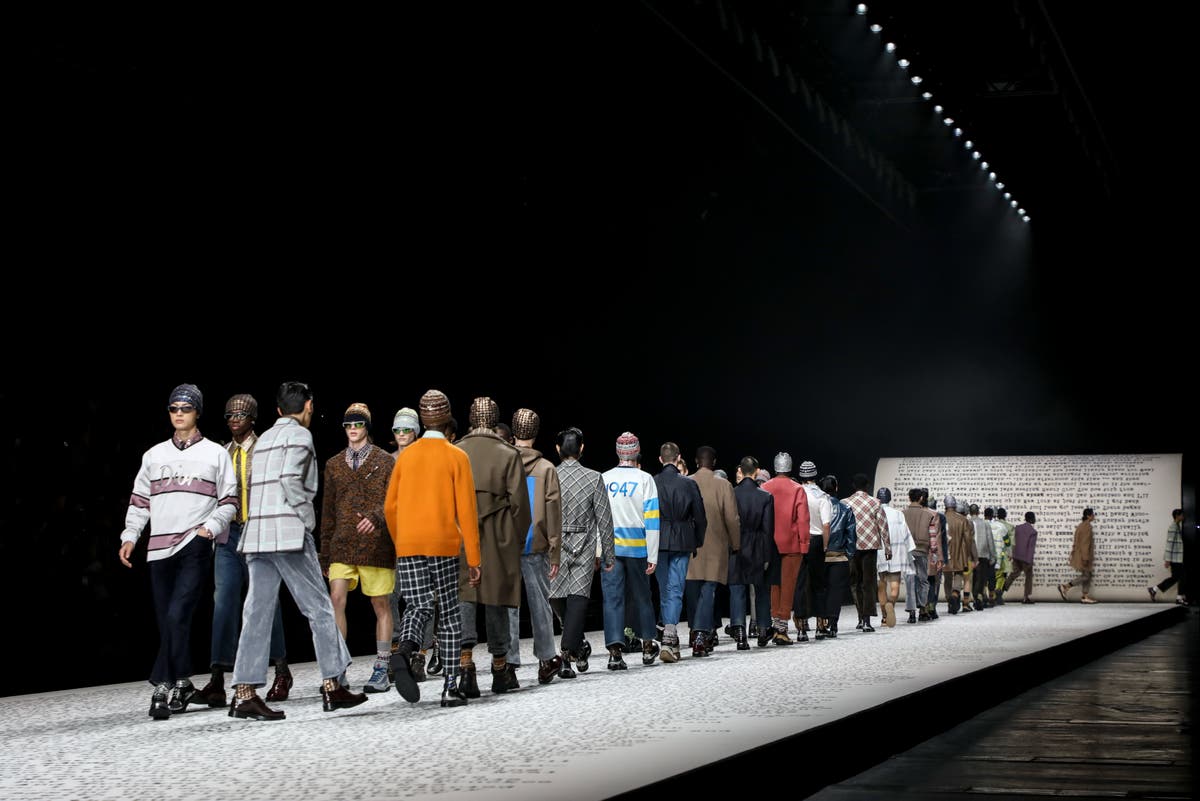 Some special occasions require a red carpet, but tonight Dior Homme artistic director Kim Jones rolled out a giant manuscript in Kensington Olympia to mark Dior’s first runway show in London since the UK left the EU, and its first ever menswear show in the city.

The giant text-covered scroll of a runway was a tribute to the single 120-foot-long roll of paper on which Jack Kerouac famously typed his second novel On the Road, Jones’ inspiration for the SS22 collection.

“It’s exciting to show in a new location, and London’s my hometown,” said Jones in a press preview. “Plus it’s a literary city so it makes sense.”

Published in 1957, the year of Christian Dior’s death, Kerouac’s novel is widely agreed to be the defining work of the Beat Generation. It marked a new era for his métier, just as Dior’s debut ten years earlier had, in turn, for his.

The focus on literature marks a new direction for Jones, whose previous collections have typically featured collaborations with buzzy names in contemporary culture, from artist Peter Doig, to Shawn Stussy and most recently the rapper Travis Scott.

“I think it’s interesting at this point in time, after lockdown, to look at something from a perspective like this,” said 48-year-old Jones, an avid book collector who spent much of lockdown holed up in his huge library at his home in West London. “A lot of young people are looking to read now rather than look at their phones, which I think is a nice positive out of it.”

In a bid to engage the fashion crowd in his passion for antiquarian books, Jones curated a pre-show exhibition of rare books with the help of Sammy Jay, Literary Specialist at London-based rare book dealers Peter Harrington, the largest antiquarian book dealer in Europe.

Jay and Jones have worked together for several years now to source unusual tomes both for his impressive personal library (which features over 100 Kerouac first editions, 60 of which he loaned to the exhibition) and also for Jones’ couture debut for Fendi back in January, which featured an edit of manuscripts and books from the Blooomsbury Group.

“The Beat poets shifted the way of thinking… and young people are still reading Kerouac now,” says Jones. ”It was a real youth movement and that’s what’s interesting when you’re looking at Dior. He was always very much thinking about youth when he was working so I wanted to make it more youthful and play with it a bit.”

And certainly the collection itself was a playful mishmash of styles and eras. Nods to a beatnik uniform came via slacks, shiny brown patent brogues and boxy jackets worn with hair slicked at the side with a quiff. Work wear sat alongside hiking kit and sequins (the contents of a rucksack filled in a hurry perhaps) and looks were thrown together as if the first items retrieved from a backpack: A checked tweed coat paired with a sequinned shirt, sporty trunks, sequin socks and silver shoes. “There’s a lot going on,” admits Jones. “It’s how it would be on the road; packing and unpacking and mixing it up.”

“I wanted to mix and match things from different periods of the archive from round the time when they [Dior and Kerouac] were both creating,” said Jones, who embossed an archival CD diamond pattern from the early 60s on cloqué fabric, and reworked original foulard silks from the period into scarves, ponchos and ties. Vintage wash denim, the ultimate symbol of 1950s Americana, underpinned several looks – a runway first for Jones. “I always prefer not to show denim,” said the London-born designer. He’d ordinarily rather “scale things up…But when you add a silver shoe and a sequin sock it works.”

Perhaps fittingly for his return to London, where fashion is famously expressive and eccentric, Kim Jones delivered a Dior Homme vision that delights in the unexpected and offers a little something for everyone. A varied and versatile wardrobe, for wherever the road might take you.