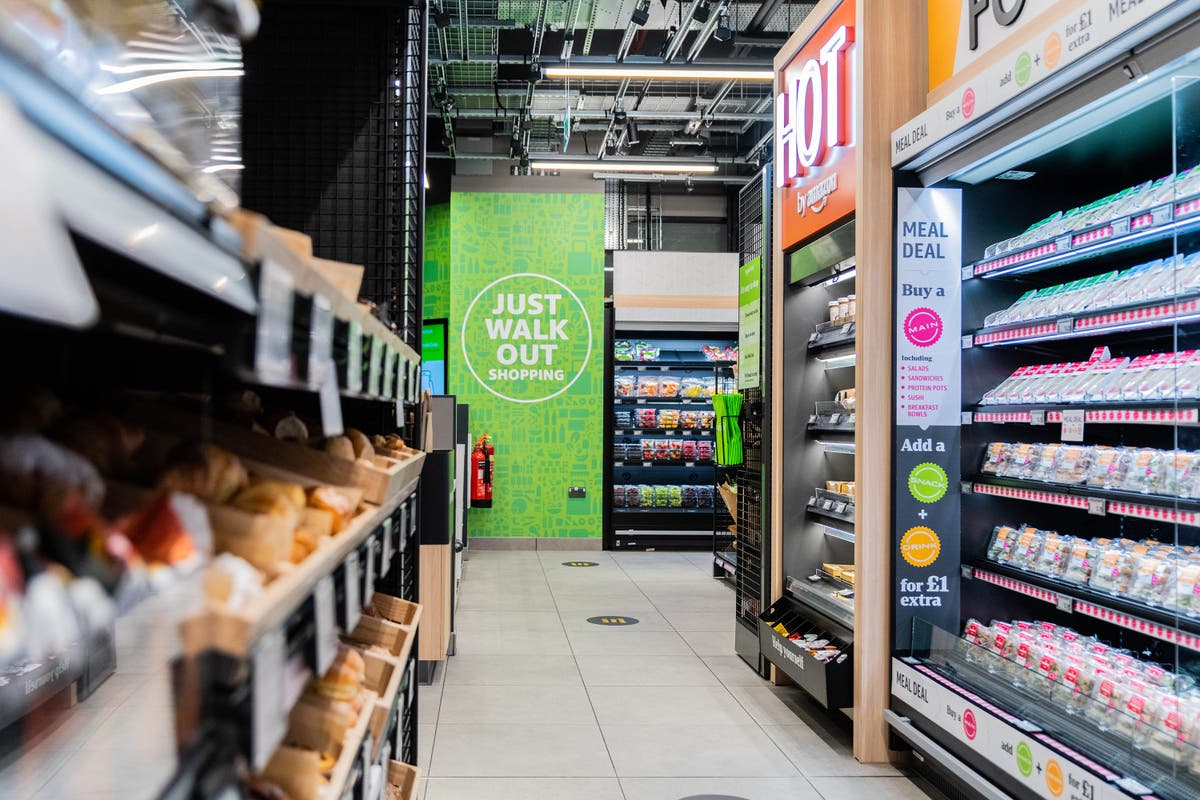 The new arrivals come hot on the heels of openings in Richmond and Islington and take the number of outlets featuring its patented ‘Just Walk Out’ technology to have launched in London since March to 12.

The west London branch is on the ground floor of a newly built block of apartments by Hounslow’s bus garage in gritty London Road.

The new City outlet is opposite a traditional gin house near Aldgate East in Leman Street. (Scroll down for the full list and a map)

Both feature a mix of household brands and ‘by Amazon’ own-brand food products, which customers tracked by camera simply pluck from the shelves, bag and leave.

The cost is debited automatically and a receipt appears by email an hour or two later.

Amazon says the system uses similar technologies to self-driving cars. Computer vision, sensor fusion and deep learning detect when products are taken from or returned to the shelves and keep track of them in a virtual basket.

‘If Just Walk Out is the carrot, Amazon Go is perhaps the stick’

The company, which has a market valuation of around $1.7 trillion, has not set a figure for the number of shops it ultimately intends to open.

A report last month suggested it could be aiming for 200 branches across the UK within the next two years as part of a global empire of 3000.

But analysts suggest a more lucrative potential may lie in licensing the software to existing supermarkets with established supply chains.

Starbucks opened a cafe in New York using the tech last month, while duty-free chain Dufry is trialling the software at Chicago and Dallas airports.

It put the software on sale in March 2020, but take-up has so far been limited.

Alex Webb, analyst for Bloomberg, suggested Amazon’s rapidly proliferating portfolio of retail stores may be as much a nudge to rival supermarkets as lure to tech-hungry millennial shoppers.

He said: “A strategy is gradually emerging that could make Jeff Bezos & Co a deluge of profit from the concept without opening a single store more. That’s because selling groceries isn’t a great business these days. Selling software, however, often is.

“If Just Walk Out is the carrot, then the competitive threat of Amazon Go is perhaps the stick.”

Michael Waters, of Modern Retail, likens Just Walk Out to Amazon Web Services, the backbone of the online cloud that underpins global ecommerce and accounts for around two-thirds of Amazon’s $20 billion annual profits.

“Like AWS, it’s a new service-oriented technology, which the company first perfected on its own systems before selling as a service to other major corporations ,” he wrote.