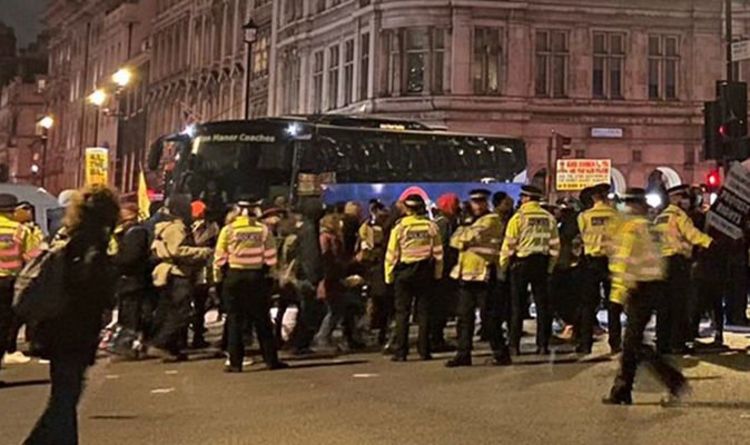 Hundreds of demonstrators have gathered at Parliament Square in Westminster, with police at the scene. Some protesters can be seen with “kill the bill” banners to show opposition to a new Police, Crime, Sentencing and Courts bill.

The legislation, which gives police increased powers to curb demonstrations, is being scrutinised in the House of Lords today.

One group is pictured wearing orange prison costumes with a black hood over their heads.

Meanwhile, others are believed to be voicing their anger against climate policy and the tightening of coronavirus rules which were announced by Boris Johnson this evening.

One Twitter user with the handle @TheHoogie tweeted a video of the crowds near the House of Commons.

Separate footage shared on social media shows scuffles breaking out between the police and protesters.

In the clashes, officers are seen pushing some members of the crowd as they are ushered to move on.

Chants of “who do you protect?” and “who do you serve?” can be heard directed at the force.

@BecksRixon tweeted: “Situation in Parliament Square is getting a bit heated.”

It includes plans to give police in England and Wales more powers to impose conditions on non-violent protests judged to be too noisy and thereby causing “intimidation or harassment” or “serious unease, alarm or distress” to the public.

Time and noise limits could be imposed as a result of provisions in the Bill and those convicted of breaching conditions could face a fine or jail.

It was drafted partly in response to previous disruptive action by environmental activists Extinction Rebellion and more recently Insulate Britain.

At a 6pm Downing Street press conference, the Prime Minister confirmed the UK would be moving onto Plan B to tackle the new Omicron variant.

Covid passports will be mandatory in large venues, work-from-home guidance has been reintroduced and mask rules will be extended to public venues including cinemas, theatres and places of worship from Friday.