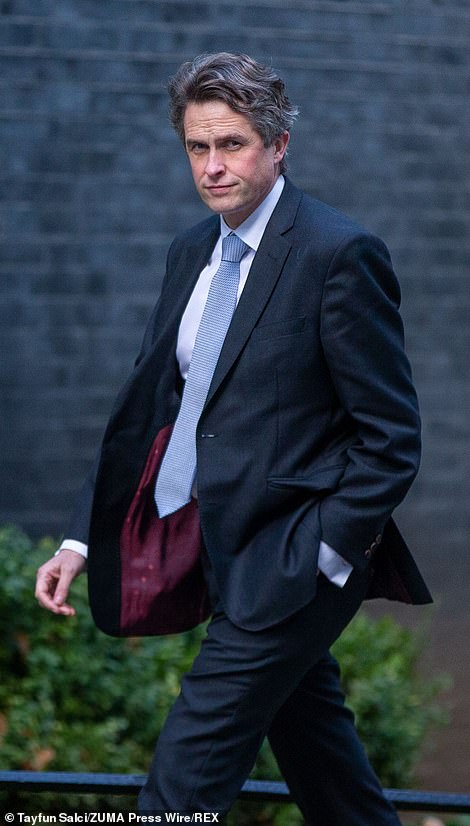 Gavin Williamson ‘hosted lockdown-breaking Christmas bash’: Ex-minister ‘welcomed up to two dozen staff for drinks and canapés at Department for Education on Dec 10 – as nation rages over claims of Downing Street party

By Mark Duell for MailOnline

Gavin Williamson was today accused of holding a Christmas party for ‘up to two dozen people’ within the Department for Education at their offices in contravention of Covid-19 social distancing rules at the time.

The then education secretary allegedly threw a party and delivered a short speech at the event on December 10 last year, which took place while London was in Tier 2 – banning any indoor social mixing between households.

Amid claims in the Daily Mirror that the event featured drinks and canapés, Government officials said the party involved staff who were ‘already present at the office and who had worked together throughout the pandemic’.

Mr Williamson is said to have spoken at the evening event before ministers ‘mingled’ and drank back wine. One source described it as ‘reckless’, and the DfE has admitted that the social gathering took place.

Officials also said the gathering was ‘used to thank those staff for their efforts during the pandemic’, although they ‘accept it would have been better not to have gathered in this way at that particular time’.

A source said: ‘There were lots of people gathered in the cafe area, mingling and drinking wine.’ Another added: ‘He hosted a drinks do when people were considering whether they could spend Christmas with their families.’

It came as Downing Street was in crisis this morning after a video emerged of officials joking on December 22 last year about another lockdown-busting party days earlier on December 18 which they insist never happened. 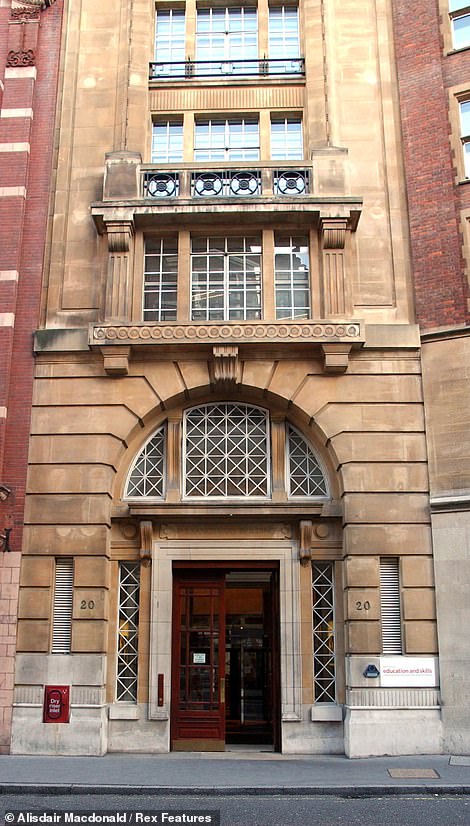 Former education secretary Gavin Williamson (left) is pictured outside Downing Street on November 25 this year. He allegedly held a Department for Education Christmas party at their offices in the Sanctuary Buildings in London (right)

A DfE spokesman told MailOnline: ‘On December 10, 2020 a gathering of colleagues who were already present at the office – and who had worked together throughout the pandemic, as they couldn’t work from home – took place in the DfE office building in London at a time when the city was subject to Tier 2 restrictions.

‘The gathering was used to thank those staff for their efforts during the pandemic. Drinks and snacks were brought by those attending and no outside guests or supporting staff were invited or present.

‘While this was work-related, looking back we accept it would have been better not to have gathered in this way at that particular time.’

The video of the second party on December 22 shows Boris Johnson’s former press secretary Allegra Stratton giggling and laughing as she is asked about the event during a mock media conference.

The footage was filmed last December 22 – four days after the alleged ‘boozy’ party and when London was under strict Tier 3 coronavirus curbs. 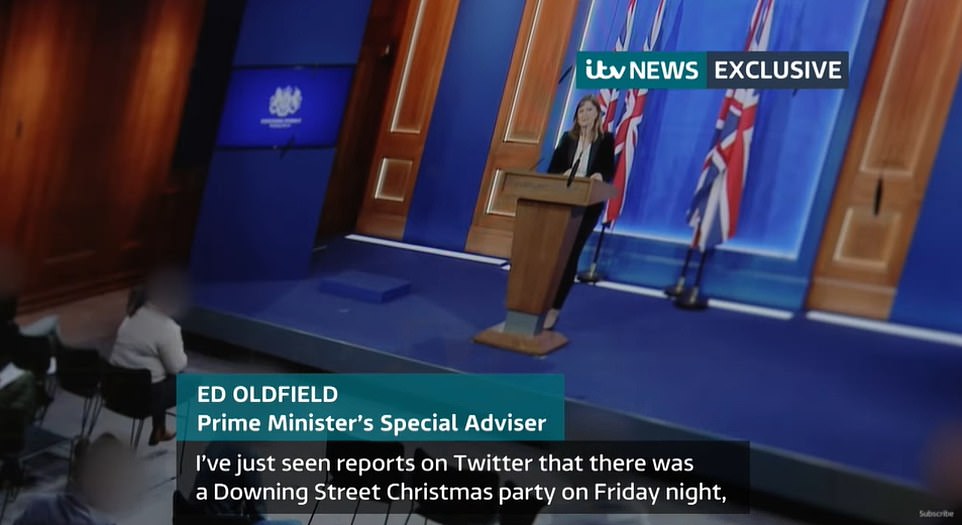 Separately, a video emerged of No 10 officials joking about another lockdown-busting party. It shows Boris Johnson’s former press secretary Allegra Stratton giggling and laughing as she is asked about the event during a mock media conference

The revelation follows a week of tortured denials from No 10 over allegations that staff exchanged ‘secret Santa’ gifts and partied past midnight.

The damning clip, which was leaked to ITV News, shows Miss Stratton and aides joking about cheese and wine and suggesting the ‘fictional’ event was ‘not socially distanced’.

Miss Stratton, who is still on the No 10 payroll earning £125,000 a year, was practising for planned TV media briefings, which were later axed.

At the time of the alleged event, on December 18, Christmas parties were outlawed – on pain of £10,000 fines – and many families were even barred from visiting dying loved ones. Mixing indoors with people from other households was banned in the capital.

Downing Street was still insisting last night that there had been ‘no Christmas party’ and that coronavirus rules were followed at all times. But ministers were aghast at the crass video, with one privately describing it as ‘appalling’. 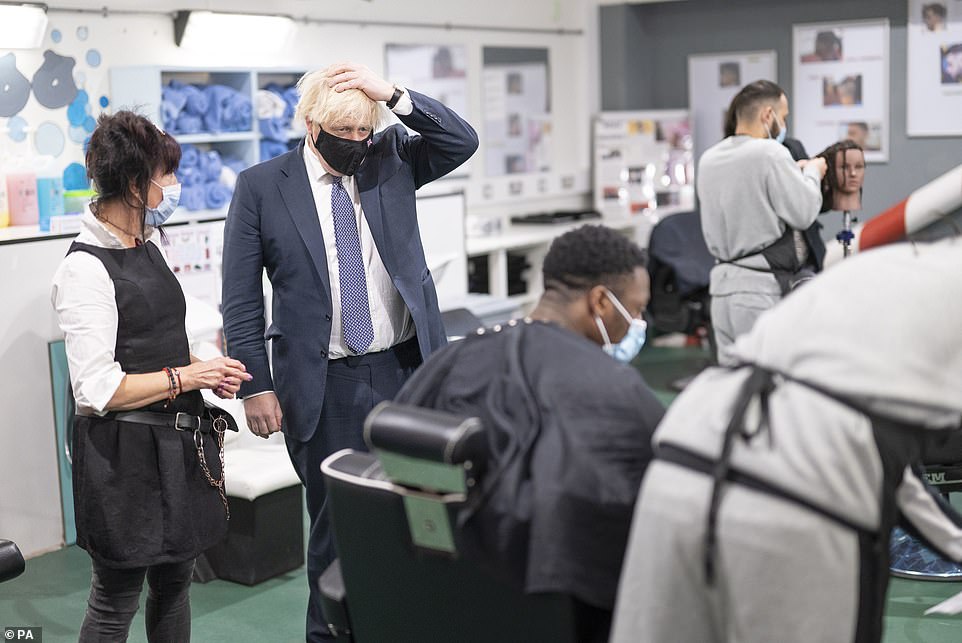 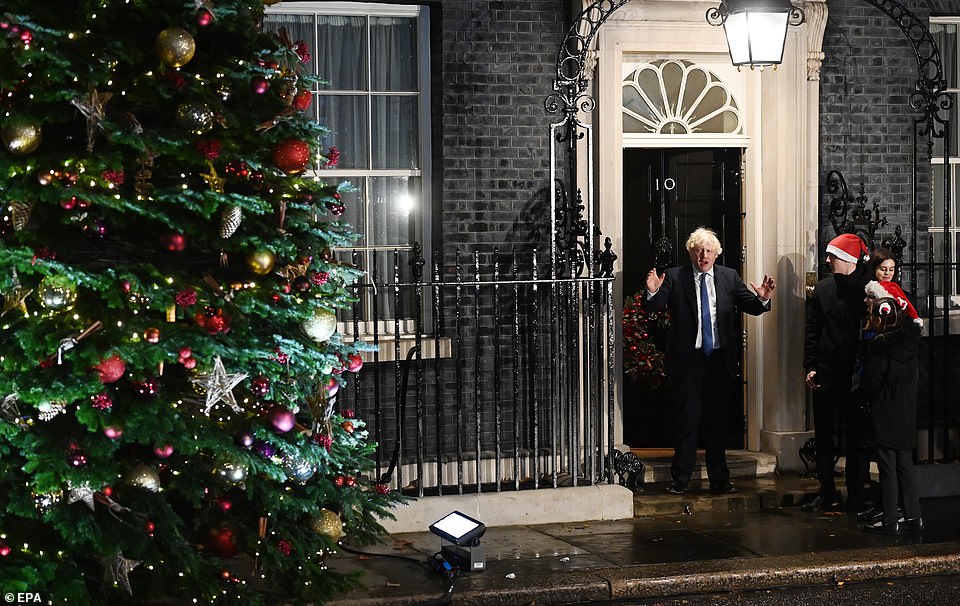 Insiders fear the release of the toxic footage could unleash a wave of public anger, similar to the fury over the trip to Barnard Castle by Dominic Cummings at the height of the first lockdown.

A Downing Street insider acknowledged the video was a ‘disaster’, adding: ‘No 10 aides laugh at their party as thousands cry for their dead.’

Becky Kummer, of Covid-19 Bereaved Families for Justice, said: ‘There are simply no words to describe how upsetting and shameful it is to hear Boris Johnson’s team laughing about breaking the rules they had made, while others followed them and could only say goodbye to their loved ones through a screen. It’s the behaviour of people who think they’re above us.’

Scotland Yard said it was aware of the new footage. It is understood that a senior officer looking at the matter will now consider the contents of the video in the coming days. No investigation has been launched.

Police hunt man, 38, who is ‘a risk to young children’ and known for committing offences on London Underground