Britain is bringing in travel restrictions for six African countries due to a new COVID variant that UK experts have called the “worst one we’ve seen so far”.

“Six African countries will be added to the red list, flights will be temporarily banned, and UK travellers must quarantine.”

Flights from South Africa, Namibia, Lesotho, Botswana, Eswatini and Zimbabwe will be suspended from 12pm today until 4am on Sunday.

From Sunday onwards, new arrivals in the UK will be required to quarantine in hotels.

Mr Javid said the new B.1.1.529 variant identified in South Africa “may be more transmissible” than the Delta strain – and warned “the vaccines that we currently have may be less effective”.

The UKHSA says it is the “worst one we’ve seen so far” and has a spike protein that is “dramatically” different to the original COVID strain.

The variant also has 30 mutations – twice as many as the Delta variant – and these mutations are likely to evade the immune response generated by prior infection and vaccination.

‘Our scientists are deeply concerned’: Javid

Scotland and Northern Ireland have said they are also introducing the new rules.

No cases of this variant have been reported so far in the UK, and anyone who has travelled from one of these countries in the past 10 days is now being invited to come forward for a test.

About 500 to 700 people are travelling to the UK from South Africa each day at the moment, but it is expected this figure could increase in the run up to Christmas.

According to aviation analyst Alex Macheras, Virgin Atlantic had reported taking more than 32,000 bookings for South Africa in October alone – and most of them for the rest of 2021. 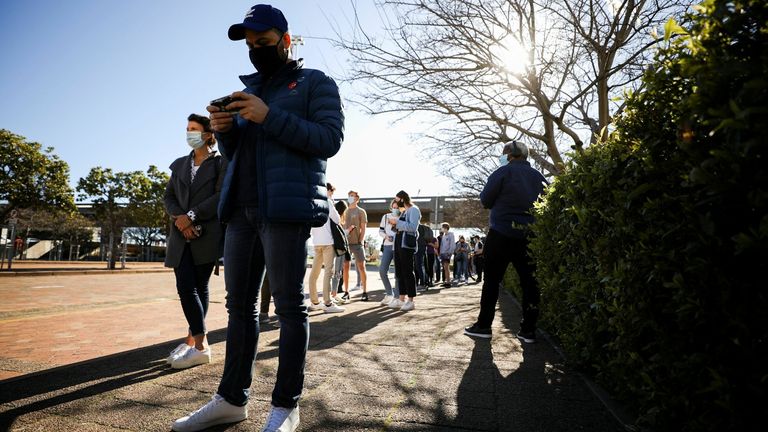 Image:
South Africa is currently getting deliveries of vaccines faster than they can be used

Spike proteins are what viruses use to get into human cells, and some vaccines work by training the body to recognise the spikes and neutralise them.

Mutations on the spike could therefore potentially prove problematic.

But with only a handful of recorded cases – three in Botswana, around 53 in South Africa and one in Hong Kong from someone who had travelled from South Africa – scientists are hopeful it can be contained.

Francois Balloux, professor of computational systems biology at University College London, said it should be closely monitored but “there is no reason to get overly concerned, unless it starts going up in frequency in the near future”. 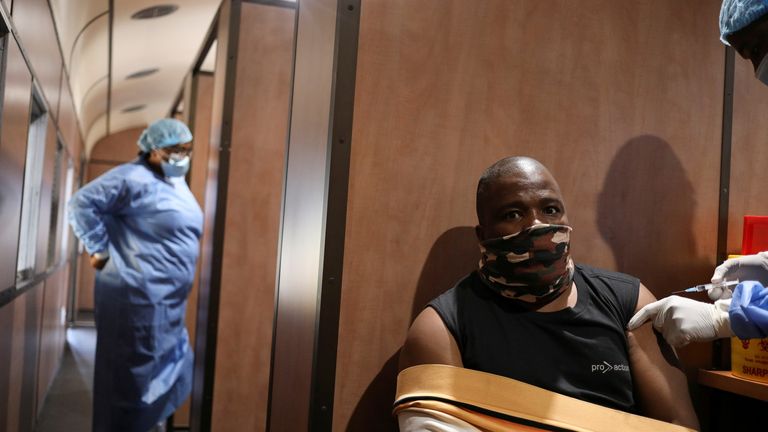 Image:
Over the summer, trains were turned into vaccination centres so South Africa could reach adults in remote communities

In South Africa, health minister Joe Phaahla has said “there has been more of an exponential rise” in cases “over the last four or five days”.

Until recently, the country had been reporting about 200 confirmed cases per day – but this has rapidly increased over the past week, hitting 2,465 on Thursday.

Scientists from seven South African universities are now studying the variant, and are trying to determine how many of these new cases are linked to it.

Ravindra Gupta, professor of clinical microbiology at the University of Cambridge, has warned “there is a high probability” that many of the new cases in South Africa may be linked to the new variant, but scientists are still unclear whether this is the case.

Just 41% of South African adults have been vaccinated and 130,000 jabs are being administered per day – well below the target of 300,000 set by the government.

The country is currently getting deliveries of vaccines faster than they can be used, meaning that officials have been deferring deliveries so they don’t “accumulate and stockpile” vaccines.

World Health Organisation experts are meeting today to assess the variant, which on Wednesday was classed a variant under monitoring.

If it is upgraded to a variant of concern, it could be given a name from the Greek alphabet – and would likely be referred to as Nu.

However, it could also be classed as a less serious variant of interest, indicating it has characteristics that may affect factors such as transmissibility and disease severity.

It could take weeks to generate all the information needed about this variant’s characteristics.

To date, the Delta variant remains by far the most infectious – and it now accounts for more than 99% of the sequences submitted by countries worldwide.