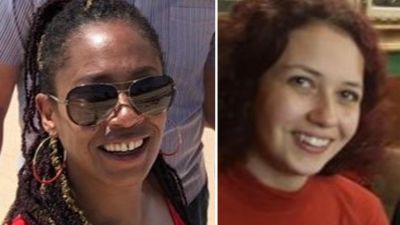 “Myself, my husband, my family… we’ve been to hell and back again…” said mum of murdered sisters Nicole Smallman and Bibaa Henry

Two Met Police officers who took pictures of murdered sisters Bibaa Henry and Nicole Smallman in a park in north London have each been jailed for two years and nine months.

PC Deniz Jaffer and PC Jamie Lewis were sent to Fryent Country Park in Wembley to secure the crime scene after the bodies of Bibaa Henry, 46, and Nicole Smallman, 27, were found in bushes.

An investigation found they breached the cordon and took “inappropriate” and “unauthorised” photos which were shared on WhatsApp.

On Monday, the pair appeared at the Old Bailey to be sentenced by Judge Mark Lucraft QC.

In victim impact statements, family members described the defendants as a “disgrace” to the police family and to mankind.

The women’s mother, Mina Smallman, said the officers’ actions were a “betrayal of catastrophic proportions” and a “sacrilegious act”.

Finding out that the men took selfies “for their own amusement” had left the family “horrified”, she said.

Mina Smallman, the mother of Nicole Smallman and Bibaa Henry speaks outside the Old Bailey

Mrs Smallman added: “Those police officers felt so safe, so untouchable, they felt they would take photos of our murdered daughters. Those officers dehumanised our children.

“If it had not been for an anonymous tip-off to the IOPC (Independent Office for Police Conduct) we would never have known.”

She added that the actions of the officers amounted to “pure misogyny”.

PC Jamie Lewis was also found to have superimposed his face onto a picture with the victims in the background.

He sent the image to PC Deniz Jaffer who then sent it onto a another officer at the scene.

Jaffer went on to show one of the photos to a male officer as they left the park and sent others to three friends on WhatsApp.

Lewis, who used “degrading and sexist” language, also shared crime scene pictures with a WhatsApp group of 40-plus officers called the “A Team”.

The pair, who were attached to the Met’s North East command unit, were suspended from duty following their arrests on June 22 last year.

Jaffer, 47, of Hornchurch, east London, and Lewis, 33, from Colchester, Essex, pleaded guilty to misconduct in a public office.

The judge condemned their “appalling and inexplicable conduct”.

Judge Lucraft said: “The public expects, and rightly so, the highest of standards from police officers.

“I am sure there will be many thousands of officers in police forces in this country and abroad utterly horrified by your actions.

“It is appalling and inexplicable conduct.

“Here, the two of you not only violated the police cordon with the effect that had on the scene and on the investigation, but then wholly disregarded the privacy of the two victims of horrific violence and their families for what can only have been some cheap thrill, kudos, a kick or some form of bragging right by taking images and then passing them to others.”

Previously, the sisters’ mother Mina Smallman called on the Metropolitan Police to “get the rot out once and for all”.

Lewis was dismissed from the Metropolitan Police immediately and Jaffer would have been sacked too, had he not already quit the force.

In October, teenager Danyal Hussein was jailed for life for the double murders and will spend at least 35 years locked up.

At the time of sentencing, Hussein’s lawyer, Riel Karmy-Jones, said he was “little more than a child with significant issues” at the time of the killings.

She said there remained many unanswered questions, adding: “We hope in time and after some treatment the family will get some answers as to how and why these offences came to happen”.

The lawyer added: “He has got a loving family who are devastated by what has happened.”

During Hussein’s trail the Old Bailey heard he had embarked on a “campaign of vengeance” against random women in a failed bid to win the Mega Millions Super Jackpot lottery prize of £321 million.

Police tracked him down through DNA and uncovered a handwritten pledge to a demonic entity called King Lucifuge Rofocale to kill six women every six months, which was signed in blood.

Hussein declined to give evidence in his trial and was found guilty two counts of murder and possession of a knife.