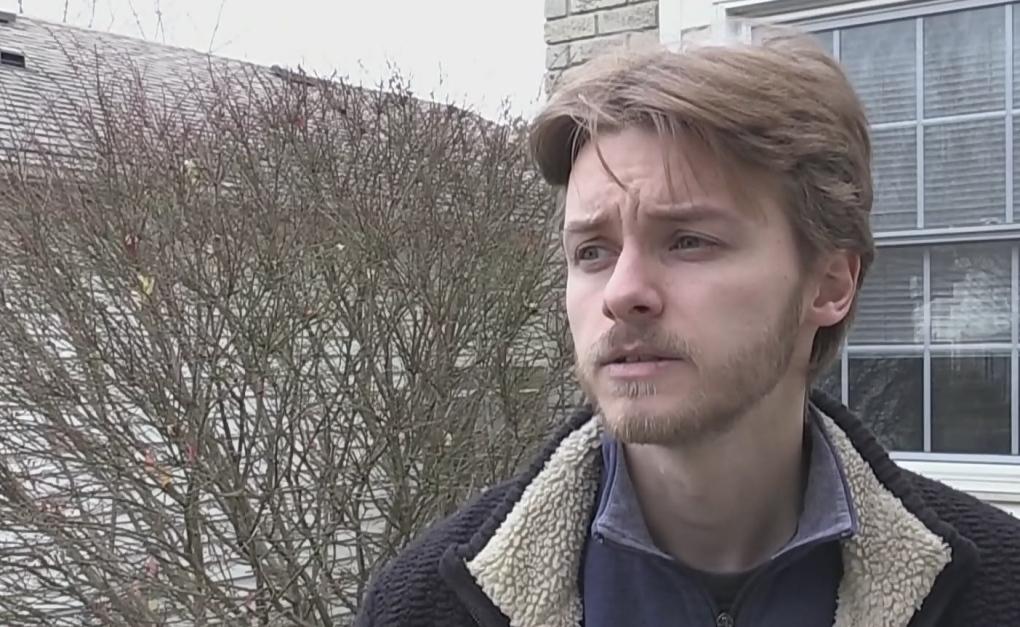 One time the student is placed in handcuffs and walked out. The other time he is lifted out, held by his hands and feet.

Now Harry Wade, 22, says he received notification on Wednesday that he’s being expelled from the university, “They’re going to set a precedent for other universities and other institutions and we’ll see the fallout from that in coming weeks.”

Wade says the process leading to his expulsion transpired over a number of weeks.

“I received a trespass notice in early October. I was still attending class and able to complete my assignments and my daily requirements. Then, on Oct. 28, they revoked my student access.”

Wade says that meant he could no longer complete assignments, view course content or view his grades.

“So the only thing left for me to do, as a student who paid tuition to be on campus, was to ask students if they thought this was acceptable. To do that I posed the question to the class by having them forcibly remove me from it.”

Western was one of the first post-secondary institutions in the country to introduce a comprehensive vaccine mandate. They were also one of the first to bring back almost full in-class learning.

On Friday, Western’s communications department issued this statement in response to our inquiries about Wade’s circumstance:

“While we can’t speak to individual cases due to privacy legislation, we can say that individuals who violate Western’s vaccination policy may be removed from campus, and may face other discipline. The university takes an incremental approach to responding to individuals who are non-compliant.

“The safety of our community is our utmost priority. Individuals deemed to be non-compliant with Western’s vaccination policy were given ample opportunity to provide proof of vaccination to the university including multiple phone calls, emails, text messages and warnings.

“To date, 28 students (of a total of about 37,000) have been placed on involuntary leave due to non-compliance with Western’s vaccination policy. These individuals have also received a notice of trespass to campus. We’ve dealt with one individual regarding non-compliance requiring on-campus intervention.”

“At first I thought it was kind of harsh,” says student Alex Voralek, “After hearing that he did it four or five times there, I don’t really know what their options are there. They have to enforce whatever their rules are.”

Voralek is also studying engineering at the university and wonders if other options should be available, “These people should still have the right to attend classes, maybe not in person, but I think there should be an online format for such students.”

“I honestly really appreciate the steps that Western’s taking,” says second-year student Allison Gocan. She says her friend was in the same class as Wade. “I think it makes the profs feel safer, and everyone else. And I know it’s a concern for a lot of people, health-wise, so I like that we’re taking all the measures we can to stay safe.”

International student Farhath Syed came from Saudi Arabia and is in her first year studying engineering. She says vaccine passports are common, and expected, in her home country and she says students at Western were warned about the policy.

“One of the first days all the teachers told us, ‘If you’d do not get vaccinated you will be expelled.’” Syed says she still gets unnerved being in class, “It’s very scary. When I saw people going so close. When we sit next to each other in class I say, ‘Is this OK?’”

“The vast majority of students have provided the University Students’ Council with positive feedback about Western University’s vaccination policy. A motion to endorse the vaccine mandate was passed by our Council at the August meeting and, as a result, our student community has articulated that a vaccine mandate is the best way to protect our campus community in the face of the ongoing pandemic. If students have concerns about the policy and/or its implementation, we encourage them to reach out to us to elevate those concerns with decision makers at the university.”

Wade says it’s a matter of individual rights,”I don’t see the mandate as something that is a requirement of citizens, and that I am violating the mandates. I feel like the mandates are violating our civil liberties.”

Wade says he was told that he has five years to appeal his expulsion, but hasn’t decided what his next steps will be.