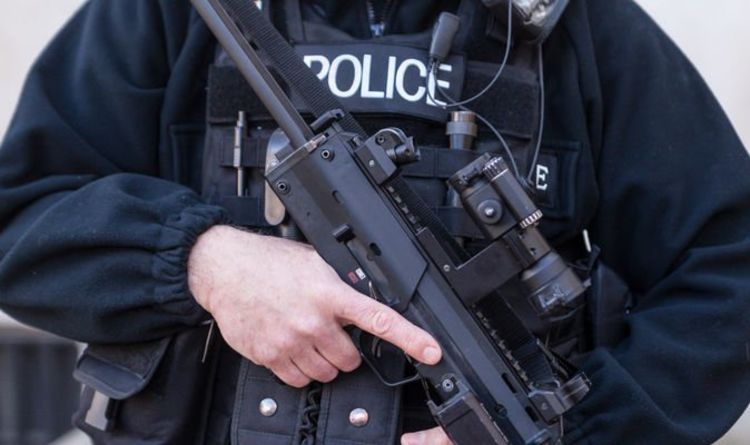 The city’s terror threat erupted following the arrests of two men by the Met’s Counter Terrorism Command. The men were arrested and detained on Tuesday morning under Section 41 of the Terrorism Act 2000.

The men remain in custody and searches of the addresses in west London are ongoing.

Commander Richard Smith of the Met’s Counter Terrorism Command said: “Based on enquiries by detectives so far, there was not believed to be any immediate threat posed to the public, and those arrested remain in custody.

“We are all aware that the UK National Threat Level has been raised from substantial to severe following events in Merseyside and we need to work together to defeat terrorism.”

The arrests are not linked to the incident outside of Liverpool Women’s Hospital on Sunday, according to the Met.

The Met has reiterated its plea for members of the public to come forward with information on this or any other case that could help with its mission to uphold the law.

Commander Smith said: “The public as always, are our eyes and ears and nothing should stop you from reporting suspicions to the police.

“Every day, teams within the Met and across Counter Terrorism Policing nationally proactively investigate, identify and target those we suspect of being involved in terrorism.

The 32-year-old was a refugee from Syria, according to the BBC.

He was a passenger in a taxi before his device blew up.

The driver, David Perry, managed to escape before the car set fire.

He has since been dispatched from hospital.

Al Swealmeen is not believed to have been previously known to MI5.

Assistant Chief Constable Russ Jackson, quoted in the BBC, said on Monday: “It is likely to be some time, perhaps many weeks, until we are confident on our understanding of what has taken place.”

He added that “considerable resources and staff [have been] deployed to understand how this device was built and who, if anyone, else was involved”.

Following this event, Home Secretary Priti Patel announced that the terror threat level had been raised from “substantial” to “severe”, meaning an attack is highly likely.

Aldi’s urgent warning to anyone who eats its chocolate