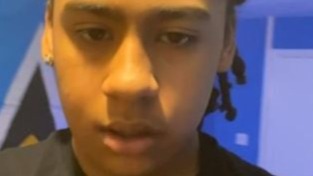 The devastated parents of a teenage boy stabbed to death in South London remembered their son as an “angel” and called for harsher penalties to take knives off the streets.

Jermaine Cools was repeatedly stabbed close to West Croydon station on Thursday. He managed to get to a hospital where he later died.

“He was a family boy… friends and family they’re going to miss him and the way he was, like an angel, a happy boy,” Jermaine’s dad told ITV News London reporter Ria Chatterjee.

Julius Cools also called for more stop-and-search to control the number of knives being carried on Britain’s streets.

“This is ridiculous, it doesn’t matter who you are you should be stopped and searched. How can they have these knives and walk around killing people?” Julius said.

“A lot of these murders and a lot of these young men that lose their life become a statistic on a piece of paper,” said Jermaine’s mum.

“Within 24 hours of what happened to Jermaine he was published as a victim of knife crime.

“So sadly a lot of these crimes that’s what happens, they become a statistic, a number on a piece of paper and nothing changes,” Lorraine Dudek added.

Jermaine’s family said no one stopped to help Jermaine “probably out of fear”.

“That’s got to change. So many people are going to lose their children if something doesn’t happen,” his family said, as they called for harsher penalties to tackle violent crime.

“Parents need to work with their kids. Where are these knives coming from?” Lorraine Dudek said.

Police are appealing for anyone who saw the attack on Thursday evening to get in touch.