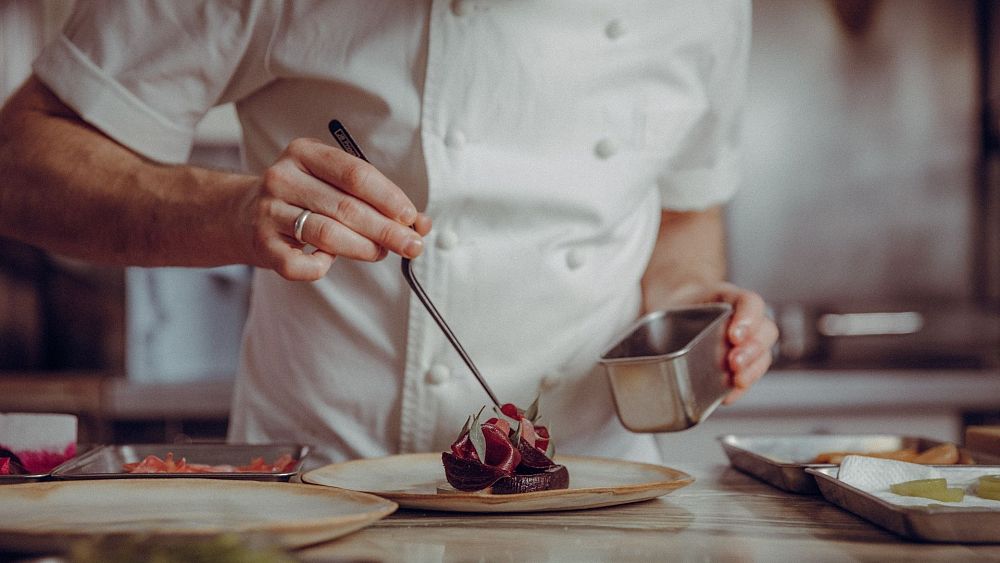 The Sloane Club is private, members-only London institution next door reaching its centenary in 2022.

Its accompanying restaurant and boutique hotel, Sloane Place, is less than a year old, and regarded as much more of a hidden gem.

Open to all, its plush blue and orange interiors sit two minutes away from West London’s finest dining and shopping destinations. A relatively small eatery, it seats about 50.

This week, they’ve got Lee Westcott on board. A true British talent, Westcott has worked at Noma – currently voted the world’s best restaurant – and starred in the BBC’s Great British Menu.

He spent his formative years training under Tom Aikens at his two Michelin-starred eponymous restaurant in the same part of town, Chelsea.

Euronews Culture was invited to indulge in an artful assortment of six tasting plates, featuring old favourites and new inspirations the man has spent months developing for this four-night residency.

Join us as we head to Sloane Place to make sense of frozen mousses, Marmite butter, smoked eel, and more.

A glass of crisp, clear Gusbourne Twenty Sixteen Brut Reserve (which comes with the menu whether you opt for a wine pairing or not – naturally, we did) kicks things off perfectly.

Referred to very humbly by our waitress as a ‘snack’, our first course came in the form of a fragrant, delicate crab tart that Westcott recommends is consumed in just one bite. And what a bite it was.

Two tarts are served on a dish piled high with decorative, pillowy seeds, there was something quite regal about the manner in which it was delivered. Like Tom and Greg feasting on gamey songbirds in that Succession episode, but less guilt. Or not quite like that at all. I digress.

I am fascinated by the mechanics of how a tasting menu is constructed. This tiny tartlet was a light sea breeze and a thick, velvety sampling of what was to come, all in one go.

Did Westcott start us off on this note because he knew this single bite would burst open the gates of our expectations for the evening? Quite possibly.

My dinner companion – whose tastes in food, be it frozen pizza or gourmet sushi, I trust like no other – said she would have eaten the whole thing had it been quiche-sized. We both acknowledged this defeated the point of the opening course, but I’ll be dreaming about the scaling up of these tartlets for quite some time.

Who doesn’t love bread and butter? A staple will never be an unwelcome guest on any dinner menu, regardless of cuisine.

Former visitors to The Typing Room (Westcott’s former east London establishment, which closed earlier this year) will be pleased to see this fan favourite in circulation once more.

On a fresh, buoyant bed of seeds, we are served one of the most aesthetically pleasing crusty buns, impressive in both design and stature – the thing was huge. Without the proportion controls of the accompanying imagery above, you’d be forgiven for thinking we’d been served an entire boule.

It’s a marriage of style and substance. The roll’s cracker-like crust is warm and, the interior is well aerated and inviting. The butter? Whipped, fluffy, foamy, coated in a crumb-like layer of roasted yeast to top it all off. Carbs carved by Gods, slathered in melted dark, deep saltiness.

This was a clear standout. Will I try to recreate it at home? Absolutely. Will it not quite land the way I’d imagined, resulting in the rupturing of a slice of supermarket sourdough with Marmite and Clover? You better believe it.

Westcott is no stranger to working with apples – it’s sort of his signature ingredient. Visitors to any of his past eateries will be familiar with hand-dived scallops and apple tapioca, green apple jelly, discs of green apple and tarragon granita.

The apple in this particular dish sits alongside a lightly charred wedge of smoked eel. Translucent, tart flowers of the fruit, balancing the intense flavours of the fish.

Smoking meats, fish, or even alcohol, can make for a suffocating, overwhelming taste – I’ve had one too many encounters where the chef has been a little too fond of the method, so smoked mains are never usually my first choice.

Here, we have no choice. He makes the rules, and thankfully this was a tasty, memorable introduction to eel as a firmer, more flavoursome alternative to the likes of octopus or squid.

A reduced cucumber joins the party in a virtually unrecognisable transformation. I’m not interested in the culinary world’s bone-dry opinions of celeriac pureé – you may have seen it used on Masterchef one too many times, it worked perfectly here. The richness of the other ingredients demanded it. Soothingly autumnal. Our waiter remarks that this is his favourite of the six, and I almost agree.

Beetroot can be a very hit and miss main character for any dish. When presented warm with the wrong accompaniments, it can all get a bit Bushtucker trial-like very quickly, muddling through chunks of the purple stuff, unsure of what you’re supposed to be feeling.

This menu has not been made with vegetarians in mind, and that’s okay. It was never marketed as such. Westcott has done something – I’m not sure what – to evoke the earthiness of meat in these wedges.

My initial thoughts matched those of my companion – we didn’t love it, but could appreciate what was happening. The smoked cream could have benefitted from being thicker, the helpings of endive could have been more generous. Small citrusy, pulpy flowers made it a pretty but overpowering plate.

Although, with the three courses that proceeded it being so delicious, it’s just pedantry at this stage.

Sloane’s wine pairing on this one was what, retrospectively, saved it – a 2019 Beaujolais, perfectly timed to celebrate France’s national day of the drink. Sips of this sharp, fruity (and not nouveau) red made each beetroot bite make a little more sense.

On the flipside of the bewildering beets, this was a case of Westcott’s bold flavours melding together incredibly once again.

Two types of lamb, a roasted loin and a braised belly, with buttery, melt-in-your-mouth cabbage, laden with a duo of zesty, animated sauces. The tenderness of the meat perfectly punctuated by warm hits of dense, black garlic.

Even the broccoli had been prepared with plenty of care, acting like a neutraliser throughout. The glass of water you chug halfway through a night out to stay on the straight and narrow.

Lamb is notorious for being a pain to get right, but our chef and his team have evidently tackled it, twice over, without breaking a sweat.

For a second I wonder if the addition of the green olive tapenade was really necessary in the midst of this dauntlessness. Handing back an empty plate to one of Sloane Place’s waiting staff – who were all seamless, friendly, and genuinely knowledgable about each dish – tells me I was being stupid.

Should there have been a jus with so much lamb involved? Not really. Sloane’s wine pairing, a spicy red 2018 Savigny acts like one way better than throwing a third sauce into the equation.

I’m a sucker for a vague menu description, especially when it comes to sweets.

My love for sugar in all its forms means I’m seldom ever disappointed when a dessert reveals itself to be something completely different from what was expected. This could have literally been anything.

Think about it – a trio of sweet chocolate, creamy yogurt, and sharp blackberry could end up in a tart, cake, or pudding bowl.

What arrived was a dessert in a less unified sense. Everything presented here had been through some sort of motion, an end product quite unlike its original form, a metamorphosis that guides your palette away from wherever you thought we were headed.

A chocolate mousse, quenelled to perfection, on a bed of chocolate soil and fresh berries. Its structure felt firm and resisted all attempts for our spoons to tackle it at first, suggesting it had been set, then frozen, then granted time to become malleable once again.

The shard of yogurt meringue (I don’t have half the culinary knowledge to even try to guess how this came about) elevated the dessert from ‘good’ to ‘great’.

Again, the wine pairing needs some earnest recognition here. Is it weird for a 25-year-old to have never tried, nor cared for, dessert wine? Happy to admit fault here if so.

Think of the coolest, most refreshing Ribena you’ve ever had. July summer, frosted glass levels of cool. Then add alcohol. Voila! That’s an Elysium Black Muscat for you.

Much like the eels, Lee Westcott is once again responsible for bringing a new idea to the table and leaving us with the desire to consume it at the nearest availably opportunity.

A cosy assortment of complex dishes paired with drinks to die for. Westcott is daring without being pretentious and never deviates from the task at hand – to produce six plates of delicious, autumnal British offerings.

We will absolutely be making a return to Sloane Place to see what – or whom – they have in store next.

Lee Westcott’s residency at Sloane Place, Chelsea, runs from November 17 to November 20. The full six-course tasting menu is priced at £75 per head, £60 for wine pairings.

Five years after Grenfell, are all cladding victims now going to get help? | Housing