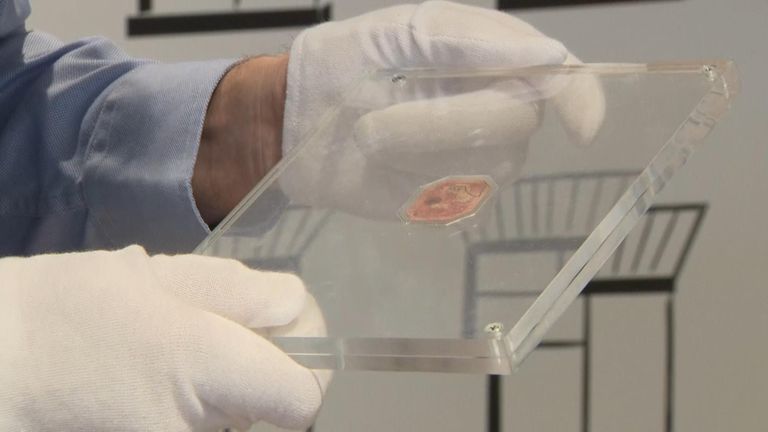 The world’s most expensive stamp – nicknamed “the Mona Lisa of the stamp world” – has gone on display to the public.

It was flown into the country between two security guards in July, before being delivered to the stamp merchant in an armoured truck.

Now it is on display in central London until 18 December.

Image:
The stamp is now on display to the public

The stamp, printed in black on magenta paper and measuring 29 x 26mm, features a three-masted sailing ship, as well as the motto “Damus Petimus Que Vicissim” which translates to “we give and expect in return”.

Stanley Gibbons has created a series of exhibits around the 1c Magenta and its history, and visitors can learn about the stamp’s owners – from schoolboys to shoe designers, and murderers.

Weighing one-twentieth of a gram, gram-for-gram it is believed to be the most valuable man-made item in the world, at £120m per gram.

By comparison, the pink star diamond is £4.8m per gram, while Californium, used in oil production, is valued at £20m per gram. 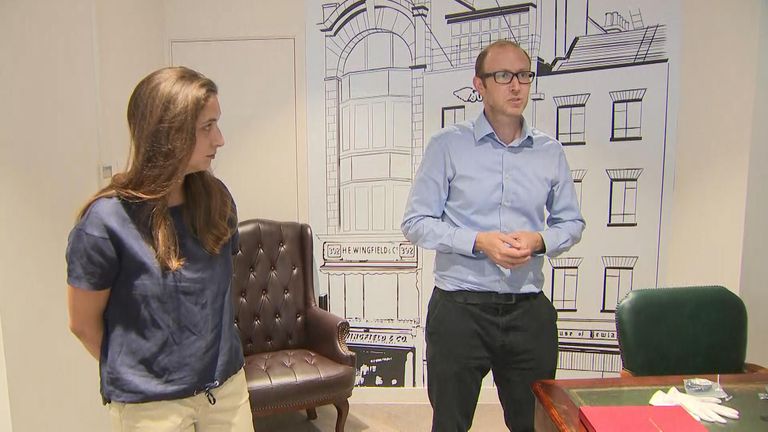 Image:
Graham Shircore (right) and Victoria Lajer from Stanley Gibbons are thrilled with the latest addition

The stamp has had 12 owners – including a killer who tried to offer it in return for a reduced sentence at court – but soon tiny parts will be sold as part of a shared ownership scheme.

It was first discovered by a 12-year-old schoolboy, L Vernon Vaughan, amongst some family papers in 1873.

He sold it for six shillings, apparently convinced that he would be able to find a better example of the stamp, but no one ever has.

The stamp is on display to the public from 11am to 6pm every Monday, Wednesday, and Friday from 8 November to 17 December, with Saturday openings on 20 November and 4 and 8 December at 399 Strand, London.