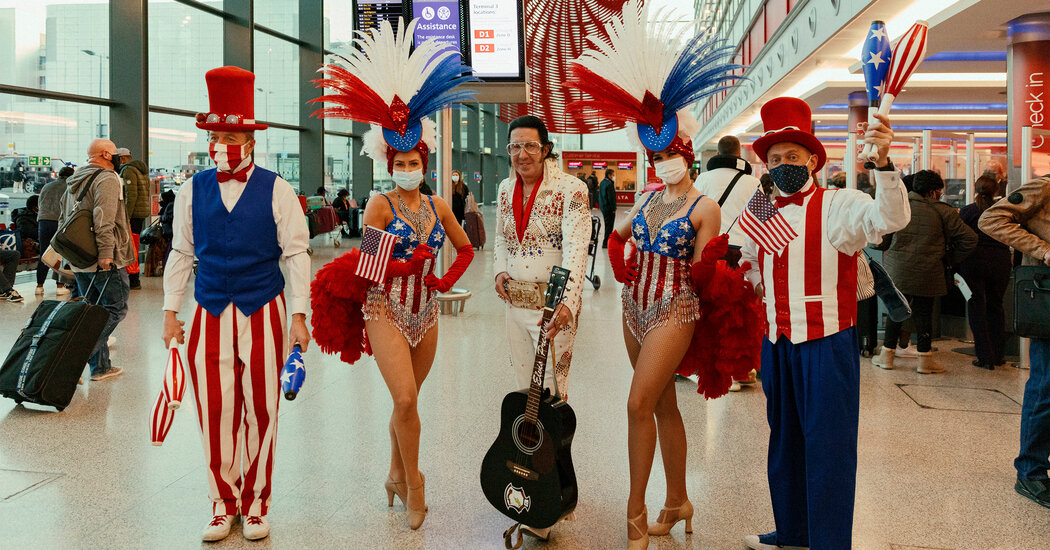 Thousands of excited passengers flocked to Heathrow Airport on Monday for the first flights to the United States out of London since the Biden administration lifted a travel ban on many international visitors.

The passengers were welcomed by dozens of airline employees, who beamed and waved American flags as they ushered guests toward designated areas for documentation and security checks.

As of Monday, foreign travelers can enter the United States if they show proof of full vaccination and a negative coronavirus test taken within three days of departure. Unvaccinated Americans and children under the age of 18 are exempt from the requirement, but they must take a test within one day of travel.

“New York, baby, here we come,” shouted one passenger as he high-fived a Virgin Atlantic staff member who was dressed as Elvis Presley. “God bless America,” yelled another.

Long lines quickly formed at check-in counters as passengers fumbled through their phones and printed-out documents, preparing their required paperwork.

“Goodness, I feel so nervous,” said Bernadette Sumners, 56, from Stratford-on-Avon, England, who was taking her first flight since the start of the pandemic to visit her daughter in Oregon and her son in New York.

“There so many things to remember and organize,” she said as she sat on a bench in the departure terminal, refreshing her email feed every few minutes as she waited for her negative coronavirus test result. “It’s very stressful, but I know it’s going to be worth it when I see my children and meet my grandchildren,” she said, her eyes welling up with tears.

Others were surprised by how organized and quick the process was. “I came four hours early to give myself a good margin for error, but the whole process is super easy and efficient,” said Noah Cunningham, a 46-year-old screenwriter from London, who was traveling to New York for work.

“When governments impose these travel restrictions they act as if people just travel for leisure, but this ban has been a killer for business,” he said. “I didn’t want to lose a day. As soon as the lifting of the ban was announced I booked my ticket.”

A group of three women waited in line to check into their New York flight with stacks of luggage emblazoned with American flags. “Most of these bags are empty,” said Julia Jacobs, a 39-year-old real estate agent. “We’re off to the Big Apple for some Christmas shopping and Christmas cheer. It’s been such a depressing two years, we need to see those bright lights and do some retail therapy.”