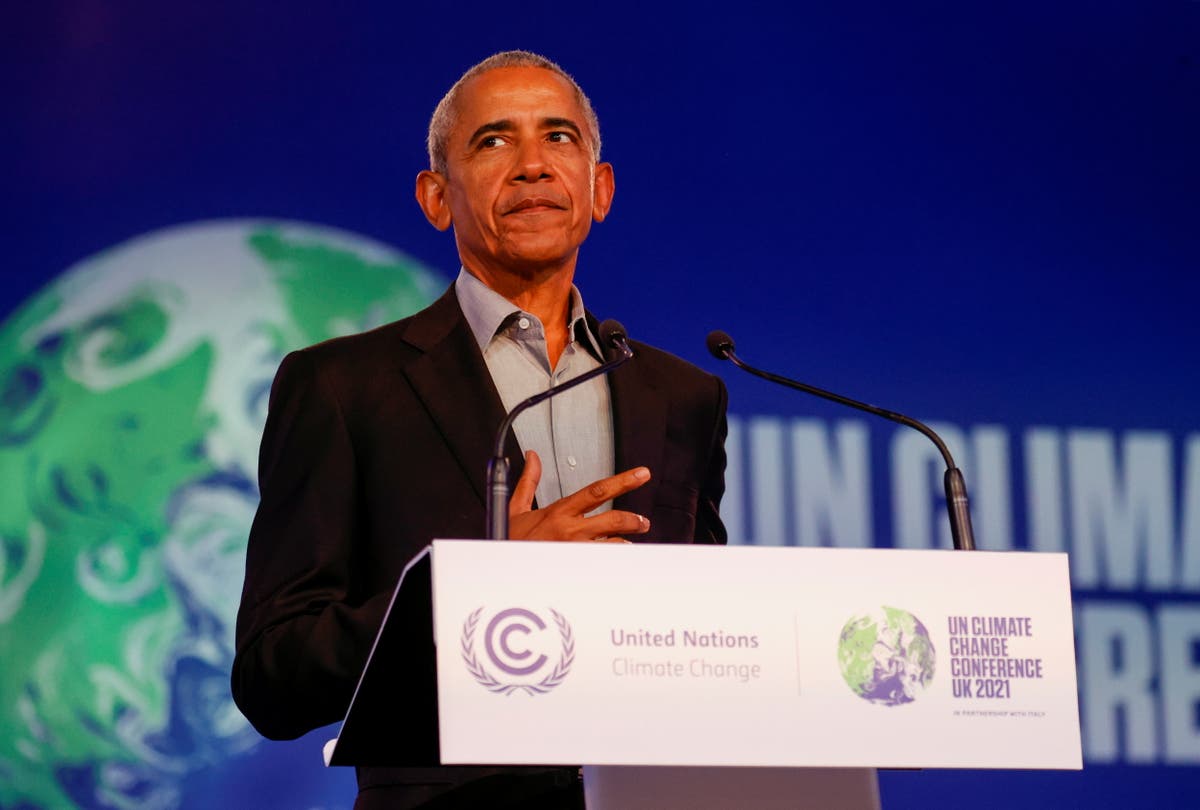 As the Cop26 summit in Glasgow enters its second week, the issue of “loss and damage” is taking centre stage at the meetings today – as world leaders seek a consensus on how to fund climate adaptation in the poorest and most imperilled nations.

Addressing several events on Monday, Barack Obama warned delegates that while the pledges made so far represent “real progress” if they are followed through, “not enough” has been done to avert warming of more than 1.5C.

The former US president called for “ongoing activism” and “citizen pressure” on governments and the private sector to ensure they honour their commitments, warning that “most countries have failed to meet the action plans they set six years ago” in Paris – as he also took aim at China and Russia’s absence.

Ahead of Monday’s meeting, the UK government announced a pledge of £290m, most of which will go to Asia Pacific nations. Diplomats and negotiators hope the talks will raise further funding pledges to add to the billions already raised by states including Australia, Canada, Denmark, Japan, New Zealand, Norway, Switzerland and the US.

Over the weekend, tens of thousands of climate protesters took to the streets in Glasgow, London and around the world in a demand for swifter action to combat the global heating crisis. In Glasgow, up to 50,000 people joined a march through the city, from Kelvingrove Park to Glasgow Green.

Concluding his remarks, Barack Obama quoted Shakespeare’s Othello in saying: “What wound did ever heal but by degrees?”

“Our planet has been wounded by our actions – those wounds won’t be healed today, or tomorrow, or the next, but they can be healed by degrees,” the former US president said.

“If we start with that spirit and each of us can fight through the occasional frustration and dread, if we pledge to do our part and then follow through on those commitments, I believe we can secure a better future. We have to.

“And what a profound and noble task to set for ourselves. I’m ready for the long haul if you are, so let’s get to work.”

Barack Obama said that when he is feeling despondent about progress in climate change he reminds himself that “cynicism is the recourse of cowards.”

He added: “We can’t afford hopelessness, instead we are going to have to muster the will and the passion and the activism of citizens, pushing governments, companies and everyone else to meet this challenge.”

The “most important energy in this movement is coming from young people”, the former US president said, telling them “you are right to be frustrated” because “folks of my generation” have not done enough to deal with “a cataclysmic problem that you now stand to inherit”.

As the public events and speeches enter their second week, the thorny formal negotiations continue to take place behind closed doors. But, as the speakers onstage frequently remind them – time is running out.

Addressing the plenary earlier, the UK’s lead negotiator Archie Young suggested that plans are being drawn up for “late-night working”, warning: “We will need to work at pace.”

Meanwhile, The Times reported last night that Downing Street is planning for Boris Johnson to make a last-minute trip to Glasgow if talks remain deadlocked towards the end of the week.

Barack Obama praised the actions of UK, EU, South Korea and Canada for their proactive plans to cut emissions.

But added: “We are nowhere near where we need to be yet. For starters, despite the progress that Paris represented, most countries have failed to meet the action plans they set six years ago.

“And the consequences of not moving fast enough are becoming apparent all the time.”

He added that “parts of the world are becoming more dangerous to live in” and that is “triggering migration patterns” and “worsening conflict”.

UK minister and Cop president Alok Sharma has called for more “urgency” to meet the goals of the Paris Agreement, as ministers arrive at Cop26 this week to help hash out a final agreement from the conference.

“We want to forge [an] agreement that means we see more action this decade to help keep the limit of 1.5C global temperature rise in reach,” he told reporters at a press conference attended by The Independent’s climate correspondent Daisy Dunne.

It comes after the UK presidency of the Cop26 summit released a draft text of the possible elements that will be included in the final agreement from Glasgow on Sunday.

Greenpeace described the document as “exceptionally weak” over its failure to mention fossil fuels.

Most nations “have failed to be as ambitious as they need to be”, Barack Obama lamented, warning that “the ratcheting up of ambition that we anticipated in Paris six years ago, has not been uniformly realised”.

“I have to confess – it was particularly discouraging to see the leaders of two of the world’s largest emitters, China and Russia, decline to even attend the proceedings,” the former US president said – criticising the nations’ national plans, which he said “so far, reflect what appears to be a dangerous lack of urgency, a willingness to maintain the status quo”.

Mr Obama said that – just as with the US and Europe – China, India and Russia, as well as Indonesia, South Africa and Brazil, are all needed to lead on the issue of climate change, adding: “We can’t afford anybody on the sidelines.”

“I recognise we’re living in a moment when international cooperation has waned, a moment of greater geopolitical tension and stress – in part because of the pandemic, in part because of the rise of nationalism and tribal impulses around the world, and yes because of a lack of leadership on America’s part for four years on a host of multilateral issues,” he said.

While it is harder to get international cooperation amid these tensions, Mr Obama insisted climate change should transcend normal politics.

Cop26: Barack Obama calls out China and Russia for not attending climate summit

Barack Obama said he had a “hard time” staying away from Cop26 in Glasgow.

“Even though I’m not required to attend summits like this this any more, old habits die hard,” he told delegates.

“And when the issue at hand is the health of our planet, and the world our children and our grandchildren will inherit, then you will have a hard time keeping me away.

Barack Obama is now talking about his successor’s decision to abandon the Paris accord he helped negotiate in 2015.

“Back in the United States some of our progress stalled when my successor decided to unilaterally pull out of the Paris Agreement in his first year in office,” he said.

“I wasn’t real happy about that. And yet the determination of our state and local governments, along with the regulations and investment my administration had already put in place, allowed our country to keep moving forward.”

‘We have not done nearly enough,’ Obama says

Barack Obama is back onstage at Cop26, to much applause.

“When it comes to climate, time really is running out,” the former US president said.

“You heard the same message from world leaders last week and now they’ve left here’s what we can report. Meaningful progress has been made since Paris and the agreements made here in Glasgow thanks to so many of you including my friend John Kerry – who is tireless.

“Thanks to your efforts we see the promise of further progress. What is also true is that collectively and individually we are still falling short.

“We have not done nearly enough to address this crisis, we are going to have to do more.”

More than 500 lobbyists linked to major oil and gas companies are attending the Cop26 climate summit in Glasgow, a larger number than the delegation of any single nation at the talks.

The discovery of the prevailing access that the fossil fuel industry has been granted to a conference – with the stated goal of curbing global temperature rise largely driven by the burning of fossil fuels – was laid out in new analysis from international NGO Global Witness.

Researchers analysed the participant list published by the United Nations, which is hosting the Glasgow summit.

The Independent’s senior climate correspondent Louis Boyle has the details.