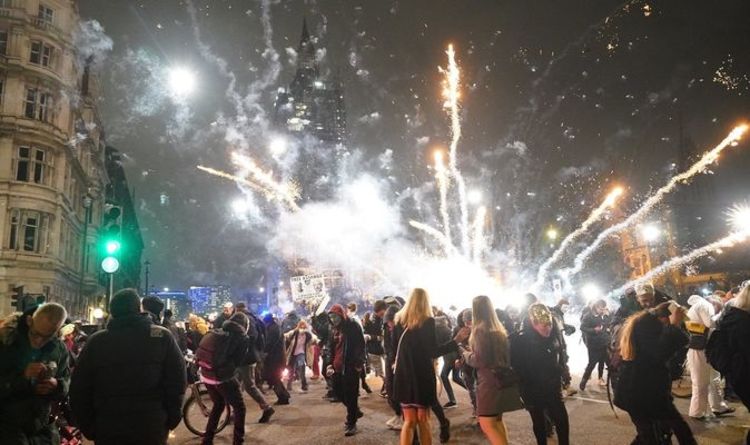 Hundreds of people have descended on London for the annual anti-Government protest, which first took place in 2012. The Metropolitan Police are on scene and have moved the demonstrators along Whitehall to Trafalgar Square.

The Met Police tweeted: “Our policing operation on tonight’s demonstrations is underway.

“A group of protesters have moved from Parliament Square along Whitehall, #Westminster.

“A number of fireworks and flares have been set off.

“Officers are on scene engaging with the crowd.”

Protesters planned several locations across the capital including Trafalgar Square and Parliament Square as part of the demonstration.

In the footage, the demonstrators can be heard shouting: “Freedom” as they marched through the streets of London.

Hundreds of protesters were filmed standing outside Downing Street while others were seen holding flares outside the Houses of Parliament.

The Million Mask March – as the annual Bonfire Night protest is known – rallies against Government corruption, lockdown restrictions, and inequality and homelessness.

The Guy Fawkes masks are inspired by the graphic novel V for Vendetta, which was adapted in a film in 2005.

Last November, more than 100 people were arrested during an anti-lockdown march across London.

Commander Jane Connors said at the time: “We are eight months into this national pandemic and frankly there can be no excuse for people to dangerously breach regulations which are there to prevent further spread of coronavirus.

“Tonight, a crowd of people chose to ignore the new regulations, to behave irresponsibly and meet in a dangerous manner.

“More than 100 of these people have now been arrested and will have to face the consequences of their actions.”

One officer told the protesters: “You need to leave, you are breaching coronavirus restrictions.”

The police force said the protesters were ignoring directions from officers and warned enforcement action would be taken.

The motive for the March varies, but includes some consistent themes prevalent in the Anonymous movement, including: corruption in politics, demilitarization, police violence, and self-governance.

The marches are set in motion to allow ordinary citizens to collaborate in order to create societal change through alterations to their governments.

They are coordinated through a host of channels with most prevalent being word of mouth and social media.

Shortly before 10pm on Friday night, Metropolitan Police issued a statement on Twitter.

It read: “At this time, we have made nine arrests during tonight’s operation.

“Frustratingly, five of our officers have been injured. We are providing them with support.

“A number of our officers remain in Parliament Square.”