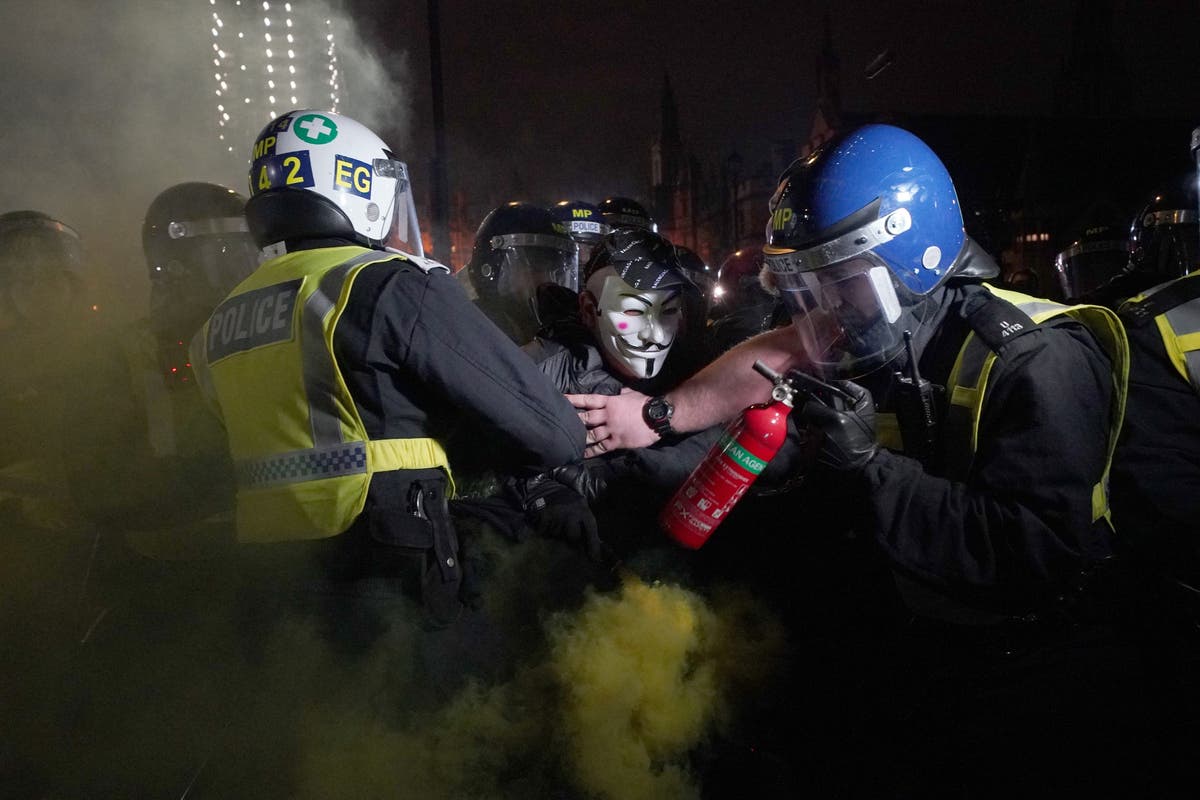 olice have ordered the dispersal of protesters who clashed with officers and set fire to an effigy of Boris Johnson in central London.

The Metropolitan Police said nine arrests were made and five officers were injured.

Anarchists and anti-vaxxers were among the demonstrators on the the annual Million Mask March.

Some launched fireworks at officers, forcing riot police to force their way into the crowd to confiscate the missiles.

A crowd gathered to watch the burning of the effigy with one at least one demonstrator shouting “burn, Boris, burn”.

Other groups of anarchists joined arms and rushed the police around Parliament Square, Trafalgar Square and Oxford Circus.

Some were seen being frogmarched away by police in riot gear.

A section 35 dispersal order was put in place ordering the crowds to leave the area.

Videos have emerged of protestors joining arms and rushing police officers in clashes, while other clips have shown the anarchists launching fireworks towards police ranks and setting Boris Johnson’s effigy alight at the foot of Nelson’s column.

The police were forced to set up barricades at various locations across the capital to contain the march which protesters have vowed “will go down in history”.

Police tweeted: “A Section 35 dispersal order remains in place for Parliament Square and areas in Westminster.”

They later wrote: “Frustratingly, five of our officers have been injured.

“We are providing them with support. A number of our officers remain in Parliament Square.”

The Million Mask March, also known as ‘Operation Vendetta’, is an annual protest which usually takes place on November 5 to coincide with bonfire night.

It is an anti-government and anti-establishment protest which was first held in 2012 and has been held every year since in multiple cities across the world, with the protests in London and Washington D.C. being the most prominent.

The protest is closely associated with the international activist group ‘Anonymous’ and rails against government corruption, capitalist greed, and the erosion of civil liberties.

‘Anonymous’ is an international group of leftist libertarian activists, some of whom are hackers, devoted to the ideals of personal freedom and a society free of centralised power.

Many of the protestors at the Million Mask March are known for wearing full face Guy Fawkes masks styled on the graphic novel ‘V for Vendetta’.

The Met police released a statement this morning in anticipation of the protest, saying that intelligence suggests some protestors have travelled to London to target police officers.

Mounted divisions and dog units have also been called in to support the police’s efforts to prevent the march from descending into a full-blown riot.

‘This policing plan has been developed following a continual review and thorough assessment of intelligence which suggests some groups are intent on causing disorder or targeting police officers with violence,’ said a Met spokesperson.

‘As a precaution, officers will be equipped with specialist public order uniforms and a number of protective barriers have been set up outside a number of locations in London.

In a series of Twitter posts, the Met said: “Our policing operation on tonight’s demonstrations is underway. A group of protesters have moved from Parliament Square along Whitehall, #Westminster.

“A number of fireworks and flares have been set off. Officers are on scene engaging with the crowd.

“Part of the group have moved off from Trafalgar Square and are now in Leicester Square. Officers remain on scene.”

Many of the demonstrators taking part in the protest held signs protesting against the coronavirus lockdown.

One, who gave his name only as Richard, from London, said the protest, which has taken place on November 5 for several years, was a “continuation” of the “anti-Covid” marches.

“It’s basically a continuation of the anti-Covid marches that we’ve been on since the beginning of the year,” he said.

“It’s a couple of fingers in the direction of the establishment.”