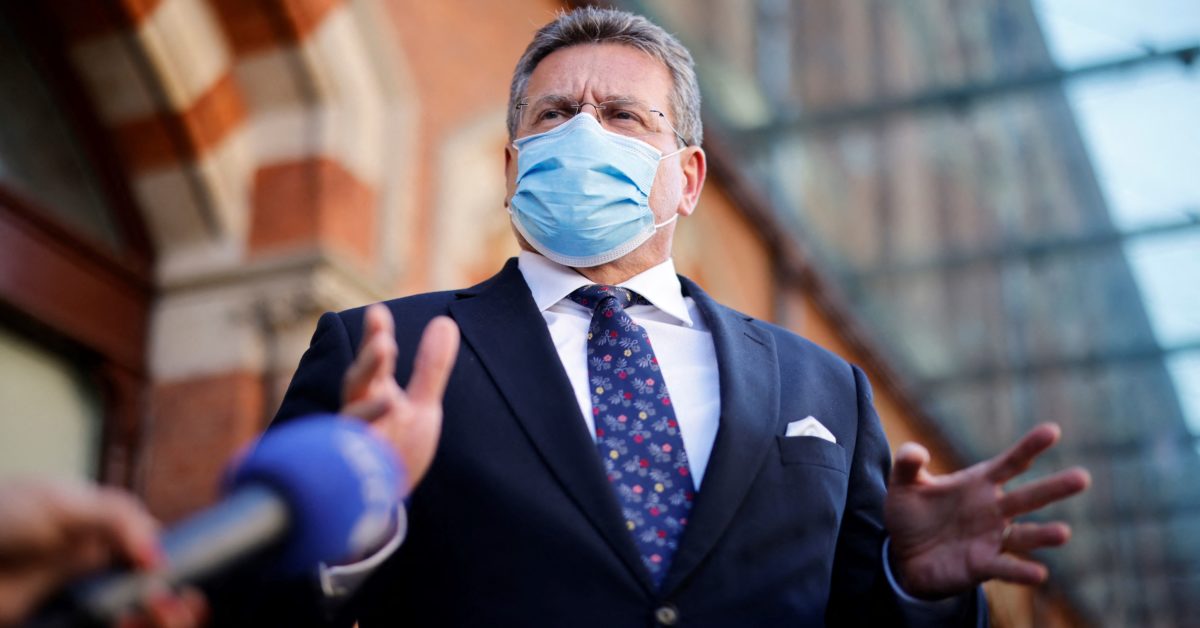 LONDON — The EU is arguing the U.K. must make concessions to resolve a deadlocked post-Brexit trade dispute over Northern Ireland, warning that time is running short to reach a deal.

The plea came as European Commission Vice President Maroš Šefčovič and U.K. Brexit Minister David Frost met Friday in Brussels to discuss the disagreement, which centers on trade across the Irish Sea and the so-called Northern Ireland protocol that governs it. Three weeks of technical talks have so far failed to resolve the differences. And Friday’s meeting similarly ended in a stalemate.

The protocol was drawn up to protect the EU’s single market post-Brexit while avoiding a politically sensitive hard border between Northern Ireland, part of the U.K., and the Republic of Ireland, an EU member country. But the arrangement has proved deeply unpopular with Northern Ireland’s unionist politicians, while the U.K. government has argued it causes unnecessary bureaucracy for goods moving from Great Britain to the region.

Delivering a short statement after the meeting, Šefčovič lamented that the U.K. was not making concessions and insisted the EU had already made a significant effort to reach common ground by putting forward a comprehensive and unprecedented package of proposals in October.

“Until today, we have seen no move at all from the U.K. side. I find this disappointing and once again I urge the U.K. government to engage with us sincerely,” he said. “We should focus all efforts on reaching a solution as soon as possible.”

Amid growing concerns in Brussels that the U.K. might soon suspend the protocol or parts of it by triggering the Article 16 clause, Šefčovič warned that such a move “would have serious consequences” for Northern Ireland and for the EU-U.K. relationship.

EU and British officials will continue talks on the protocol next week, with Frost and Šefčovič expected to meet again on November 12 in London. The Commission and the U.K. have both refused to set a timescale for how long discussions will go on, but both had previously agreed they wanted to reach a consensus before the end of the year. In his statement, Šefčovič stressed discussions next week would be “important.”

During the meeting, Frost told his EU counterpart that progress “had been limited and that the EU’s proposals did not currently deal effectively with the fundamental difficulties in the way the protocol was operating,” a U.K. government spokesperson said in a statement. But the U.K. still believes these gaps could still be bridged “through further intensive discussions,” they added.

On his arrival to the Commission’s building in Brussels, Frost ruled out triggering Article 16 on Friday, but insisted that option “is very much on the table and has been since July.”

The meeting included a short discussion on the French-U.K. row over post-Brexit fishing permits, during which Frost restated French vessels must provide evidence of previous fishing in U.K. and Jersey waters in order to receive a license. But many small French boats that enjoyed access to those waters before Brexit have struggled to meet that requirement, at the risk of being banned from operating in the area.

Šefčovič said the Brexit Trade and Cooperation Agreement is “clear” when it comes to fishing permits. “Vessels that are fishing in the territorial waters of the U.K. and Crown Dependencies should be allowed to continue. All vessels entitled to a license should receive one,” he said.