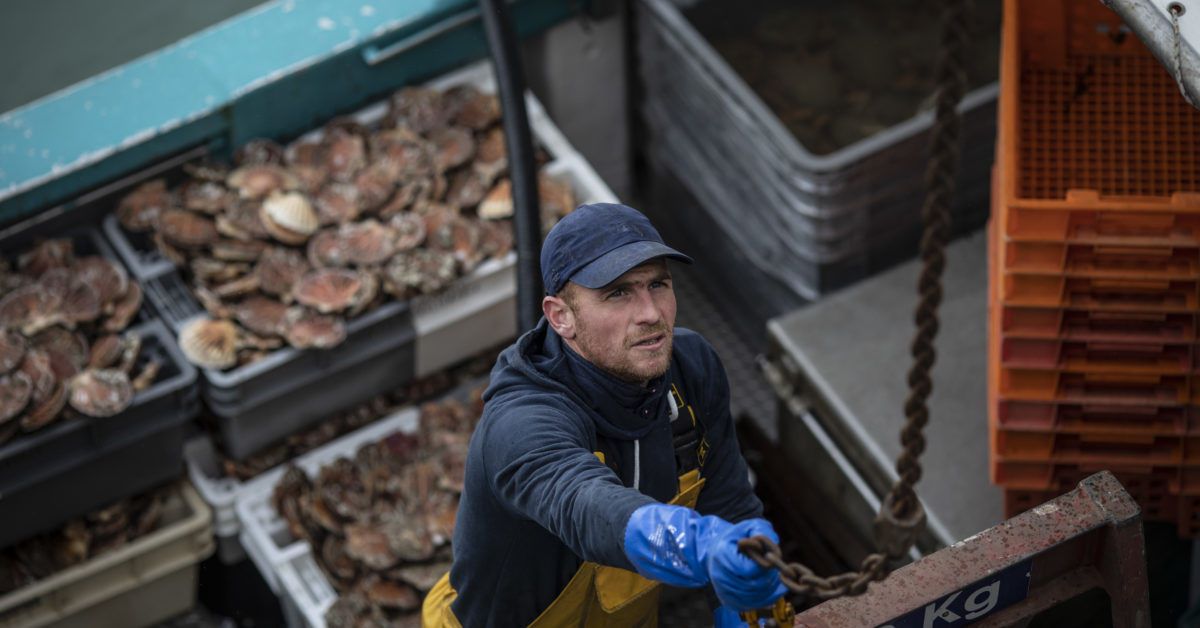 LONDON — The EU and France have hinted at a looming resolution to the post-Brexit fishing row that has pushed relations between Paris and London to breaking point.

The dispute was triggered by the U.K. and Jersey governments’ decision to request EU fishers prove a track record of fishing in their waters as a prerequisite for receiving post-Brexit fishing permits. Many small French boats that enjoyed access to those waters before Brexit have struggled to meet that requirement, at the risk of being banned from operating in the area.

After a heated exchange of threats and counterthreats, Britain and France reached a temporary truce late Monday, when French President Emmanuel Macron announced his government was postponing retaliatory action scheduled for Tuesday to allow talks on solutions to take place.

Technical talks over the past two days which brought together officials from the European Commission, France, Jersey and the U.K. have allowed them “to chart the way forward on several aspects and have created a positive dynamic aiming at a solution,” a Commission spokesman said Wednesday.

These talks, supervised by political leaders, have provided all parties with a “better understanding of the outstanding issues which have been impeding quicker progress and we hope that all positive engagement on all sides will soon translate into concrete results,” the spokesman added.

The discussions continued Wednesday, also involving Guernsey officials. Officials are expected to focus on the applications from 14 vessels seeking access to U.K. waters and a further 13 requesting permits to fish off the coast of Jersey, according to Annick Girardin, France’s maritime minister.

As of Wednesday morning, the U.K. had issued 1,793 licenses to EU vessels wanting to fish in British waters, and there were a further 38 pending, according to data released by the British government in a written parliamentary statement.

The self-governing island of Jersey had issued 113 permanent licenses and 49 temporary permits expiring on January 31, 2022, in the absence of further evidence of previous fishing in its waters. A further 55 French boats had lost permission to fish in Jersey waters. Guernsey, another Crown dependency, has allowed access to 167 French vessels until January 31, 2022, with a view to issue permanent permits on December 1.

Speaking at a press conference Tuesday evening, British Prime Minister Boris Johnson insisted the U.K. government’s position had not changed, when asked if he would relax the requirements as part of the talks with the French.

“We are working very, very closely with our French friends and partners on the things that matter most to the people of the world, and that is tackling climate change and reducing CO2,” said Johnson.

“By comparison with that hugely important issue, the ones you mentioned are really vanishingly unimportant, but since you ask about whether the U.K. has changed its position on the fishing issue, the answer is no,” he added.

This message was echoed by Johnson’s official spokesman Wednesday, when he told journalists that the U.K. position “as regards to how we grant licenses has not changed in any way.”

“It’s entirely up to the French government if they want to reimpose the threats that we saw they both announced and stood back from in recent days,” he added.

U.K. Brexit Minister David Frost and France’s Europe Minister Clément Beaune are due to discuss fishing and a separate row over trade arrangements in Northern Ireland at a meeting in Paris on Thursday.

Jean-Baptiste Djebbari, France’s transport minister, told Europe 1 radio Wednesday that he had spoken to his British counterpart the day before. “The spirit is a constructive one on this [fisheries] topic,” he said.

Meanwhile, the British scallop dredger Cornelis Gert Jan, which has been held in Le Havre since it was seized in French waters last week, was freed Wednesday afternoon, according to a U.K. official. Its release was ordered by a French court, which allowed the boat to leave France without bail following a hearing.

This article has been updated.

Agency stock ‘not hanging around’ as portal urges…