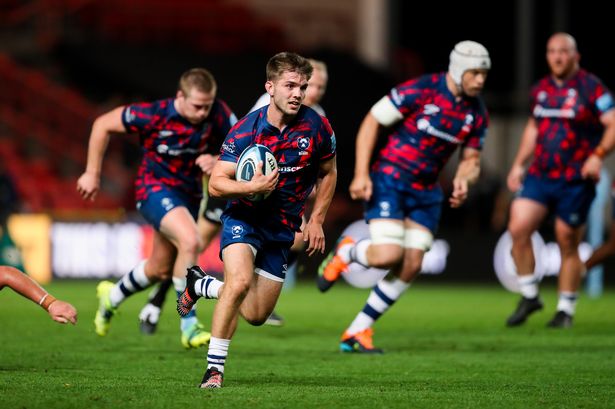 Bristol Bears are expected to have their ‘coach on the field’ Callum Sheedy back this weekend to face Worcester Warriors at Ashton Gate on Saturday.

Sheedy has been away training with Wales this week but with Wayne Pivac selecting four fly-halves in his squad for the Autumn internationals in Dan Biggar, Gareth Anscombe and Rhys Priestland, Sheedy looks set to return to his Premiership club while the national side host South Africa at the Principality Stadium.

The Bears will get official confirmation on Sheedy this evening with Ioan Lloyd in the wings on standby to play stand-off against Worcester.

Meanwhile, Lam confirmed scrum-half Harry Randall is set to be out for approximately seven weeks after injuring his hip flexor training with England but said he had no frustration at the fact it was originally caused in a paddle-boarding incident in a team-building exercise.

The Bristol direct of rugby said: “I have seen players get injured stepping off the bus before.”

Lam was quick to point out the injury has less impact on Bristol than you might imagine as the club had planned for Randall to be absent with the national team for all of November anyway.

He also believes the Bears are in a stronger position to cover Randall’s unavailability than last season when the 23-year-old was sidelined for two months with an ankle injury sustained in the build-up to the Six Nations.

The addition of former Saracens number nine Tom Whiteley this summer has provided increased competition at the club in the key position.

Lam said: “Tom was excellent last week against Irish [when he came off the bench for his second appearance of the season].

“He has been learning our ways and he has fitted in really well.

“I said last year scrum-half was an area we wanted to strengthen and I believe we have done that.

“We have got Theo Strang as well who has come over on trial and he has played some of the A games.

“What I love about our four scrum-halves is they work really well together, even this morning I saw them out there doing extras, so there is a really good understanding, friendship and competition amongst them.

“We are certainly in a better place this year and I want it to be a headache for me when Harry comes back.”

The good news for the Bears is both lock Joe Joyce and winger Toby Fricker are expected to be fit to play this weekend after being withdrawn in the 21st minute following a clash of heads during the 45-33 win away at London Irish last weekend.

Lam explained: “They both passed their HIAs at London Irish but they got timed out and there was only one doctor. So that was a bit frustrating.

“We will have a look at that as they missed the test timing by just a few seconds.”

Are you mad about Bristol Bears?

If so, you could receive the latest club news straight to your phone by signing up to our WhatsApp service.

Bristol Bears writer John Evely will send you links to the breaking stories, direct to your mobile, via the easy-to-use app.

Among the things you can expect are transfer news, interviews, match reports, injury updates, team news and live blogs. You could even use it to ask him a question.

If you would like to sign up, save the number 07715 770289 to your phone (you must do this to receive our messages), then send BRISTOL BEARS in a message to that number via WhatsApp. We recommend saving the contact to your mobile as ‘Bristol Bears News’.

To unsubscribe at any time, just send STOP BRISTOL BEARS via WhatsApp to the same number and you will be removed from the service. Your number will not be used for any purpose other than to update you on all things Bristol Bears.

Bristol tighthead prop Kyle Sinckler is away with England this weekend who host Tonga at Twickenham on Saturday.

Lam remained tight-lipped on the injury status of his captain Steven Luatua, second-row Chris Vui, centre Sam Bedlow and winger Henry Purdy who have all been sidelined in recent weeks however having suffered no additional injuries away at London Irish last weekend there is a sense of increased competition for places within the squad heading into Worcester.

“Some players are playing really well, some are playing better than they were at the beginning of the season but collectively as a group after the bye week we came back and refocused on this season stage of our season.”

A124 Barking Road blocked in both directions after crash – latest updates