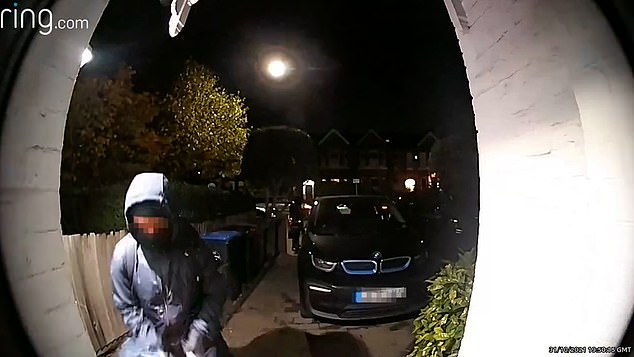 By Stephen Wynn-davies For Mailonline

This is the moment a teenage yob lit a firework and shoved it through the letterbox of a family home where it exploded in the hallway and hit the homeowner’s dog.

Rachel Lake captured the footage on the Ring doorbell camera at her home in north west London at 7.50pm on Sunday, October 31.

A teenager wearing all black clothing is seen approaching a house in north London, lighting a firework and shoving it through the letterbox before running from the scene

In footage posted on to Twitter, a teenager wearing a black hooded jacket, black gloves and a black face mask can be seen approaching the front door with a firework in his hand.

He appears to light the explosive and smoke begins billowing into shot.

After dropping the firework through the letterbox, the teenager immediately turns and flees and a number of other hooded people can be seen running down the street.

The doorbell camera also picks up audio of a dog barking from inside the property shortly after the firework is dropped through the letterbox. 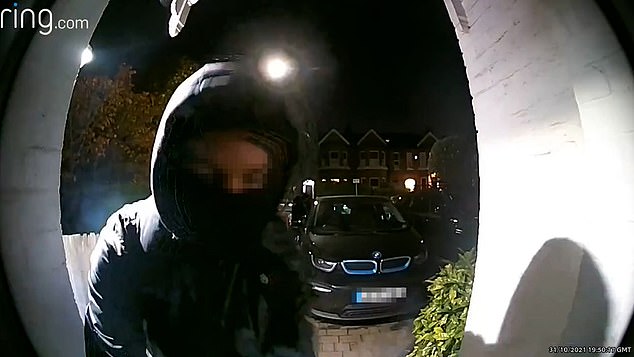 A woman is also heard screaming in the background.

Speaking afterwards, Rachel said her dog was ‘really traumatised’ after being hit by the firework but said she was not injured.

She said the incident happened at 7.50pm on Sunday when she was at home with her husband and three children aged between 15 and 22.

The incident was also reported to the police.

A spokesman for the Metropolitan Police confirmed it had received reports of the firework being dropped through the letterbox and was conducting ‘further inquiries’ after contacting the victim.

Police also said there were no reports of anyone being injured.