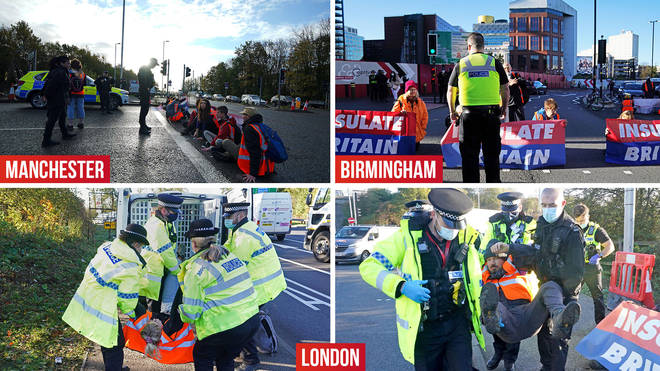 The group sent campaigners to block traffic near London, Manchester and Birmingham on Tuesday morning.

The first planned protest to the north of London was stopped by police who swooped on the group before they could make it onto the M25.

A total of 13 protesters tried to block junction 23, with all of them arrested by Hertfordshire Police for breaching the injunctions.

In hope of spreading their message further, Insulate Britain also sent campaigners to target roads in Manchester and Birmingham, following six weeks of disruption in the south.

Manchester was targeted for the first time – with a group blocking a key road near the city’s airport.

The group brought traffic to a halt at junction 6 of the M56, shortly before 9am.

Police were waiting when protesters arrived, however they were unable to stop activists getting onto the carriageway and sticking their body parts to the tarmac.

Videos from the scene show drivers becoming increasingly angry, and a number of police vehicles in attendance.

No arrests have been made and no heavy-handed tactics appear to have been used by police.

According to pictures on Twitter, the group sat down in the middle of the road shortly after 9am, with all traffic stopped as a result. 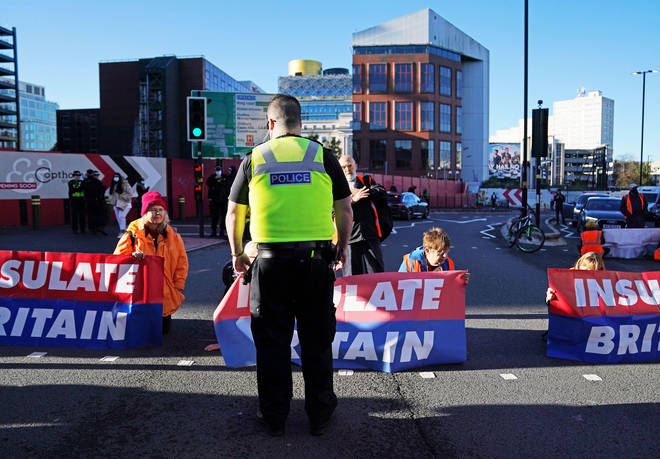 The latest protests by Insulate Britain defy a nationwide injunction by the high court, which bans the activists blocking any key roads across the UK.

It is one of a number of injunctions that the government has taken out against the group, following continued disruption on the M25, at the port of Dover and parts of central London.

“We are taking our message to people outside of London because we want everyone to know that our government is killing our children,” Insulate Britain said.

“Britain should be leading the world with radical plans to decarbonise our society, instead our government is actively setting policies that will drive emissions higher.” 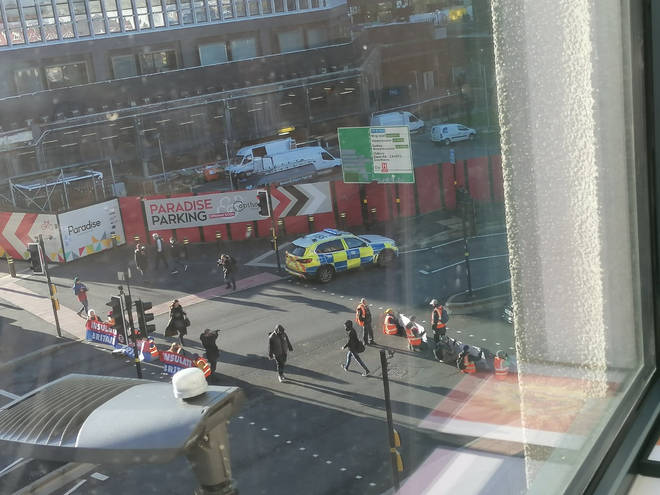 Gabby, 27, a graphic designer from Norwich said: “We are taking our message to people outside of London because we want everyone to know that our government is killing our children.

“Britain should be leading the world with radical plans to decarbonise our society, instead our government is actively setting policies that will drive emissions higher.

“The public can close their eyes but this isn’t going away, no one is coming to save you. We are being betrayed. This government is colluding in genocide.”

This is the seventeenth time that Insulate Britain has caused disruption on motorways and A roads as part of its campaign over the past seven weeks.

So far, 161 people have taken part in the campaign and there have been 770 arrests.

Insulate Britain said a group of nine supporters have received summons for injunction breaking and are due to attend court on November 16, a further 23 are expected to follow.

They face the prospect of unlimited fines and prison sentences for contempt of court.