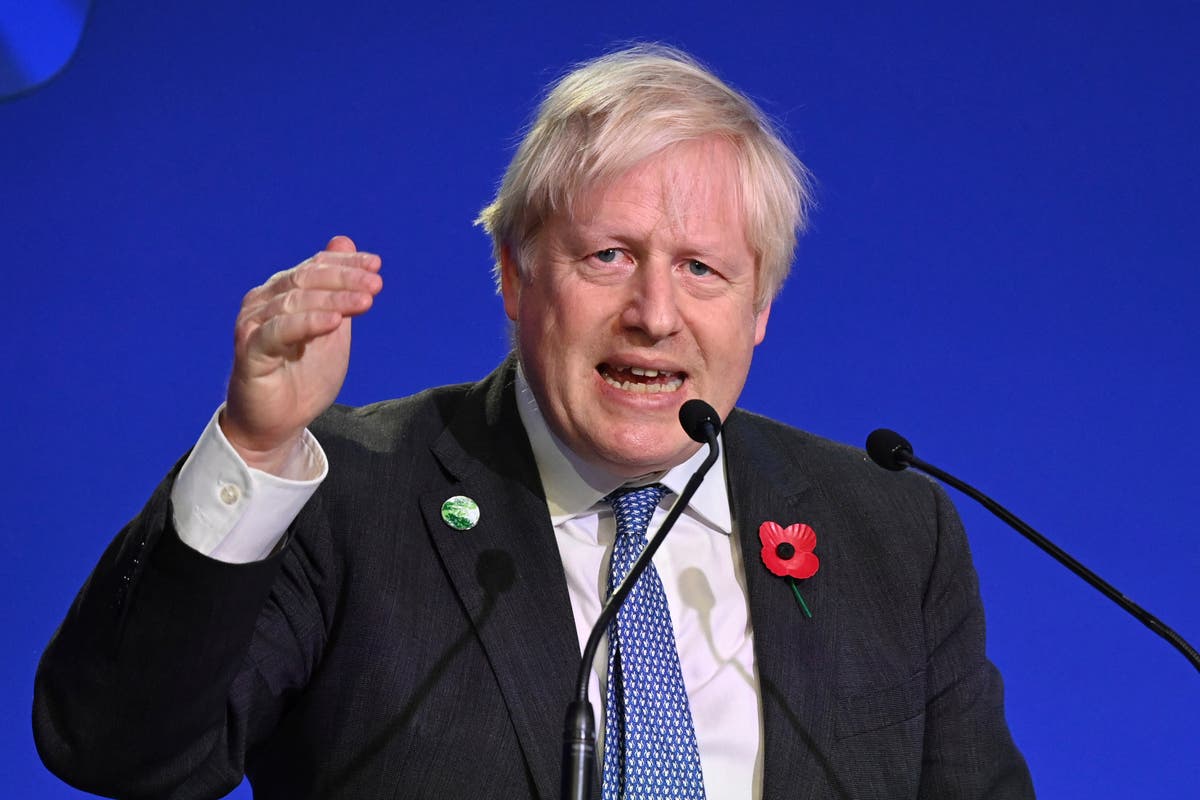 oris Johnson told a press conference at the COP26 climate summit that developed nations “must do more”.

It is one of the most potent gases and is responsible for a third of current warming from humans.

Meanwhile, more than 100 world leaders backed a “landmark agreement” to end deforestation by 2030 in the first major deal of the COP26 conference.

Jair Bolsonaro and Xi Jinping are among global leaders who will commit to the declaration on Tuesday to help protect vast areas from land-clearing, which significantly contributes to emissions.

Joe Biden has said Chinese President Xi Jinping and Russian President Vladimir Putin had made a mistake in failing to appear at the Cop26 climate change talks.

“We showed up. By showing up, I think we had a profound impact on the way, I think, the rest of the world is looking at the United States and its leadership,” he told a news conference in Glasgow.

“I think it has been a mistake, quite frankly, with respect to China, not showing up.

“They have the lost the ability to influence people around the world and here in Cop. The same way I would argue with Russia.”

Joe Biden: ‘no more time to waste’ when it comes to tackling climate change

US President Joe Biden has said there is “no more time to waste” when it comes to tackling climate change.

He tweeted: “There’s no more time to waste when it comes to combating climate change. Let this be the moment we answer history’s call.

“Let Cop26 be the start of a decade of transformative action that preserves our planet and raises the quality of life for people everywhere. We can do this.”

China’s President Xi did not come to the Cop26 summit because of the coronavirus pandemic, Boris Johnson has said.

The Prime Minister said “that doesn’t mean the Chinese are not engaging” and that “we’re seeing some signs of progress”, but he added more needed to be done.

Mr Johnson said: “I think that we need China to make commitments, China has already made a substantial commitment in the sense that they’ve moved to net zero by the middle of the century, 2060 or before, as Xi Jinping says.”

He added: “China has fantastic power to make change in the way it runs its economy, they’ve committed to no new financing of overseas coal, that’s a big change already, you’re starting to see the impact of that Chinese decision to stop financing coal overseas in the whole Asia Pacific region already.”

PM: ‘Fight against climate change is a team game’

Prime Minister Boris Johnson said the battle to keep global warming lower than 1.5C above pre-industrial levels is a “team game” during the climate conference in Glasgow

“I think that it’s a team game. I think everybody’s working very hard together to keep 1.5 alive,” he said.

Speaking at the the Cop26 conference, he said that developed countries should meet their promise to send 100 billion dollars (£74 billion) a year to less developed nations faster.

“I think that the 100 billion is still something that we’re pushing for earlier. We’re going to get it by 2023. But we need to see more.

“I thought that what Japan had to say was great. But this ain’t over. We need further action from countries around the world. And we’re certainly going to keep the pressure up.

“On India, I think the most important thing that they’ve said is that they want to decarbonise so much of their power system by 2030. That is a massive commitment.”

The Prime Minister has said that if the public did not trust him on the need to tackle climate change, they did trust figures such as Sir David Attenborough.

Speaking in Glasgow, Boris Johnson said: “If we don’t do this, if we don’t fix our climate, it will be an economic catastrophe as well as an environmental catastrophe.

“I think people need to understand that as point number one, the only way to fix this is to reduce CO2 and tackle climate change.

“I also happen to think that there’s a great wisdom in the British people and I think that they can see that this is an issue that needs to be fixed and they may not listen to me, but they certainly listen to Sir David Attenborough and they look at what’s actually happening around the world.

He added: “They’re not dumb and they can see that this is something that needs to be tackled.”

PM: We know how to cut CO2 emissions

The Prime Minister said leaders at Cop26 have begun to create “a sense of how actually you can deliver” on cutting CO2 targets, as set out at the Paris summit.

Speaking at the Cop26 summit in Glasgow, Boris Johnson said: “I was at Paris and I remember what it was like. We had this great sense that we had agreed this thing that we were going to try and cut CO2 together.

“But it was also a slightly floaty feeling because we didn’t know how on earth we were going to do it.

“There was no roadmap, there was no very clear sense of how you could do it.

“I think what you’re starting to see here at Cop26 in Glasgow is a sense of how actually you can deliver those cuts in CO2, but there is a long way to go.”

He added: “If there’s one thing that starts to give me confidence or optimism, it’s that we are starting to create – for the countries that find it most difficult to transition away from fossil fuels – we’re starting to create those coalitions of support to help them to move on.”

Boris Johnson: ‘Doomsday clock is ticking but we have bomb disposal team on site’

Prime Minister Boris Johnson said that international negotiators at the Glasgow conference have made progress.

“I think we can be confident about one thing in the days ahead – the couple of weeks we’ve got – the clock on the doomsday clock I was talking about is still ticking, but we’ve got a bomb disposal team on site, and they’re starting to snip the wires, I hope some of the right wires.”

Prime Minister Boris Johnson has said at the Cop26 press conference that “other (more developed) countries are going to have to do more” in terms of funding to tackle the climate crisis.

Responding to criticism that developing countries are not doing enough to help less economically developed nations in the fight against climate change, he said: “It’s been very humbling to sit here and to listen over the last weeks, months, to colleagues (like) Mia Mottley say the same thing.

“Why should they suffer this immediate impact, this loss and damage, because emissions that we in our country began to produce 250 years ago?

“Now we can say, for the vast majority of that period, we had no idea that the CO2 emissions we were producing were doing that damage…

The arrival of an Iranian delegation at Cop26 should be used by UK officials to press for the release of Nazanin Zaghari-Ratcliffe, Amnesty International has said.

Ms Zaghari-Ratcliffe, a British-Iranian dual national, has been in custody in Iran since 2016 after being accused of plotting to overthrow the government.

Her husband, Richard Ratcliffe, is on day 10 of a hunger strike outside the Foreign Office in London which he started after his wife lost her latest appeal.

Amnesty International said officials at the climate summit in Glasgow should be prepared to “seize the opportunity” presented by the arrival of a delegation from Iran to raise the issue of the country’s detention of UK nationals such as Ms Zaghari-Ratcliffe and Anoosheh Ashoori.

Boris Johnson: “I am cautiously optimistic but we were 5-1 down”

Boris Johnson told a pres conference at COP26 that he was “cautiously optimistic” over the fight to tackle climate change.

He said: “We must guard against false hope there’s a long way to go but I’m cautiously optimistic.

“If this was a football match we would be 5-1 down … we have pulled a goal back, but we are going to be able to take this to extra time.”

He also said that the “chainsaw massacre” of trees across the world was being addressed with an agreement by more than 100 countries to stop deforestation.