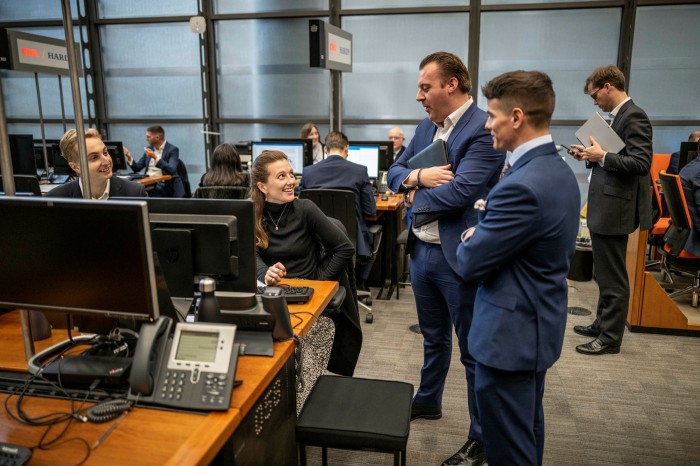 John Neal could be forgiven for looking enviously at those chief executives agonising over whether to order employees back to the office.

As the head of Lloyd’s of London, Neal is not simply wrestling with the future working habits of one company, but those of the about 400 firms that make up the centuries-old specialist insurance market, providing cover on everything from a supertanker sinking to a professional footballer breaking their leg.

After three separate pandemic interruptions, insurance brokers and underwriters are gradually returning to the distinctive inside-out building at 1 Lime Street that Lloyd’s has called home since 1986.

But the roughly 5,000 market participants now there over the course of a week — leaving aside the staff for the corporation that run the market — remains just a quarter of pre-pandemic levels. Neal, who has run Lloyd’s since 2018, is optimistic those numbers will climb, pointing to a doubling each month.

“My sense is, it is going to take us through to the spring to see the levels settle,” he told the Financial Times, putting the slower-than-expected return down to firms being reluctant to compel people back amid uncertainty over the government’s Covid-19 containment strategy.

For those venturing in, Tuesday, Wednesday and Thursday are the most popular days, and on a Thursday the Lamb Tavern pub on Leadenhall, a popular destination, is humming again.

Where numbers do settle will not only define the future of Lloyd’s — and how major risks are underwritten — but also reveal how deeply the pandemic has changed a global financial centre that historically has prized the value of face-to-face contact.

How many of their people insurers send back to the market is a matter for individual firms, and Lloyd’s cannot force brokers to come in. The market is not requiring masks, proof of vaccination or proof of a negative Covid test for entry to the building.

Neal’s own expectation is for market participants to be in the building between three and four days a week in the new normal, arguing that some face-to-face interaction is critical for firms to collaborate, innovate and train junior staff.

The firms themselves are locked in a debate over whether the coronavirus crisis should be seized upon as a rare opportunity to permanently overhaul practices.

Andrew Carrier, chief underwriting officer at Lloyd’s insurer MS Amlin, said the pandemic had “accelerated an evolution that was overdue, stepping away from a trading model that perhaps we had all convinced ourselves could only operate and function effectively one way”.

At the heart of the debate is the so-called underwriting room — in practice, four floors around an atrium featuring the historic Lutine Bell and the Loss Book, where lost ships are recorded. The trading space has long been divided into boxes, where an underwriter sits waiting for brokers to pitch business. These mimic the tables of Edward Lloyd’s 17th-century coffee shop, the roots of today’s market.

It is the broker’s job to find insurers to cover the risks of a particular client, and the underwriter’s to choose which to accept and at what terms. Lloyd’s reports the aggregate performance of the insurers within the market.

An announcement for how the underwriting room will be reconfigured — part of an initiative that predates the pandemic — has now been pushed back, from the end of this year to the end of March.

Insurers say they are now back manning their boxes, dispatching a mix of junior and senior underwriters. The Lloyd’s Market Association, their trade body, is encouraging underwriters in a given sector, such as credit risk, to pledge they will be on the floor on certain days to give brokers more reason to come in. MS Amlin’s Carrier said the insurer was now “operating a hybrid model with a fluid combination of senior and junior teams from all insurance and reinsurance classes being available and present either at the box in Lloyd’s, in our office or at home”.

Leaders of both broking and underwriting firms describe a “chicken and egg” situation, with each waiting for the other side to commit larger numbers to the underwriting room.

The relatively small number who have so far migrated back reflects how well the market adapted during the UK’s repeated lockdowns.

Negotiations between underwriters and brokers switched to video calls. Electronic execution sped up, reflected by greater usage of PPL, a digital platform for insurance transactions. While the market took a £6bn hit from Covid due to business interruption and other payouts, it swung back to a profit in the first half of 2021.

The chief executive of another Lloyd’s insurer was more downbeat on the prospects for the room, saying some of the firm’s senior underwriters preferred working practices introduced during the pandemic, including direct video communication to key brokers.

“Do you want a bunch of our underwriters sitting in the room catching passing traffic?” said the executive.

Senior brokers say a lack of underwriters of the same rank weakens the case for going in. “People won’t return to the room unless the decision makers are in the room,” said Alastair Swift, head of global lines of business for risk and broking at Willis Towers Watson.

He thinks the days of the old underwriting room are “done”. Barnaby Rugge-Price, chair of insurance broker Howden Broking, said the room “can only be relevant if the syndicates can field lead underwriters with significant authority to set terms and negotiate in the moment”.

Neal said that in September he “got a little bit strident” on the seniority of employees coming in. “Everyone was telling me it is the seniors that are coming into London, and it wasn’t,” he said, insisting that the picture has since improved.

As a result of the larger number of deals struck remotely during the pandemic, Neal predicts more firms will push for deeper changes to the underwriting room. The boxes on the building’s ground floor could be replaced with a space that is more directed at informal “serendipitous” meetings, broadcasting and events, he reckons. Elsewhere, he envisions investment in technology that will allow a mix of face-to-face and virtual trading.

“I think if you are going to re-represent the underwriting room, it has to be fundamental change,” he said. “Do we have to continue to have underwriting boxes occupying the ground floor? The voice in your head is screaming, ‘Why would you do that?’”

Radical change, however, will not be welcomed by everyone.

Emma Woolley, chief executive of insurer Lancashire’s business in Lloyd’s, is among those warning against the dangers of losing the value that the underwriting room holds.

“It’s the fact that brokers can come in and see multiple people and get really complex risks discussed and placed,” she said. “I still think that is an efficient place to do business, rather than reams of information going back and forth over emails, trying to get everyone on a Zoom call.”

She added: “If we are committed to Lloyd’s, then we have to make a concerted effort to get back.”

‘We were bussed out because we were brown’: The Southall kids sent to schools miles from home because of the colour of their skin