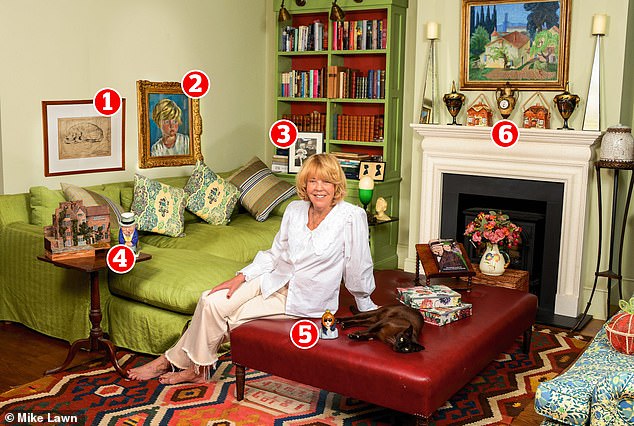 My haven, Emma Soames: The writer and granddaughter of Sir Winston Churchill, 72, in the sitting room of her home in west London

By Angela Wintle For Weekend Magazine

I treasure this drawing of one of my grandfather Winston Churchill’s cats. It’s by William Nicholson who gave him art lessons in the 1930s at Chartwell, my grandparents’ country house in Kent. He loved animals.

There was always a marmalade cat called Jock at Chartwell, along with a budgerigar and a bad-tempered poodle. When the National Trust acquired the house, the Churchill family stipulated that there should always be a ‘Jock’ in residence. The current resident is Jock VII.

Mary, my mother, hated having this portrait painted by Neville Lewis when she was four. He said she was the most obstinate child he’d met.

She started writing a diary, aged 16, in 1939, shortly before her father became PM, and captured what it was like to be a young woman in wartime. She was in the Auxiliary Territorial Service and twice served as Churchill’s aide-de-camp.

My grandfather loved babies, as you can tell from this photo of me sitting on his lap, aged three, in 1952. It was taken at Chartwell Farm, where I was born, which was next to his house.

I saw a lot of him, although I thought of him as Grandpapa rather than as the greatest living Englishman. That came later. He wasn’t an active grandfather, although he did like me and my siblings playing at his feet. 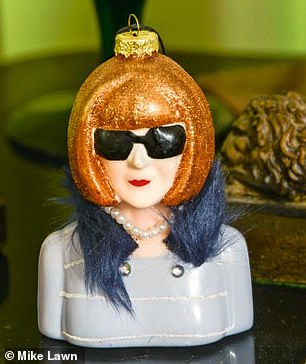 I’ve always liked this Spode Toby jug of my grandfather – I think that it captures his dogged personality. The charming matchstick model of Chartwell, sitting next to it, was given to him.

He was the heart of the house, even when he was old and frail. Everything revolved around him and his happiness. He loved Chartwell and bought it without telling my grandmother Clementine, which was naughty.

He built many of the walls in the garden and designed waterworks for the goldfish pond. I loved watching him feed the goldfish.

I’ve been a friend of Anna Wintour, editor-in-chief of Vogue in the US, for decades. This Christmas tree decoration of her is spot on. We met in our 20s when we were both fashion assistants on magazines.

She’s my role model: the most powerful woman in fashion. She’s also a loyal friend, and great fun. She has acquired her fearsome reputation because she’s so focused, but she doesn’t drop her friends.

When my father, Christopher, was made Ambassador to France in 1968, we moved to the British Embassy in Paris. The French adored my mother because she was the daughter of Churchill, and my father charmed President de Gaulle.

The French couture houses were falling over themselves to dress me, but all I wanted to wear was Biba. The French, mostly swathed in Givenchy, thought it terribly cute. I bought these china houses [right] at Biba for my mother one Christmas. She loved them, though they were more my taste than hers.

London property: London’s smallest house that looks like it was built for dolls