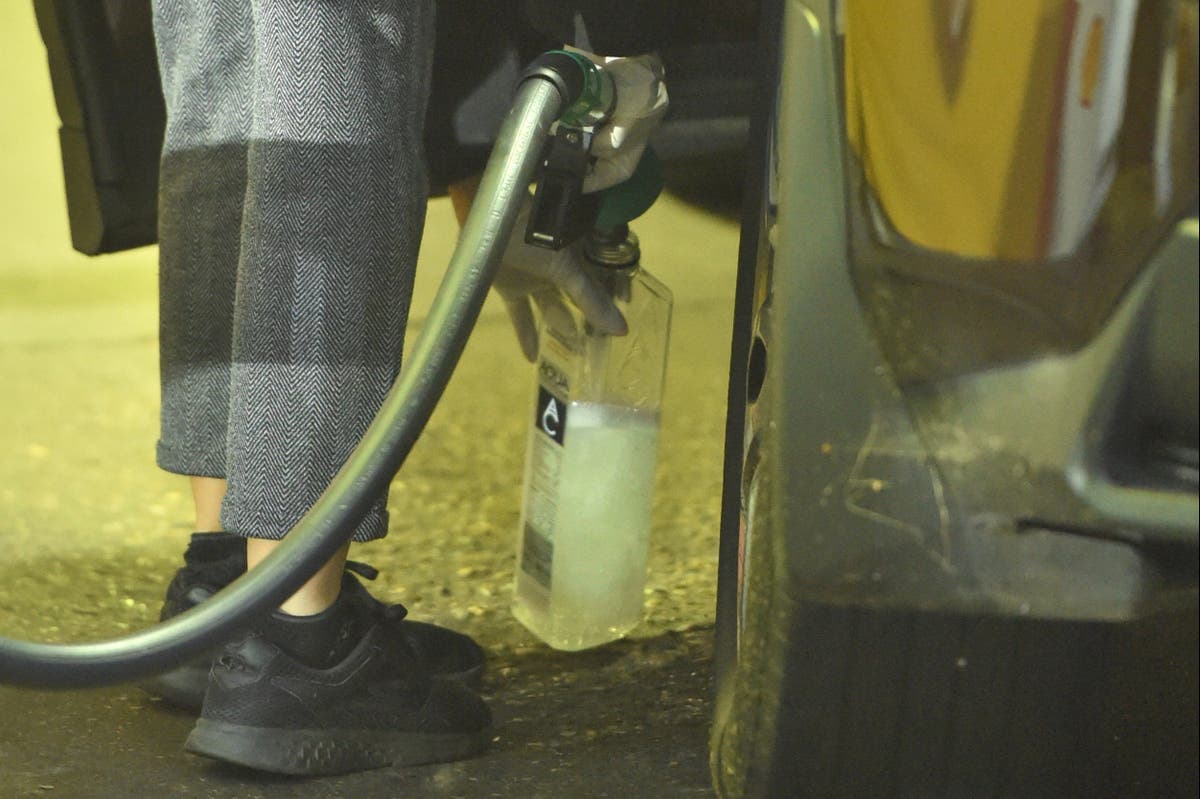 In one extraordinary scene, a woman was seen filling six plastic water bottles and an empty juice carton with fuel before going on to top up her Lexus SUV. Using the doors to mask her activity from Shell attendants, she loaded the filled bottles onto her back seat in Bayswater Road, Kensington, next to Hyde Park, at 8am.

Queues once again built up outside filling stations across London from the early hours with tempers boiling over after almost a week of chaos.

Former Brexit party leader Nigel Farage claims his vehicle was hit by a van as he went on a futile hunt for fuel.

The GB News host wrote on Twitter: “The Government tell us that the fuel crisis is easing… I went to seven petrol stations this morning and there was no fuel at any of them. Was then hit by a van whilst stationary at a roundabout. Great start to the day!”

The crisis has been caused by the severe shortage of HGV drivers to make deliveries compounded by a wave of panic buying that started last Friday.

The Government has put soldiers on standby to drive tankers and today Deputy Prime Minister Dominic Raab even suggested that low-level offenders could be drafted in to help firms with severe staff shortages as part of their rehabilitation.

The motorist fills up the plastic bottle with petrol.

Mr Raab told The Spectator: “We’ve been getting prisoners and offenders to do volunteering and unpaid work. Why not if there are shortages encourage them to do paid work where there’s a benefit for the economy, benefit for society? If you give them some hope, they’re much less likely to reoffend.”

Industry bosses said the situation was slowly easing outside London but admitted the capital had the worst shortages.

The motorist used car doors to mask her activity

Gordon Balmer, executive director of the Petrol Retailers Association, said the percentage of forecourts that were completely dry had fallen from 37 per cent to 27 per cent yesterday nationally but conceded there were “still lots of sites out of fuel in London”.

Ministers once again took to the airways this morning to insist that the situation was getting better. But Simon Clarke, chief secretary to the Treasury, told BBC Radio 4’s Today Programme: “The situation is fundamentally improving. If people return to normal buying habits of fuel then things will quickly regularise themselves.

“There is now more fuel being delivered to petrol stations than is being sold… The number of petrol stations which don’t have fuel has fallen from 60 per cent at the weekend to 27 per cent yesterday, so that trajectory is really positive.

We are confident that things will normalise really quickly if we can just avoid the panic buying which has exacerbated this situation.”

Sir Keir Starmer said that Brexit was a “contributing factor” to the shortages.

He told BBC Radio 4’s Today programme: “Whether you voted to leave or remain, it was obvious that if we were to leave the EU we would have less HGV drivers than we would otherwise have. I think the British public should be angry and frustrated. This is a total lack of planning. It was predicted and predictable.”