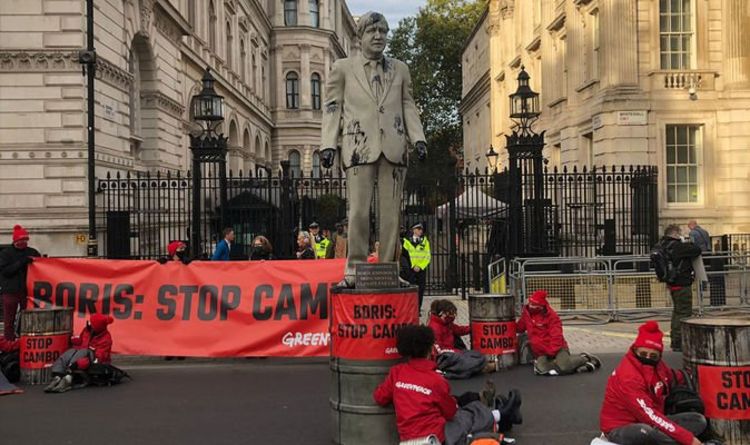 The Met Police said in a statement: “We are on scene at a protest outside Downing Street, Whitehall which is blocking part of the road.

“A number of activists have locked themselves to barrels in order to frustrate our response. Specialist units are on scene and cordons are in place. We’ll share updates soon.”

BP was granted a permit to develop the Vorlich oilfield off the east coast of Scotland.

Greenpeace had criticised the Government’s decision to allow the field to go ahead.

Ahead of the COP26 summit, they said the oilfield was a win for the fossil fuel industry.

Greenpeace also said the oilfield is not compatible with the Government’s agenda ahead of the summit in Glasgow.

Greenpeace had launched legal action in Scotland’s Court of Session against the oilfield.

However, the permit for the oilfield was deemed lawful by a panel of judges.

Industry body OGUK described the judgement as a victory for common sense and for the UK’s energy security.

Sustainability director Mike Tholen said: “If Greenpeace had won, it would have generated uncertainty among the hundreds of companies involved in producing the nation’s oil and gas.

He said: “The world – this precious blue sphere with its eggshell crust and wisp of an atmosphere – is not some indestructible toy, some bouncy plastic romper room against which we can hurl ourselves to our heart’s content,” the prime minister said.

“Daily, weekly, we are doing such irreversible damage that long before a million years are up, we will have made this beautiful planet effectively uninhabitable – not just for us but for many other species.

“And that is why the Glasgow COP26 summit is the turning point for humanity.”

Members of the Royal Family will also attend the summit.

The Queen will travel to Glasgow where she will be joined by the Prince of Wales and the Duchess of Cornwall, and the Duke and Duchess of Cambridge.

Bob Ward, spokesman for the Grantham Research Institute on Climate Change and the Environment at the London School of Economics, told the Daily Telegraph: “Prince Charles, and increasingly Prince William, have shown a particular interest in this area.

“Prince Charles is definitely recognised around the world as a deep thinker on these issues, and having a track record of having been interested in this for a long, long time.

“So it’s not just the symbolism – they are people of substance on these issues.”