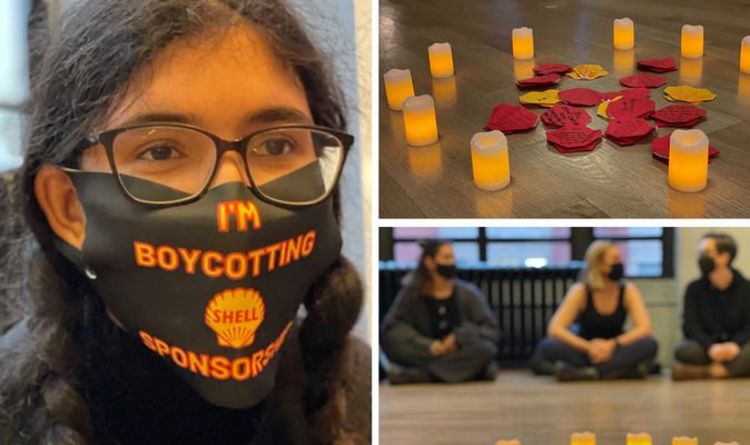 Activists from the UK Student Climate Network (UKSCN) confirmed they were holding a vigil inside the museum for the “victims of the climate crisis”. It said they were protesting against its links to fossil fuel companies.

It was claimed that two police officers were in attendance.

As news of the protest emerged the UKSCN tweeted a picture outside the museum.

It wrote: “RIGHT NOW a vigil is also taking place outside the @sciencemuseum!

“Join us and show solidarity to all the people who have been harmed by Shell and to the comrades protesting inside!”

The protests came after the museum announced a new gallery called Energy Revolution which will be sponsored by a subsidiary of the Adani Group.

Adani is a conglomerate with major holdings in coal, the most polluting fossil fuel.

News about The Adani Green Energy Gallery, which is set to open in 2023, was criticised by many environmental activists.

The museum has also been slammed over sponsorship deals with oil and gas giants Shell, BP and Equinor.

But it has defended the move saying the gallery “will explore the latest climate science and the energy revolution needed to cut global dependence on fossil fuels.”

Dame Mary Archer, chair of the Science Museum Group, said: “This gallery will take a truly global perspective on the world’s most urgent challenge.

A spokesman for the Met Police said: “At approximately 17:40hrs on Tuesday, 26 October, police were made aware of a protest inside and outside a museum on Exhibition Road, SW7.

“Officers remain in attendance and are engaging with the protestors.