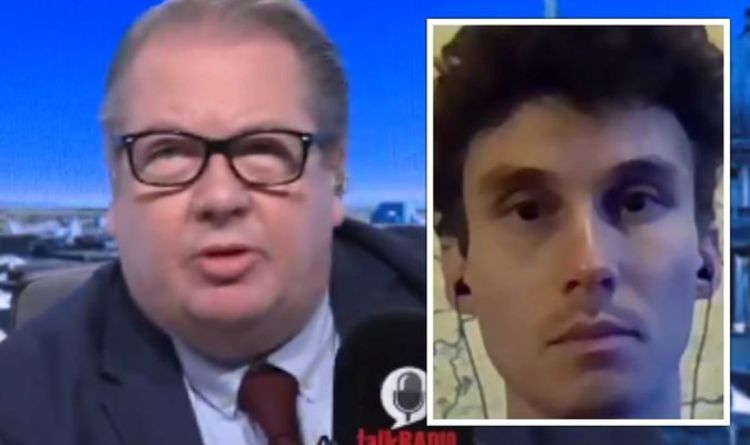 TalkRADIO presenter Mike Graham clashed with Insulate Britain spokesperson Cameron Ford during an awkward interaction live on radio. Mr Graham grilled the climate change activist about what he does for a living with Mr Ford revealing he was a carpenter with the radio presenter pointing out cutting down trees was not that environmentally friendly. Mr Graham also claimed concrete could be grown with Mr Ford sitting in silence before being cut off after only appearing for a minute.

Appearing on TalkRADIO, Mr Ford was invited to discuss Insulate Britain’s protest following their demonstration in London this week.

Mr Graham jokingly asked Mr Ford what he was glued to after protesters stuck themselves to the road to avoid being moved on.

The activist replied he was “unfortunately” glued to his screen with Mr Graham then asked what Mr Ford did for a living.

He revealed he was a carpenter with Mr Graham asking how environmentally friendly that job was.

Mr Ford said he worked with timber and said it was more sustainable than concrete with the radio host pointing out he works in an industry that cuts down trees.

A blank-faced Mr Ford said wood was regenerative rather than things like concrete.

The activist then stared at the camera as dead air filled the TalkRADIO airwaves with Mr Graham cutting off the activist and moving on.

Mr Graham remarked: “I don’t think I ever want to talk to those people.”

However, the radio host was also attacked after some listeners were confused over his statement about concrete.

Mr Ford told Mr Graham timber was more sustainable because you could grow it but the TalkRADIO presenter said you could “grow all sorts of things”.

The activist said you could not grow concrete with Mr Graham saying you could.

Listeners sided with Mr Ford instead and chose to ridicule Mr Graham for his comments.

Some posted pictures of concrete slabs and joked they were “plants” that needed harvesting.

Climate change campaigner Dale Vince tweeted about the clip and said: “Talking with Mike is always fun. He does have a tendency to let his desire to argue (and find fault) get in the way of facts.

“In this case the fact there is no such thing as a concrete tree.”

Former Labour MEP Sebastian Dance also joined in, writing on Twitter: “I’m off to tend to my concrete borders. Got to plant new concrete bulbs for the spring.”

A nationwide injunction was granted against Insulate Britain following weeks of disruption and protests on the UK’s roads.

On Monday, dozens of Insulate Britain protesters were arrested after activists protested at three locations across London.

Metropolitan Police revealed 53 people had been arrested as the climate change group carried out its 14th protest on the roads.

Activists used super glue to attach themselves to the roads to prevent police from moving them on.

Transport Secretary Grant Shapps said: “We are making use of every avenue of existing law to try to prevent the continued life-endangering action being carried out by Insulate Britain, which is causing intolerable disruption to motorists’ lives and livelihoods.”

Insulate Britain came under fire after it was revealed one of their members did not insulate their own home which caused the activist to walk off ITV’s Good Morning Britain.

Liam Norton also bizarrely told TalkRADIO he was a “hypocrite” and did not care about climate change during an awkward exchange.

He also accused radio host Cristo Foufas of “appeasing” Adolf Hitler because of his opposition to Insulate Britain.