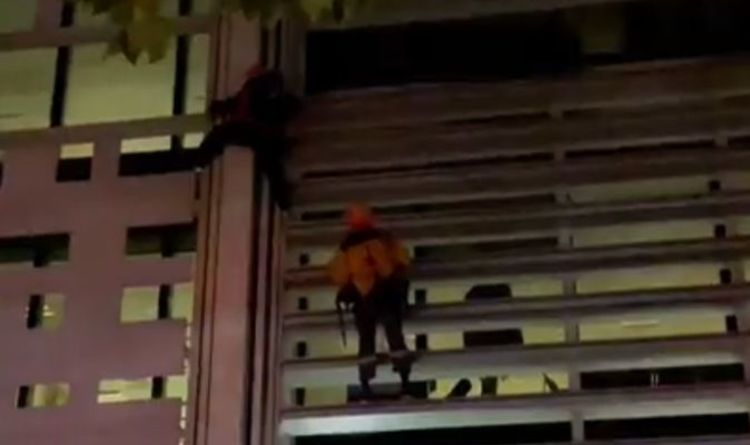 The protestors have climbed the outside of the building shared with the Department for Environment, Food and Rural Affairs (DEFRA) and are set to drop a banner “demanding that the world wake up and switch to a fully plant-based diet”. Police, Fire Brigade and Ambulance Service are all on the scene. Animal Rebellion posted a picture of protestors scaling the building.

“The protestors have said that they will take action until the Government defunds meat and subsidises a plant-based transition.

“Meat and Dairy is one of the leading producers of greenhouse gases and causes 90 percent of Amazon deforestation.

“World leaders at cannot talk about meeting the Paris Climate targets and securing global net zero without addressing that our food system is destroying our planet.”

Sky News script assistant Matt Grant posted a picture of protestors scaling the walls of the buidling, and wrote: “Police, Fire Brigade and Ambulance Service are all on the scene.

“The protestors plan on dropping a banner ‘demanding, that the world wake up and switch to a fully plant-based diet’.”

Mr Grant added in another tweet: “The group are Animal Rebellion.

“The climbers have moved to the above the main entrance to the Home Office, and intend to drop a banner.”

Sky News political correspondent Tamara Cohen also tweeted a picture of protestors scaling the walls of the building in the capital.

She wrote: “Scenes at the Home Office just after 6am as animal rights protestors scaled the walls.

“We understand they are from Animal Rebellion and told our reporter: ‘Ahead of COP26 we are calling for – no, demanding – that the world wake up and switch to a fully plant-based diet’.

Sky News broadcaster Kay Burley posted a video of protesters climbing the walls of the building in London.

She wrote: “Animal rights protestors taking their protest to the Home Office this morning.

“Via my brilliant colleagues Matt and Fergus and their iPhones.”

The Metropolitan Police said they were at the scene with the London Fire Brigade and so far, no arrests had been made.

A spokesperson said: “Police were called at 06:09hrs on Tuesday, 26 October following reports that a number of protesters had scaled a government building in Marsham Street SW1.

“Officers are on scene with the London Fire Brigade. There have been no arrests at this time.”

Channel 4 Grand Designs: Kevin McCloud’s life off camera from net worth to marriage that ended after 23 years