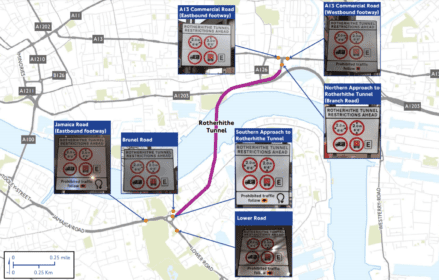 TfL reinvests all of the money it gets through fines into London’s transport network, not just Rotherhithe Tunnel itself, which is in urgent need of repairs.

Drivers paid out a whopping £5 million in fines for taking the wrong kinds of vehicles through the Rotherhithe Tunnel in the first eight months of the year, new figures show.

Transport for London (TfL) handed out some 75,387 fines to drivers who broke restrictions on the 113-year-old tunnel from the start of January to the end of August. Each penalty charge notice is £130, but if you pay within two weeks the charge drops to £65.

Assuming everyone who was fined paid quickly enough to qualify for the lower charge, TfL would have raked in about £4.9m. It’s unlikely that every driver paid up within two weeks, so the real amount the transport agency made is probably above £5m.

Fines started out at about 1,000 per week in early January, before growing steadily and plateauing at between 2,000 and 3,000 fines per week from mid-February until the end of August.

Rotherhithe Tunnel ‘could be closed’ without £120m repairs

Khan’s office said that all of the money that comes in through fines is reinvested into London’s transport network, not just the tunnel itself, which is in urgent need of repairs.

Pidgeon, who chairs the London Assembly’s transport committee, told the News: “With 76,000 Penalty Charge Notices awarded in the first eight months of this year, at least £5 million in fines, there is no doubt this is a useful income stream for TfL.

“However the real challenge is not merely catching people who have driven through the tunnel in a vehicle that is too wide or too heavy, but instead ensuring greater compliance with the safety restrictions.

“TfL needs to ensure that there is a full review of the signage and information given to drivers on all approach roads to the Rotherhithe Tunnel. The message that only certain vehicles can go through the Tunnel needs to be made crystal clear to motorists many miles before they reach the tunnel.”

Signs at approaches to Rotherhithe tunnel

There are seven sets of signs warning drivers about the restrictions close to the Thames-crossing tunnel – at the Rotherhithe end, eastbound on Jamaica Road, northbound on Lower Road, westbound on Brunel Road and at the approach to the tunnel itself.

Carl Eddleston, TfL’s head of asset operations, said: “The restrictions at the Rotherhithe Tunnel are absolutely vital to ensuring the safety of people travelling through it and we want everybody to be fully aware of these.

“We’d much rather people follow the rules than face fines, and the signs at the tunnel entrances clearly list the full set of restrictions in place, complying with Department for Transport rules governing road signs.

“We expect drivers to follow signage and be aware of the rules of the road at all times and will keep the issue under review to ensure that the tunnel remains safe for everyone.” 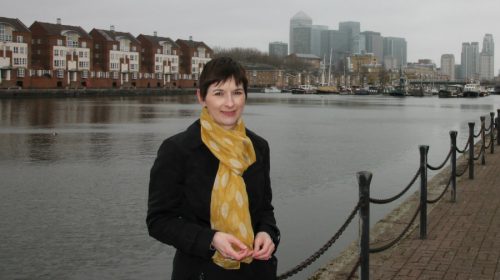 At the northern end in Limehouse there are signs both eastbound and westbound on Commercial Road and at the approach to the tunnel itself.

The tunnel was built in 1908 and “was not designed to cope with modern levels of traffic,” TfL says on its website.

Only vehicles less than two metres high and wide and weighing below two tonnes are allowed to drive through the tunnel. Since December 2019 drivers are not limited to one fine per day for breaking this rule. TfL says drivers whose vehicles don’t meet these standards should cross the river at Tower Bridge or the Blackwall Tunnel.

The news comes after a senior TfL executive said that the Rotherhithe Tunnel might need to close if it didn’t get a £120 million renovation.

Gareth Powell, managing director for surface transport at TfL, told the London Assembly’s transport committee in July that the tunnel is the river crossing most in need of repair, followed by Vauxhall Bridge.

He added that TfL has “a very advanced plan being developed” to make the changes, but that the transport agency needs long-term government guarantees over funding to carry out the project – whose cost he estimated at £120m.

A spokesperson for TfL said this week that there is no fixed date before which the tunnel would otherwise have to close, although the tunnel still needs urgent repairs to keep it open and safe in the long term.

Putting off the works means it would cost more to maintain and run the tunnel and the likelihood of closures will also increase year-on-year, as the operating systems become less reliable and more difficult to repair.

TfL’s next government funding agreement will be settled in December.