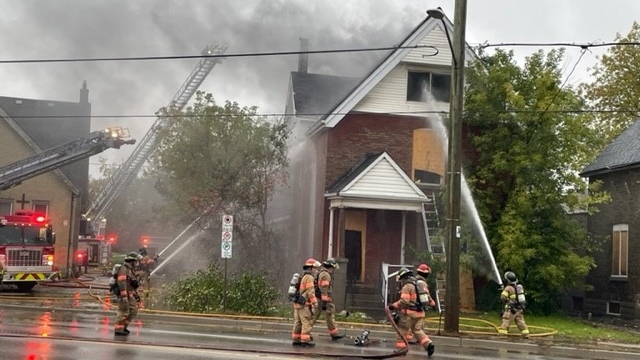 Firefighters had to create upper-level vent holes to help exhaust heavy smoke from the structure at 254 Hamilton Rd.

They were called to the location, just east of Adelaide Street, at around 11:30 a.m. Monday.

When they arrived, the whole home was in flames.

Crews poured water on the structure to contain the blaze, which had a church on one side and homes on the other sides.

Hamilton was closed from Dreany Avenue to Inkerman Street while firefighters dealt with the fire.

Officials say the building has been empty for a number of years, but fires at the location have been an ongoing problem.

Neighbours say people are frequently breaking into the structure.

Fire officials say no one was inside when they arrived and there were no reported injuries.

Still, having boards on doors and windows created challenges for crews.

“It’s also boarded up so it’s difficult access for the crews to get inside and if they are inside, to work safely,” said Platoon Chief Dave Hood.

He says construction of the building was also problematic, “It’s probably balloon construction. So we have problems, the fire can travel from the basement to the top floor in no time because there’s no fire-stops.”

Fire and police remained on the scene late Monday afternoon. A cause has not been identified.