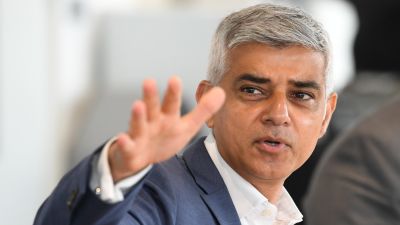 Tap above to watch The Late Debate with Simon Harris

London Mayor Sadiq Khan has said he would have “thought twice” about running for office had he known about the level of violence and abuse being aimed at politicians.

The Labour mayor made the comments following the killing of Sir David Amess MP, who was stabbed to death at his constituency surgery last Friday.

Ali Harbi Ali, 25, from north London, has been charged with his murder and the preparation of terrorism acts. He appeared at Westminster Magistrates Court on Thursday afternoon.

The killing has raised questions over whether enough is being done to protect MPs and politicians, particularly when meeting people in their constituency.

Flowers left at a church in Essex for Sir David Amess

Sadiq Khan, who was first elected as the Mayor of London in 2016 and was previously the Tooting MP, says he is worried violence and abuse will stop people entering politics.

He told ITV News London’s The Late Debate: “It’s not why I came into politics to receive police security, though I understand the advice from the experts. My worry is it may deter others from becoming a politician because – why would you?

“Had I known when I first embarked on a career being a public servant that it would involve this level of threat and protection, I’d have thought twice.”

Sir David Amess is the second MP to be killed in the last five years, following the murder of Jo Cox in July 2016.

Police forces across the country have been contacting politicians this week to discuss security in their constituencies.

Some MPs have called for more uniformed officers at surgeries, as well as when campaigning during elections.

Mr Khan added: “What is great about our democracy is whether you’re the mayor, or a MP, or a councillor you get to see constituents all the time. You mix and mingle.

“I can’t decide to go and see my mum in the spur of the moment because the police need to be there in advance to make sure it’s safe.”

The Conservative MP Andrew Rosindell said MPs should stop advertising their locations on social media, but acknowledged that it is important politicians engage with constituents.

The Romford MP said: “I certainly think MPs should refrain from advertising their whereabouts in advance on social media The community is different advertise in the traditional way, put leaflets through doors.

“It’s hard work but at the end of the day I like to old traditional way of campaigning.”

You can watch ‘The Late Debate’ on ITV in London on Thursday October 21st at 10:45pm