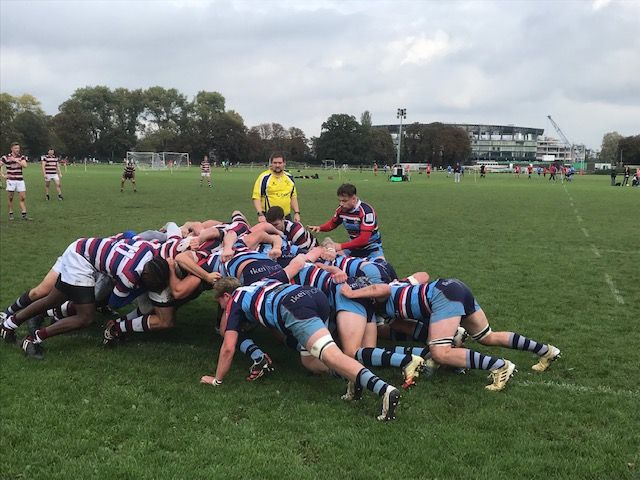 Reeds Weybridge in their 129-0 win over London Exiles.

Submitted for publication in the Surrey Advertiser

Reeds Weybridge were huge 129-0 winners away to London Exiles on Saturday.

Exiles haven’t played a league game this season and two of the fixtures have been opposition ‘walk overs’ before Reeds claimed 19 tries in the win.

The first scrum of the game was an indication of events to come.

Reeds generated an enormous shove that had the Exiles pack shunted back. Reeds were halted for a sideways shove, but the Exiles pack knew they were in for a torrid afternoon.

Reeds’ dominance up front provided the platform for possession, allowing the half backs to orchestrate a series of attacks which stretched the Exiles cover to breaking point.

The first try of the afternoon went to winger Joe Moriarty, his combination of trickery and speed left the defence flat-footed, and he had five tries to his name before half-time.

With just a quarter of the game gone there were half a dozen tries on the board and the result was already decided. Reeds went through a series of practised attacks that clocked up ten tries at the break.

The Exiles put in a brave performance, but they were outgunned in all departments.

On the rare occasions they did get their hands on the ball they found themselves under some relentless pressure at the breakdowns.

This allowed Reeds to fire the ball around the park, and Reeds have fit players who have the pace and skills to turn possession into points.

There were 19 tries in total, with winger Dan Veale and flanker Joe Wastie collecting hat-tricks for the side from Weybridge, Surrey.

The Surrey Advertiser covers areas including but not limited to Guildford, Cranleigh, Godalming, Woking, and Elmbridge in Surrey.