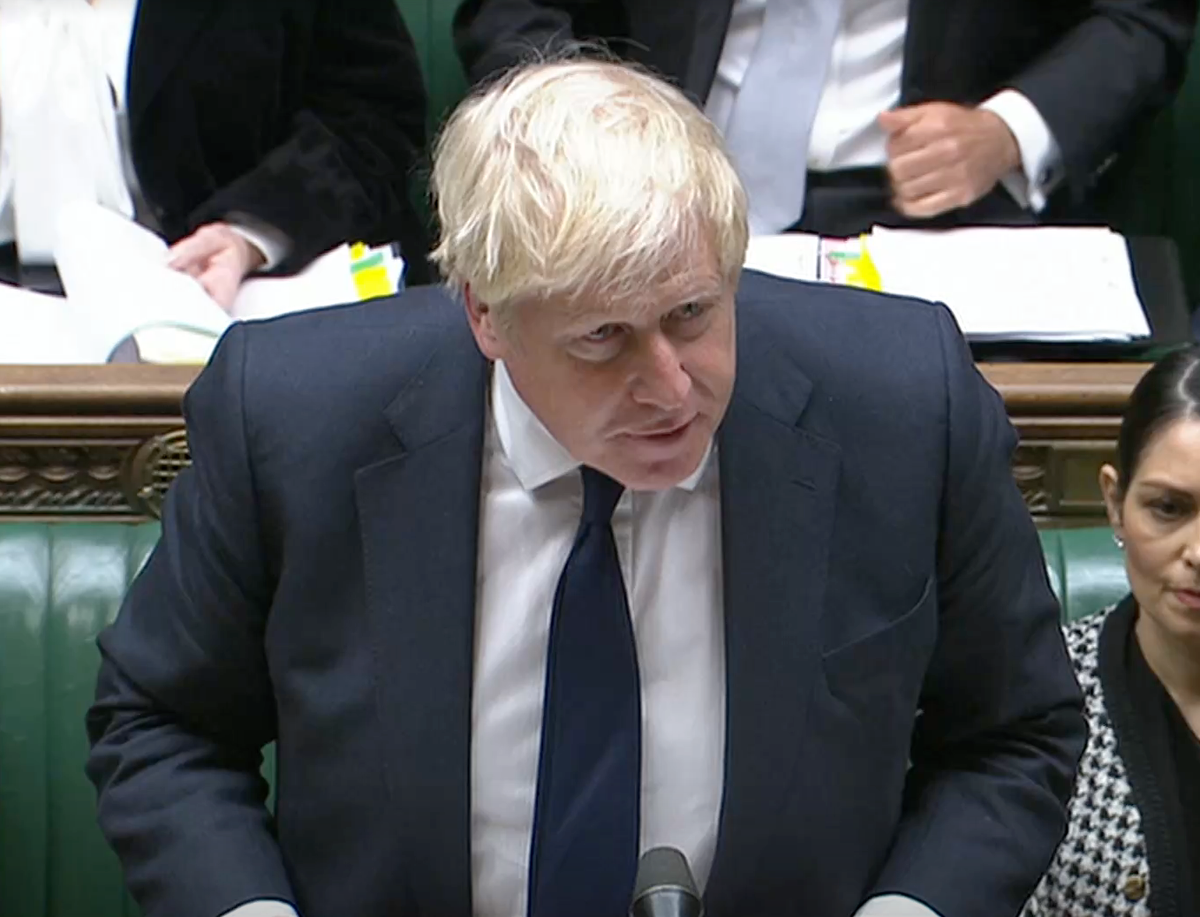 Boris Johnson and Sir Keir Starmer are going head-to-head in this week’s Prime Minister’s Questions (PMQs), with the Opposition leader expected to focus on the government’s refusal to enforce ‘Plan B’ Covid restrictions recommended by the NHS.

After PMQs there will be an urgent question in the Commons, from Labour’s Harriet Harman, on sexual misconduct in the Met police.

The session follows Russian president Vladimir Putin announcing he will not attend the upcoming Cop26 climate summit in Glasgow, in a major blow to Mr Johnson’s hopes of getting global leaders to commit to an ambitious deal to keep global warming below 1.5C. It comes amid widespread expectation that Chinese president Xi Jinping will also not travel to Scotland for the crucial gathering, beginning on 31 October.

Meanwhile, business secretary Kwasi Kwarteng admitted earlier the UK’s cost of living remains a “real cause of some concern” in the government.

It came after the latest Consumer Prices Index figures showed the rise in the cost of living fell to 3.1 per cent in the year to September – down only slightly from 3.2 per cent in August. However, the inflation figure remains far above the Bank of England’s target rate of 2 per cent.

Vote on Online Safety Bill to come before Christmas – PM

Boris Johnson has committed to a second reading of the Tories’ Online Safety Bill before Christmas, following a question by Sir Keir Starmer.

Starmer said the Bill is not before the House yet and cited examples of violent material not being removed by social media companies, including instances of abuse on the app Telegram while MPs gave tributes to murdered MP Sir David Amess on Monday.

The Labour leader said if the PM brings the Bill forward, his party will suport it.

The PM welcomes Starmer’s comments. He says the bill will toughen up laws for social media companies and commits to a vote before Christmas.

PMQs begins with question on safety of women

The first PMQs since party conferences has begun in the Commons.

Labour MP Rachael Maskell asks about Sir David Amess and James Brokenshire, saying both MPs served the public well before they died. She also asks about the lack of confidence women have in the police, citing the Met’s “flag down a bus” advice.

Boris Johnson says this is “one of the most important the country faces”. Women should feel confident in the police, he says, adding the government is investing in more police and better street lighting.

But it is also important that men are prosecuted, that the CPS secures convictions and that sentences are tough, “which this side of the house believes in,” Mr Johnson adds.

You can watch it live here:

Boris Johnson’s government has been urged to change course over its support for new oil drilling in Surrey or risk “hypocrisy” at the crucial Cop26 climate conference.

The government is set to defend in court a decision by Surrey Council to grant planning permission for six oil wells only a few days after the crucial international summit in Glasgow end next month, writes Adam Forrest.

However, Liberal Democrat leader Ed Davey has written to Cop26 president Alok Sharma, urging him to push for the drilling application to be called in and refused.

In a letter shared with The Independent, Mr Davey wrote: “This new oil field is the equivalent to ministerial colleagues breaking your cricket bat just as you walk out to the crease at Cop26.”

Sharma to take Cop26 questions in Commons at 11.30am

Alok Sharma, the president of Cop26, is due to take questions on the summit in the Commons within the next 10 minutes.

It is highly likely he will be quizzed about why Russian president Vladimir Putin has just confirmed he will not be attending.

Confirmation from the Kremlin of Mr Putin’s snub comes amid widespread expectation that Chinese president Xi Jinping will also not travel to Glasgow for the crucial gathering, at which Boris Johnson hopes to seal an ambitious deal to keep global warming below 1.5C above pre-industrial levels and to provide $100bn a year to assist less developed countries prepare.

There are fears in London that the absence of key power players from the two-week summit, beginning in 11 days’ time, will make it more difficult to get agreement on thorny issues like stepping up reductions in greenhouse gas emissions and switching from polluting fossil fuels to greener sources of energy.

In a serious blow to Boris Johnson’s hopes of getting global agreement to a significant climate change deal, Russian president Vladimir Putin has announced he will not attend next month’s United Nations Cop26 summit hosted by the prime minister in Glasgow.

Russian president Vladimir Putin has announced he will not attend the UN Cop26 summit hosted by Boris Johnson in Glasgow, the BBC reports.

It comes as a serious blow to the PM who hoped to get global agreement to a significant climate change deal.

Following my last post, the government is being urged to tack action after reports surfaced of women being “scared” to go clubbing as police investigate allegations of spiking via injection.

Nightclub boycotts are planned across UK cities next week as students call for tighter security in nightclubs amid reports of women being attacked with needles, reports Zoe Tidman.

Zara Owen, 19, told The Independent she woke up after a night out in Nottingham last week with a “sharp, agonising pain” in her leg, a limp and no memory after a certain point. She later found a “pinprick” on her leg and pressed it, triggering a shooting pain.

An ex-Nottinghamshire Police chief constable has criticised the government, specifically Boris Johnson, for refusing to classify misogyny as a hate crime.

It comes after the PM said at the Tory conference police officers were “too busy” to make the change, citing forces still being stretched amid the pandemic.

Asked about the refusal on Sky News today, Sue Fish said the “police are there to protect every section of the population, not just men”.

“This is endemic, both in policing and in society, and the police are there to protect. For the PM to say ‘no, I don’t think it is really important’… how appalling is that, that he condemns 50 per cent of the population to being not worthy of police protection?”

‘The City was burned by Brexit, now Boris Johnson wants it to pay for net zero’

In case you missed this week’s Global Investment Summit, our economics editor Anna Isaac has an analysis of what went down at the two-day event.

Global Britain wants global investors’ money, and it isn’t mincing its words. Summits, at which the government seeks to woo the world’s financial elite, always need a number. The UK got one: £.9.7bn – some was new, some had already been announced.

But there was a gap between the reality and rhetoric that went beyond grouping deals for a press release at Tuesday’s Global Investment Summit, held at the Science Museum in London. When the prime minister took to the stage, he asked for trillions, and he was getting billions.

“I am given to understand that there is $24 trillion represented in this room, and so I want to say to each and every one of those dollars you are welcome to the UK and you have come to the right place at the right time,” Mr Johnson said.

The crowd, which included chiefs from a host of the world’s largest investment banks and asset managers, was entertained, but it isn’t adding zeros to its cheques quite yet. The UK isn’t out of the woods in terms of laying out its post-Brexit vision in the cold, hard terms investors need: that means a clear and consistent message on regulation and tax, one investor who attended the summit told The Independent.

London agents hit with more and larger fines by local…