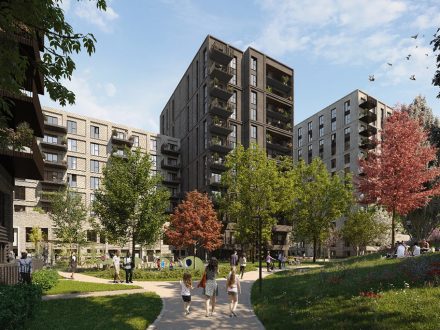 The third stage of a £500m regeneration project in east London has received the go-ahead.

The next phase of the Blackwall Reach development will add an extra 315 homes to the 340 homes already delivered in phases 1a and 1b of the scheme and a further 268, which are currently being constructed as part of phase two. The third stage will also include a cafe, gym and almost three acres of green space.

In total, the scheme, which is being led by the Swan Housing Association in partnership with the London Borough of Tower Hamlets and the Greater London Authority, is set to replace 252 homes with 1,575 homes, half of which will be affordable housing.

The London Borough of Tower Hamlets and the Homes & Communities Agency first started to look for a contractor to deliver the first phases of the scheme in 2009, and recruited Hill Group to construct 242 mixed-tenure homes for the first phase.

Swan Housing chief executive John Synnuck said: “Phase three will cement Blackwall Reach’s position as one of the most significant transformative regeneration projects in London. As well as more than 300 new homes, it will bring the preservation and enhancement of such high-quality public space in the city, which is so essential in a post-COVID world.”

The scheme is not the only major regeneration to move forwards in the capital. In April, Willmott Dixon landed a £135m estate regeneration job in Barking, and will deliver 382 homes to the area in east London.

Earlier this month, Morgan Sindall was chosen to deliver the of a first phase of an 800-home scheme in Newham, also in east London.

Justification for MPs having second jobs hard to fathom