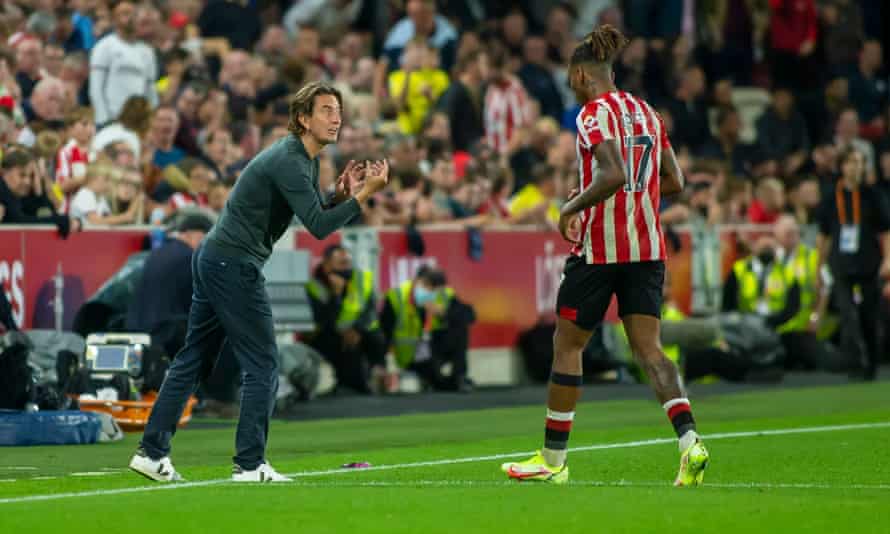 Early in 2015, the Brentford co-director of football Phil Giles collected three German visitors from Heathrow airport. He drove them to Kentish Town, in north London, where the club’s owner, Matthew Benham, was waiting in the offices of his sports modelling company, Smartodds. They received the grand tour and were impressed by how the firm’s methods influenced a football operation that, although new to England’s second tier, was starting to turn heads across the continent. Then everyone made a weekend of it: dinner, an Arsenal match at the Emirates, and parting promises to keep in touch with each other’s progress.

Both parties are firmly up to date now. The curious travellers were Thomas Tuchel, who was between appointments at Mainz and Borussia Dortmund, and two of his assistants. When Tuchel takes Chelsea to Brentford Community Stadium on Saturday evening he will see the fruit of his acquaintances’ labour at first hand. While the Premier League leaders will be favourites to press home their own case, their seventh-placed hosts have adapted to top-flight life with such enchanting confidence that a different outcome would not cause shockwaves.

“Life is good,” smiled Thomas Frank on Thursday, and he need not have said much more. Frank gives truth to the adage that a manager’s demeanour reflects the health of his team. His public appearances are fun and expansive, but never too far from a serious turn: it presents a breath of fresh air in an increasingly homogenised climate, and that is exactly what Brentford have offered. The speed and verve with which they departed the Championship have shone through in victories over Arsenal, Wolves and West Ham, not to mention the rollercoaster draw with Liverpool and respectable points at Aston Villa and Crystal Palace. But they can scrap, too, and that is what separates them from most bright-eyed newcomers: their capacity to mix things up is striking and it has often been difficult, within individual games, to anticipate exactly what is coming next.

“We want people who are not always looking at their own task, but also want to see the whole picture,” Frank said of the standards Brentford expect. “The more of those people you can get into your club, the better you are. I’m constantly speaking about hard work and performance. Culture is the most important thing I believe in, and you can destroy that in three or four weeks.”

That is why there is no backslapping around Brentford’s training ground in Osterley. Late last month, Frank laid into his players after detecting a drop-off in one of their sessions, later telling colleagues that it was among the worst he could remember. Brentford were riding a wave but the point needed making: their level must be outstanding every day, because the Premier League’s margins are so fine that any slip could be catastrophic.

Whereas outsiders predicted a relegation fight, Brentford’s in-house metrics brought up a probability of about 30% that they would go down. Even those odds are being defied now, although nobody is getting ahead of themselves. They expected to be competitive, backing the consistency they had built in consecutive third-placed Championship finishes. Only Arsenal have a younger squad so most of their players could be expected to improve. Ivan Toney, a centre-forward of rare physical and technical gifts, looked a sure bet to handle the step up; the question was who else would make a similar jump with him?

Among those to shine has been Vitaly Janelt, a 23-year-old midfielder who had only just begun playing regularly at VfL Bochum when Brentford signed him for £500,000 last year in a typically far-sighted move. He has not taken the headlines that Toney, his strike partner Bryan Mbeumo and the right wing-back Sergi Canós have attracted, but was an ever-present until sustaining a knock in the warm-up at West Ham. A six-footer, Janelt has met the Premier League’s helter-skelter head on and his dynamism has been a feature. He sits well within the top 20 successful tacklers in the division.

Janelt’s comfortable adaptation epitomises that of his team. If anything has pleasantly surprised Brentford’s hierarchy, it has been their flexibility in meeting a game’s requirements. In the Championship that was not called upon so often, but there is an acknowledgement that few can spend 90 minutes passing through Arsenal and Liverpool. Arsenal were rattled by long deliveries towards Toney and outdone by a blocking manoeuvre from a long throw. Although the goalkeeper, David Raya, would routinely play out from defence last season he has not been dissuaded from quick back-to-front transitions against teams schooled in ferocious pressing, hoping to win the second ball and pin them in their own half. Out-footballing opponents is only one part of the plan.

“We have managed to be brave and positive and try to attack teams,” Frank said. “[But] if we want to achieve anything as a newly promoted team you need to be able to defend.” Kristoffer Ajer, the £13.5m record signing from Celtic, has slotted straight into Brentford’s zonal defensive system and was viewed as a low-risk purchase despite the hefty fee. Another 23-year-old, Ajer has 25 caps for Norway and his future value seems secure.

Brentford’s players have sometimes left the pitch commenting on the league’s intensity, but they have consistently kept up. There is a sense internally they are capable of even more: that their structure has been sound and they are tough to breach, but that they could show more quality in possession. That has hardly been absent, as they showed for two-thirds of a dominant win at Molineux and in a whirlwind opening 20 minutes against West Ham, but a team that top-scored with 79 goals in the Championship are yet to turn on the taps. A tally of 10 in seven games hardly constitutes a drought but it comes as a surprise that only Norwich and Watford have taken fewer shots.

The forward Yoane Wissa, who arrived from the French club Lorient in August, has earned cult hero status with late goals against Liverpool and West Ham. Brentford’s involvement in the play-off final meant they had less time to move in the market than many of their new rivals: Michael Olise, the then-Reading midfielder, was highly fancied but Crystal Palace were able to complete his £8m purchase. Their four signings have helped move the dial but, should they stay up, a full pre-season may see their scouting methods yield greater reward.

For now, every potential advantage counts. One of them is their stadium, packed ingeniously into a tiny space just off the M4. Two nights before Arsenal’s visit, a number of Brentford’s senior staff enjoyed steak and wine in a branch of the Gaucho chain: it was a rare occasion on which Frank, Benham, Giles and his fellow co-director of football, Rasmus Ankersen, convened in the same room. In part they talked targets and transfer windows, but there was a current of boyish excitement at the prospect of opening a historic campaign in front of a first full house at the new venue.

The atmosphere exceeded expectations. It feels like a proper football ground: angular, close, acoustically almost perfect. The environment is primed for a team who want to get on top of the opposition, even if they are as decorated as Chelsea. “The best way is to try to be on the front foot: aggressive, forward-thinking and attacking,” Frank said of the west London derby. “The more we can get them running back, the better.” If it offers any solace for Tuchel, he has had six years to prepare for what is in store.