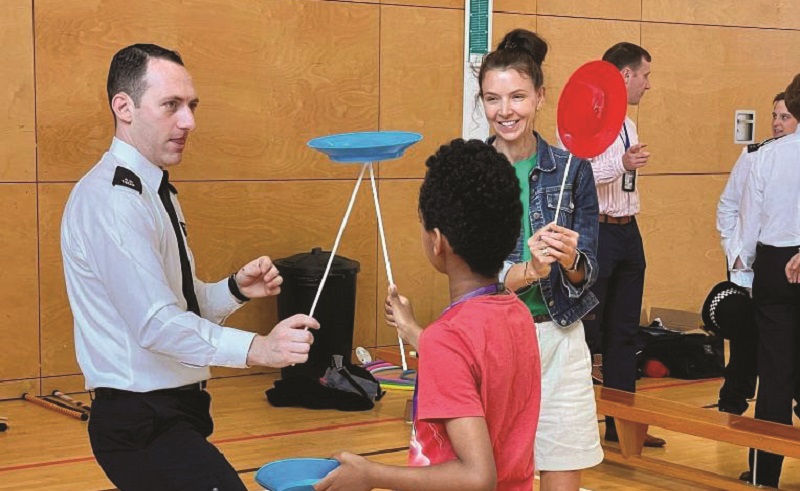 The long arm of the law is stretching into the community to teach skills and break down barriers.

That’s  because he used to be a  professional basketball player after growing up playing it on the street in Park Hill, Croydon.

He works at South Bank University Academy of Engineering in Trafalgar Road, and Ark Walworth Academy in Shorncliffe Road.

PC Kyriacou, who previously worked on the response team in Brixton before becoming a schools officer, said: “Where I grew up there was a lot of knife crime. You would hear about stabbings.

Working in response, I had a really great time – but you’re showing up and it’s already happened.

“I’m really passionate about crime prevention and making sure people know they have other opportunities and not just gangs.

“Growing up around that kind of stuff really makes you see it.

“Young people often don’t see behind the uniform, and it’s not cool to like the police.

“When I started going into schools, the kids were wondering why there were police in schools, and assumed I was there to arrest people, or stop and search, and they don’t realise that we’re here so they have someone to turn to for help.

“I didn’t realise how important sports could be to engage with people as an icebreaker.

“The kids would see the police uniform and say – you can’t dunk, you’re a police officer.

“They see you as a person, and it makes you approachable, so they begin to ask questions.

“I think having that rapport with the youth is so important, because when you’re young, people can do silly things and take the wrong paths.

“I hope that now the children feel like there is less of a barrier between us and them, and they will feel comfortable to turn to the police and ask for help and support, instead of taking things into their own hands.

“Working with the kids on the camp has definitely had an impact, I’ve bumped into some of the kids since, and they’ve stop to say hi, and tell me things that have happened that they said they would only speak to me about.”

He is one of the officers from the Central South Metropolitan Police force who have using their skills to engage young people before they fall into self-destructive habits.

Nigel Pearce, a community officer, wanted to bring the community together and focus on building stronger relationships and engagement between the police and young people.

Having previously worked as a safer schools officer, Nigel saw first-hand the difference connecting with young people could make and said: “I wanted to ensure that we build and strengthen long lasting relationships with the community and break down barriers between young people and the police.

“So, I put out the call for officers with any special skills that we could use in activities to engage with the public, and the response was massive, it really opened my eyes.

“My goal was to make young people feel like they can open up and speak to police officers, and for them to see the person behind the uniform.

“Collectively we are stronger together, and I’m really inspired to make a difference. 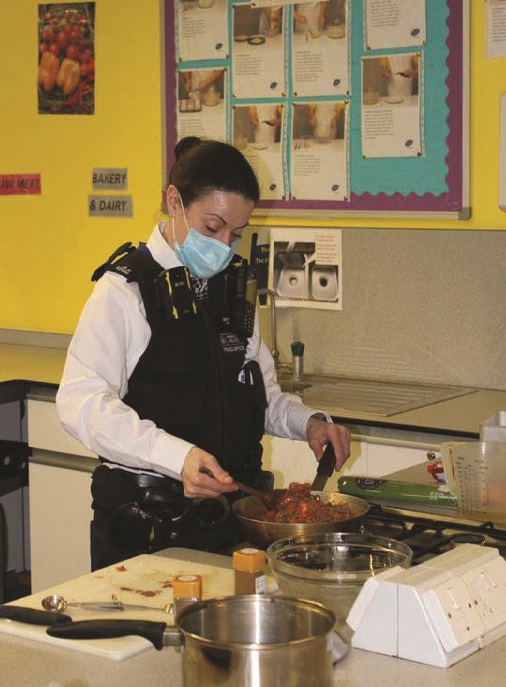 “In the future, I hope that if one of those children who had a massive smile on their face while they were playing basketball and learning circus skills wants to reach out to us and ask questions, they will have a little bit more trust.”

Many of the officers who came forward worked with the children at The Lambeth Summer Camp, a four-week camp for children aged nine to 16 who live or go to school in Lambeth.

Every year, more than 100 children from across the borough take part in the camp.

The camp, which includes day trips, sports, and workshops, is run  with the Me and many of the workshops focus on crime reduction and gang awareness.

PC Ross Farrer was in the circus for 12 years before he joined the Met, first as a circus act and then as a ringmaster, touring around the south of England.

After working at the summer camp Ross said: “Being a response officer, you are often seeing children when they are most vulnerable, and you are often seen as the bad guy, which makes it difficult to engage with them in that situation.

“Working at the camp, it was nice to speak to them as a police officer in an environment where they felt safe.

“Whether it was a case of playing catch with a younger child, or the older kid that’s taking on every trick that I could ever teach and still wants more, it was nice to see the children open up and ask questions.

“Children are often told: ‘If you do something wrong, the police will come and get you’.

“So they start to build a negative association with the police.

Sonia chose to work in the area because she thought she could add value to the community, being an officer of the same ethnicity as a lot of the residents and said: “I wanted to show the community that there is a change coming and I wanted to be part of that change.

“It was really nice to engage with the kids and I enjoyed sharing skills with them, it was a fun time.

“Kids often look at police as someone who arrests people and can get intimidated, but they could see us as people who can share.

“They ask questions and begin to open up to you.

“It was really nice to be able to slow the pace down and engage with them, at first some of the children couldn’t even hold the hair, but it was amazing to see the joy on their faces as they were actually able to grasp it.

“I loved working at the camp, I’ve already asked if I can be part of next year’s camp and then on an ongoing basis and hope to be a part of it for many years to come!”

As well as the camp, the officers also run a cook-along with the Ark Evelyn Grace Academy, Shakespeare Road, a bake sale to thank the NHS staff for their work during Covid, and in the future are planning a gardening project in the community.