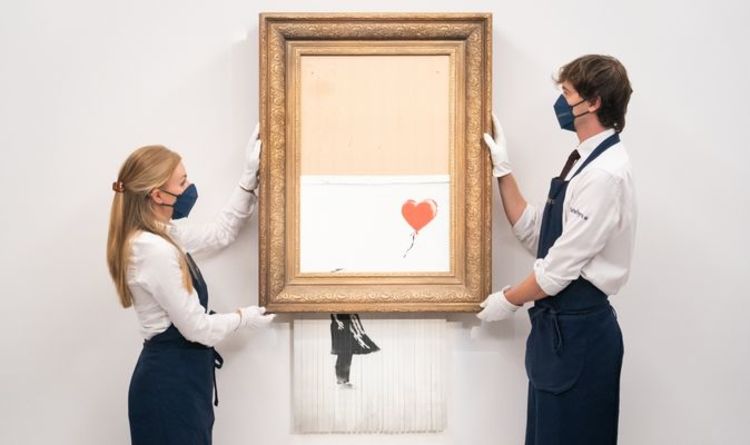 Banksy’s partially shredded painting has sold for a record-breaking £18,582,000 at a recent auction after it hit the headlines in 2018. The artwork named Love Is In The Bin was sold in London by auction house Sotheby’s at a record fee for the street artist.

The artwork outperformed its estimated selling price of around £4 million and £6 million.

The painting, previously referred to as Girl With Balloon, hit headlines in 2018 when it self-destructed.

The art shows a small child reaching up towards a heart-shaped balloon and it first appeared as a mural in 2002 in London South Bank.

However, Banksy destroyed the Girl With Balloon, after it had been sold at auction.

The painting was accompanied by the words “there is always hope” written just behind the girl.

The work was shredded after the winning bid of more than £1 million was made and accepted at the auction.

The mysterious Banksy posted a picture of the destroyed art piece on his Instagram with the caption “going, going, gone.”

Alex Branczik, chairman of modern and contemporary art at Sotheby’s Asia, said: “It is almost three years to the day since one of the most ingenious moments of performance art this century made auction history.

READ MORE: Who is Banksy? How does Banksy stay anonymous and is it Neil Buchanan?

Banksy displays his art on publicly visible surfaces such as walls and self-built physical prop pieces.

He no longer sells photographs or reproductions of his street graffiti, but his public installations are regularly resold.

Man accused of murdering London hostel resident by ‘stamping on him’