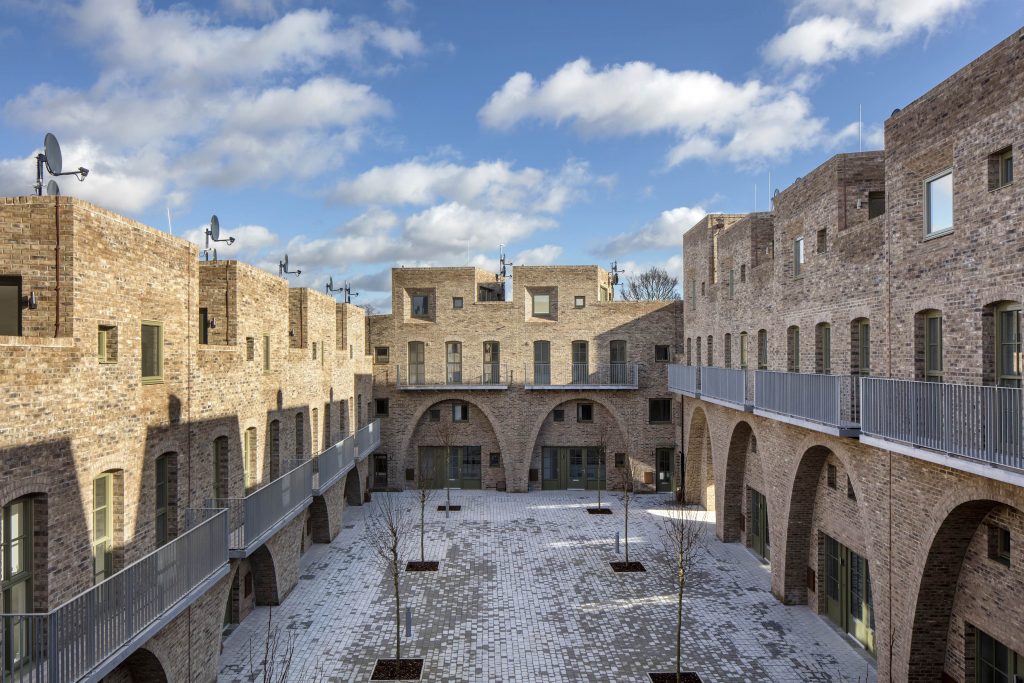 The London architect’s 26-home scheme at McGrath Road was announced as the second-ever winner of the prize, set up in honour of the council-housing pioneer, at the Stirling Prize ceremony in Coventry this evening (14 October).

Originally all shared ownership, half of the scheme was later turned into council homes after Newham’s mayor Rokhsana Fiaz pledged that all the council’s schemes would be 50 per cent social housing.

Jury chair David Mikhail, whose practice Mikhail Riches won the prize in 2019, said that in addition to its sheer inventiveness, the project had made a ‘huge contribution’ to the wider area.

He added: ‘The architects have moulded a place of character, both within the scheme and the community it serves. It demonstrates how imaginative street-based architecture can be socially progressive and architecturally engaging – a combination that endears Peter Barber Architects’ work to so many people.’

In a shortlist dominated by London housing, McGrath Road saw off competition from Maccreanor Lavington’s Blackfriars Circus in Elephant and Castle and another Barber scheme, 95 Peckham Road in Southwark.

The award, which was first given in 2019, sets out to celebrate schemes that demonstrate evidence of meeting the ‘challenge of housing affordability’. It requires at least a third of the homes in the development to be classed as ‘affordable’.

Speaking about McGrath Road, RIBA president Simon Allford said: ‘Intelligent, dynamic and original – this unique configuration of housing has the McGrath Road community at its heart. It’s an exemplar of high-quality social housing within one of London’s most densely populated boroughs and demonstrates what can – and must – be achieved across the country. It would, I am sure, have been championed by the late, great Neave Brown.’

The Neave Brown prize is one of a series of prizes won by Barber, who picked up five regional RIBA awards in August and was recently awarded the AJ100 Contribution to the Profession Award 2021.

That year the prize faced some criticism from architects including Kate Macintosh, Jane Duncan and Bell Phillips’ Hari Phillips, who said the award should celebrate social housing, not ‘intermediate’ affordable housing such as shared ownership or discounted rents.

Neave Brown, who died in 2018, designed some of Britain’s most imaginative post-war public housing, including Alexandra Road and Dunboyne Road Estate, both in Camden.