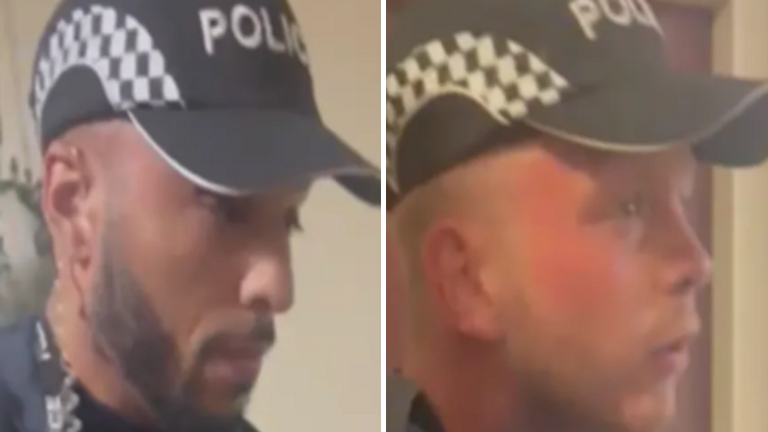 Scotland Yard are investigating after a viral video appeared to show two men impersonating police officers to try and enter a home in east London.

Responding to the clip on Thursday, the Metropolitan Police issued a statement saying they are aware of the footage “circulating on social media filmed in east London appearing to show two men impersonating police officers”.

In the video, filmed by what seems to be one of the property’s residents, two men can be seen dressed in clothes that resemble police uniform and standing in the doorway of a flat.

The men – who wore police caps, harnesses, purple disposable gloves and dark clothes – appear to have just tried to enter the home.

A woman starts filming the encounter and can be heard repeatedly asking the men for their identification.

Image:
Police said they want to speak to these two men

The pair refuse with one claiming that they are not required to show one.

Both men can be seen trying to hide their faces as she films, while one attempts to grab the woman’s phone before pulling out a baton.

The men then start to leave, walking down a corridor and a flight of stairs in the building while the woman continues to film them.

The woman then says: “Misunderstanding coming in my house like that. You come in like a terrorist.

“I told you to explain… you went by force in my house.”

The woman, and another man who cannot be seen, then follow the pair out of the building and down the street. Image:
Police were called to The Shaftesburys in Barking on Tuesday evening

One of men uses a radio to seemingly call for back-up, labels the residents aggressive and accuses them of selling cannabis.

He speaks into the radio and says: “She stalking me down the road”.

In a statement, Scotland Yard said: “Police were called at 18:51hrs on Tuesday, 12 October to a residential block in The Shaftesburys, Barking IG11.

“A woman reported that two men had attended her address. They were claiming to be police officers and were dressed in crude uniform including caps, harnesses and ‘asps’ (batons) and said they were there to search the property.

“They were initially allowed in before the residents became suspicious and asked to see their identification, which they could not produce.

“Upon being further challenged the suspects left the address. They were followed and fled in the direction of Abbey Road.”

The force said police conducted a search of the area but the two men were not found.

No physical injuries were reported and police said they do not believe that anything was stolen from the address.

The force added that the investigation is ongoing and there have been no arrests at this time but are appealing to talk to the two men pictured.

“Unfortunately, there have been occasions when fraudsters have posed as police officers, both in person and on the phone, to trick people into giving them personal information and defraud them of money,” police said.

“If one of our officers contacts you in person, they’ll show you their police warrant card. This is proof of their identity and authority.”